Lack of details on force cuts fuels concern among airmen 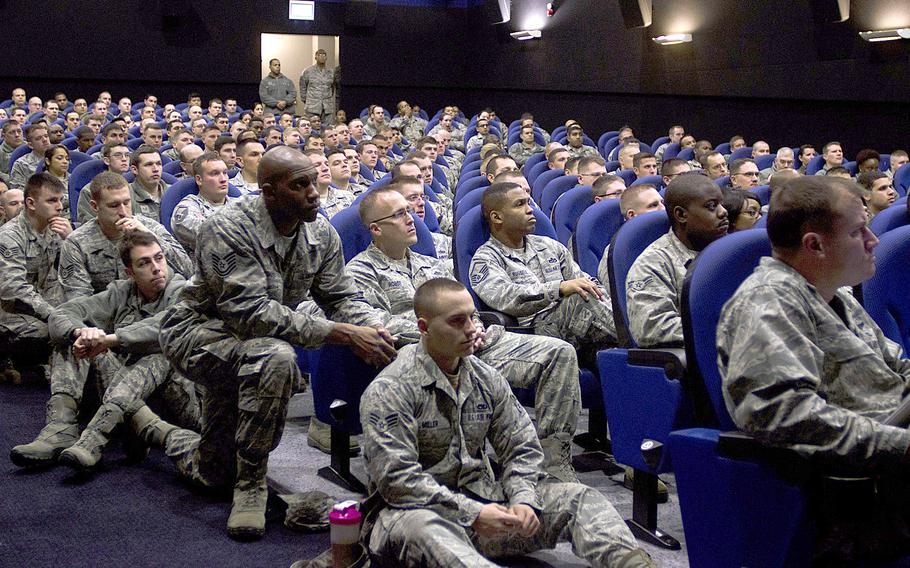 Buy Photo
The first, announced meeting about force reduction at RAF Mildenhall, England, had so many attendees that some airmen sat in the theater's aisle on Wednesday, Dec. 18, 2013. Meetings have been announced at Air Force bases around the world to discuss the recent announcement that up to 25,000 active duty slots would be cut. (Adam L. Mathis/Stars and Stripes)

About a week after the Air Force announced sweeping force reduction measures, airmen still have questions as they contemplate their future in a shrinking force.

Briefings held at U.S. Air Forces in Europe bases this week to discuss the service’s plan to trim up to 25,000 enlisted and officer positions due to budget constraints, allayed some fears, but left many airmen with more questions than answers.

The Air Force has decided to be “a little scarier upfront,” said Col. Kenneth T. Bibb Jr., commander of the 100th Air Refueling Wing at RAF Mildenhall, England. In the past, voluntary force reduction measures were announced first, followed by involuntary ones. But this time, Bibb said, the Air Force announced all of its force-reduction initiatives upfront.

And that left some airmen feeling uncertain about their future in the service.

At the time of the meetings, the Air Force had not released all the details about its personnel-trimming measures. Many of the early-retirement or release-from-service programs hinge on removing slots from overstaffed career fields, but those fields have yet to be identified.

Also in question is how much money airmen will get if they choose to leave the Air Force early. Maj. Ryan Richardson briefed airmen Monday at a Lakenheath town hall meeting with a slide show provided by the Air Force Personnel Center, but he could not provide specifics about how much money an airman would get for early retirement.

“These programs (for early dismissal of airmen) will evolve as the fiscal environment evolves,” Richardson said.

After the meeting, at least one noncommissioned officer said he was very concerned about losing his pension. He asked not to be identified, but said he had served in Iraq and had planned his future with a pension in mind.

“(I) put myself in harm’s way … no matter how much fun it wasn’t, I always kept going” to get a pension, he said.

Lt. Col. Albert Franke, commander of the 100th Communications Squadron at RAF Mildenhall, said when the force cuts were announced, he was concerned about the effect on his unit’s morale.

Those with blemishes ON their records may have the most to worry about.

“They said really clearly, ‘This is a really bad time to get in trouble,’ ” said Master Sgt. Stephen Zimmerman, 35, a cybertransportation systems specialist with the 86th Communications Squadron, after attending a meeting Wednesday at Ramstein Air Base, Germany, about the upcoming personnel changes. “They’re going to look at people who had disciplinary issues, performance issues. ‘We want the cream to stay in.’ ”

Those so-called “negative quality code indicators” could be anything from an Article 15 or failed physical fitness test, to a “driving while under the influence” charge, airmen at Ramstein said.

“I’m not going to lie. I do believe there’s some waste there,” said Master Sgt. Clyde Hardy, 39, of the 1st Combat Communications Squadron. “They’ve retained some people who should be out. If you can give yourself an honest look at what you’ve done in your career and honestly say … ‘Hey, I helped the Air Force,’ then you have nothing to worry about. But if you look back and just slid through, ‘Bye-bye.’ ”

It isn’t known when more information on the cuts will be released. An Air Force spokeswoman at the Pentagon said information about voluntary separation pay and early retirement boards could come as early as this week, but expected it to be a few days late.

With no more information, officials have been telling airmen to update their records and to think about whether they want to continue with a career in the Air Force.

“We owe you more information,” Richardson said at the end of the Lakenheath meeting.

This is an embedded Microsoft Office presentation, powered by Office Web Apps.