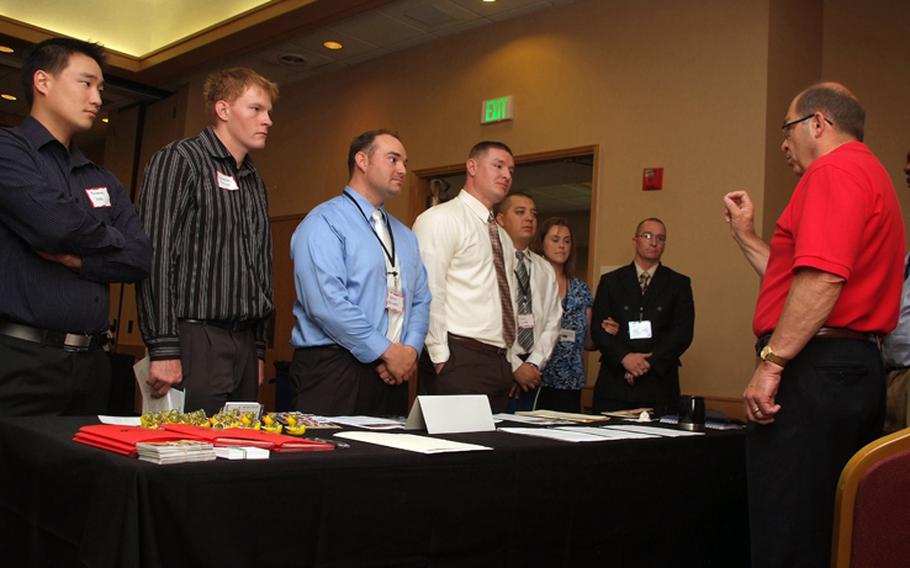 WASHINGTON &mdash; Post-Sept. 11 veterans had a tougher time finding work in 2011 even as the overall veterans employment situation improved slightly from the year before, according to new data from the Department of Labor.

The figures suggest that even with recent encouraging trends in the job market, officials still face a formidable challenge in finding careers for thousands of young veterans.

According to a Bureau of Labor Statistics report released Wednesday, veterans who served in the Iraq and Afghanistan War eras averaged a 12.1 percent monthly unemployment rate in 2011, slightly worse than the 11.5 percent average from a year earlier.

In contrast, both the national unemployment rate and jobless claims for all veterans dipped slightly during that span. Nearly 1 million of the 12.3 million Americans looking for work last year were veterans, and nearly a quarter of them left the military in the last decade.

Officials have reported improving veterans unemployment numbers since the start of 2012 &mdash; February data showed a 7.6 percent jobless rate for post-Sept. 11 veterans, the lowest figure since 2008 &mdash; but Labor Secretary Hilda Solis said in a statement Wednesday that the yearly figures show more work still needs to be done.

&ldquo;Our veterans have made sacrifices on behalf of the nation, and I ask all employers to renew their commitment to veterans, because the best way to honor our veterans is to employ them,&rdquo; she said. &ldquo;No veteran should have to fight for a job at home after fighting to protect our nation.&rdquo;

Ryan Gallucci, deputy director of the Veterans of Foreign Wars&rsquo; national legislative office, said the new report serves as &ldquo;a powerful reminder of why we have to stay vigilant&rdquo; on the unemployment issue.

&ldquo;This shows just how bad the situation has been for veterans,&rdquo; he said. &ldquo;We were encouraged by what we saw in February, but just because the February numbers were good, that doesn&rsquo;t mean this no longer needs to be a priority.&rdquo;

Retired Gen. James Jones, former national security advisor to Preisdent Barack Obama and now the co-chair of the Call of Duty Endowment, said many employers he speaks with still have little first-hand knowledge of the military and the skills veterans bring to the civilian workforce.

When they learn more about both, he said, &ldquo;the logic of hiring them is inescapable.&rdquo;

The endowment, founded in 2009, is focused on job training and job placement programs for veterans. Jones said while the 2011 unemployment numbers are daunting, &ldquo;I also think a year from now I expect to see the numbers moving in the right direction.&rdquo;

Veterans have been able to find jobs more easily in state and government posts than their civilian counterparts, according to the report. Nearly 22 percent of veterans jobs were in that sector in 2011, compared to just 14.3 percent of civilian jobs.