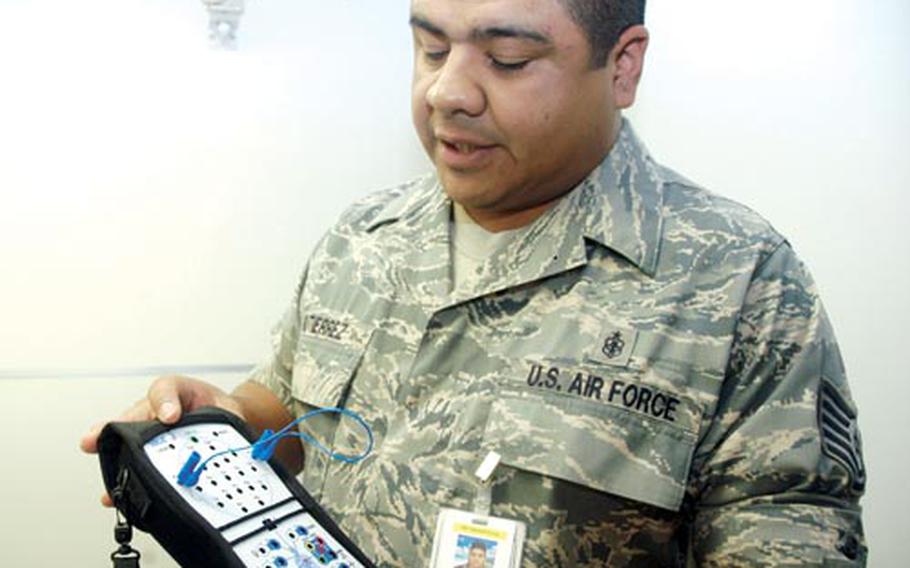 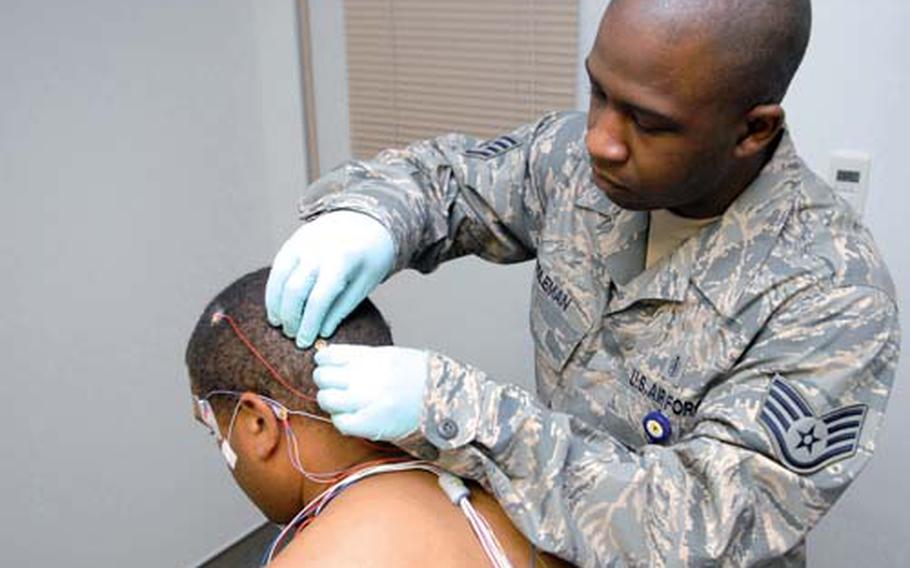 Staff Sgt. Ormondu Coleman, a cardiopulmonary technician with the 18th Medical Operations Squadron, removes sensors from a patient after he wakes up from his sleep test. The lab helps treat and diagnose sleep disorders. (Courtesy Photo / U.S. Air Force)

KADENA AIR BASE, Okinawa &#8212; Servicemembers agonizing over sleepless nights may finally get some rest thanks to a new sleep lab.

The lab, run by the 18th Medical Operations Squadron at Kadena, helps diagnose and treat sleep disorders in servicemembers and Department of Defense civilians.

For years, patients suffering from sleep problems would have to seek treatment out in town, which can be expensive, he said.

Crawley said as public awareness regarding sleep disorders increases, so does the number of patients seeking help.

Insomnia and obstructive sleep apnea, where breathing is interrupted during sleep, are frequent complaints, he said.

Since the lab opened three weeks ago, the waiting list has grown to 30 patients, Crawley said.

"Our culture as a whole is sleep-deprived," he said.

Crawley said adults need a minimum of eight hours of sleep each night, and children need even more, up to 12 hours.

For military members, especially, a good night&#8217;s sleep can be hard to come by.

"Lots of shift work can make it difficult to get a regular sleep pattern," he said.

Sleep disorders are often associated with heavy snoring and excessive sleepiness during the day. Being overweight can make them worse.

"You learn to live with it," he said.

After completing a study at the lab Monday, he said a diagnosis and treatment for his sleep problems will bring relief.

Hill said he&#8217;s struggled with sleep deprivation for 17 years, but he didn&#8217;t seek treatment out of fear of being dismissed by the Air Force Medical Evaluation Board.

Although his sleep problems never directly interfered with his ability to do his job, Hill said, he finally decided to schedule an appointment with a clinic in Naha.

Then, the sleep lab at the 18th Medical Group Clinic opened at the right time.

The lab has two rooms equipped with comfy queen-size beds, diagnostic machines and electrocardiogram, or EKG, sensors that collect data on a person&#8217;s sleep patterns, including heart disturbances and brain activity.

Patients must be referred to the lab by their primary care physicians.

Servicemembers from mainland Japan or South Korea can be seen at the lab on Kadena Air Base or at a sleep lab in their area, Crawley said.

"It is often easier logistically for servicemembers to be seen in a sleep lab closer to home if it is available," he said. "Physicians contact us if they have questions about local sleep lab results or treatment modalities."

Treatments for sleep disorders vary. In cases of mild obstructive sleep apnea, orthodontic devices and stints can be used to open up the airways to decrease restricted breathing, Crawley said.

In severe cases, surgery may be considered.

Gutierrez said people can do their part to make sure they get adequate sleep. Regular exercise is important, but should be avoided right before going to bed, he said.