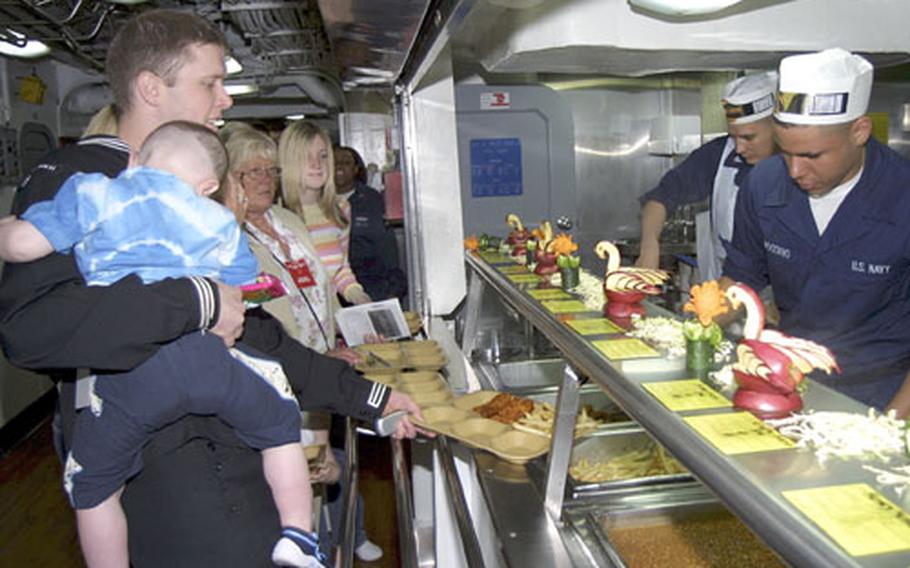 Machinist&#39;s Mate Third Class Scott D. Smith and several of his family members move through the line on the ship&#39;s mess deck during a visit to Dublin. (Courtesy of U.S. Navy)

The Gaeta, Italy-based 6th Fleet flagship made a port visit to the land of Guinness from May 17 through Saturday.

It was the ship&#8217;s first stop in Ireland &#8212; and its farthest trip north &#8212; since the 6th Fleet area of responsibility expanded to include the North Atlantic in 2002, said Senior Chief Petty Officer Scott Fleming, fleet spokesman.

&#8220;The purpose, really, was to promote goodwill between the two countries,&#8221; he said in a phone interview from the 6th Fleet flagship.

For most of the visit, the 700 sailors explored Dublin, from St. Patrick&#8217;s Cathedral to the Guinness brewery. Fleming said there were no incidents in the city, famous for its nightlife.

Some, including Petty Officer 2nd Class Megan Williams, ventured into the countryside. She took a daylong Celtic history bus tour.

His mother, brother, sister, nieces and nephew waited at the pier for him last week. They toured the ship, ate on the mess decks and met Capt. Herman A. Shelanski, the commanding officer.