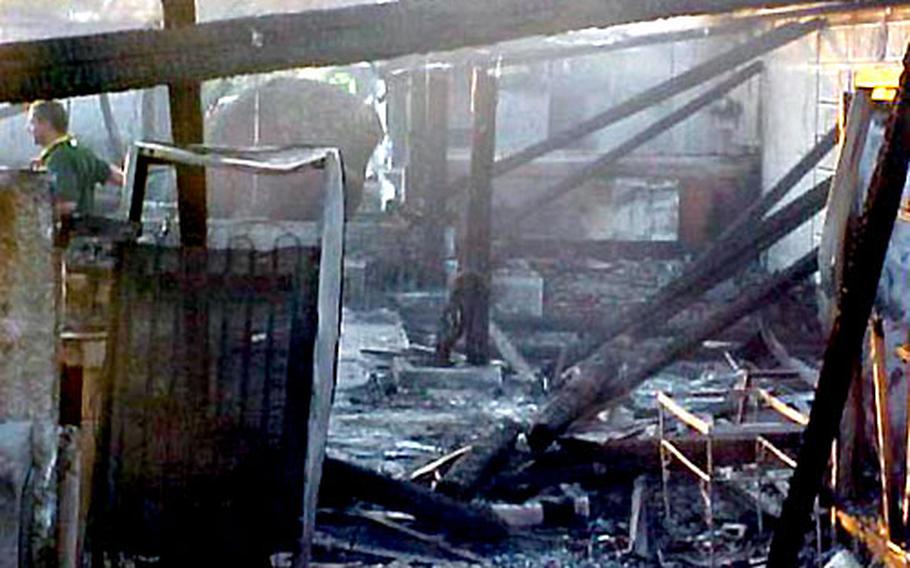 Six members of Naval Support Activity La Maddalena’s security department evacuated about two dozen people after a fire in this field in Palau, Sardinia, burned down a restaurant and a handful of apartments. (Carrie Wesby / Courtesy of U.S. Navy)

Security forces from Naval Support Activity La Maddalena, Italy, helped evacuate about two dozen people from the path of a fast-moving brush fire in the town of Palau last week.

The fire destroyed a restaurant and a handful of apartments. There was no damage to U.S. military property.

Petty Officers 2nd Class Matthew Sloan and Dylan Spencer and Seaman Brandon Badeau helped with the evacuation and removed a number of bombola propane tanks from buildings near the fire, which broke out around 4 p.m. last Wednesday.

Sloan, a security supervisor and former volunteer firefighter, was working with Spencer and Badeau to inspect a water taxi when they saw smoke rising near Palau&#8217;s small Navy Exchange. They found that a field had caught on fire and flames were racing toward the restaurant, apartments and homes.

Spencer, who was an emergency medical technician before enlisting, found a mother and her two children in one apartment. The group found others still sleeping.

Sloan evacuated a chief petty officer, who works aboard the La Maddalena-based USS Emory S. Land, stuck on the roof of his apartment.

Sloan ended up catching the chief as he jumped the eight feet from his balcony. The chief&#8217;s apartment suffered heavy smoke damage but only a little fire damage.

Within an hour of the blaze starting, firefighting aircraft and helicopters were on scene, along with the local fire department.

As the blaze started to consume the buildings, smoke and flames got thicker and the three retreated from the apartments.

&#8220;We all met up again and headed over to where I live,&#8221; Sloan said. Petty Officer 3rd Class Jeffrey Shelton met them in front of the apartment building.

A short while later the patrol team of Petty Officer 2nd Class Meisha Johnson and Seaman Brenna Wheatley arrived and they began directing people away from the area, which was still clouded in smoke.

According to Ensign Joseph Kenoyer, La Maddalena&#8217;s security officer, the six are being recommended for Navy and Marine Corps Achievement Medals for their actions.