La Maddalena says goodbye to base after 35-year U.S. Navy presence on Sardinia 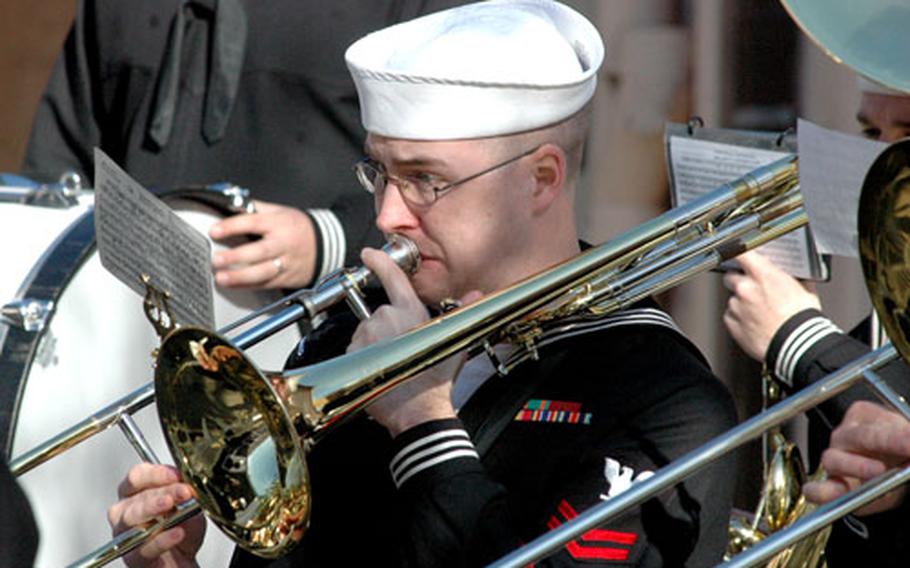 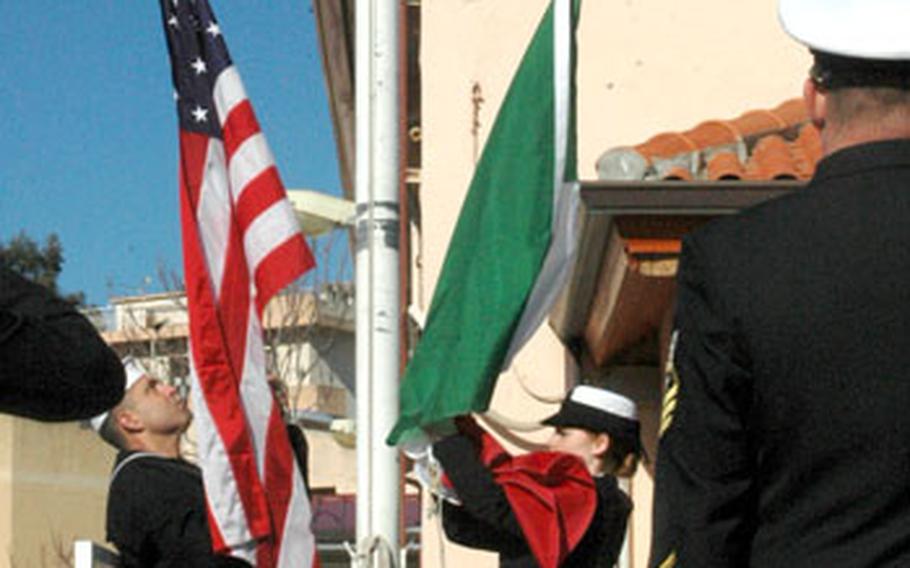 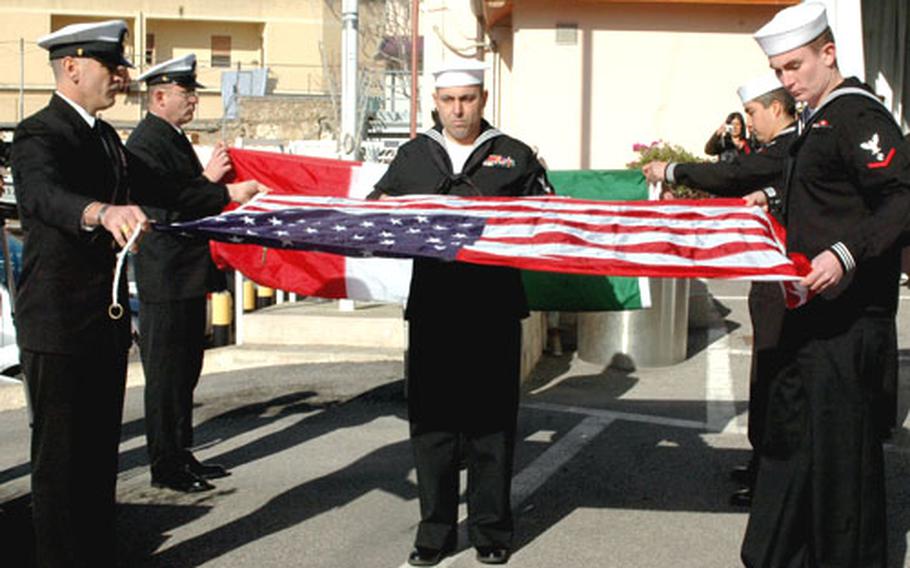 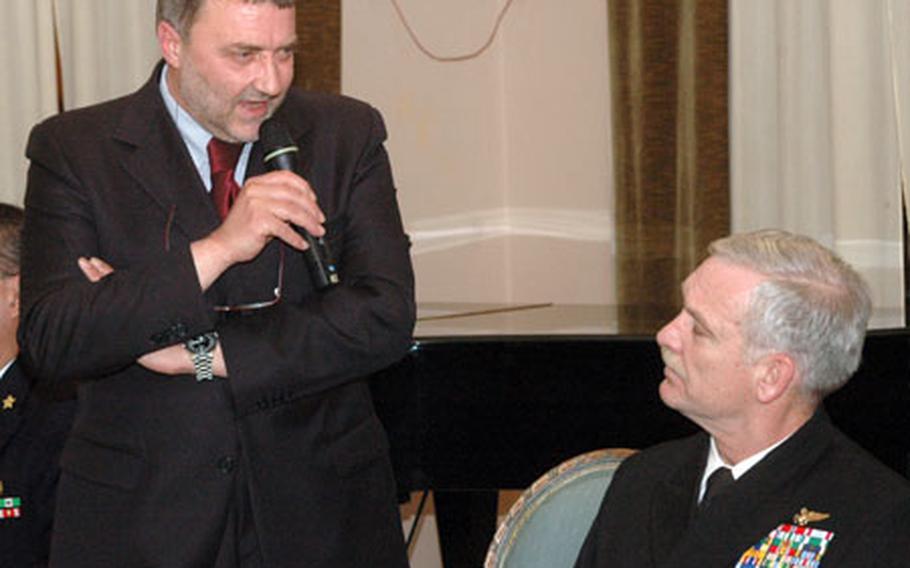 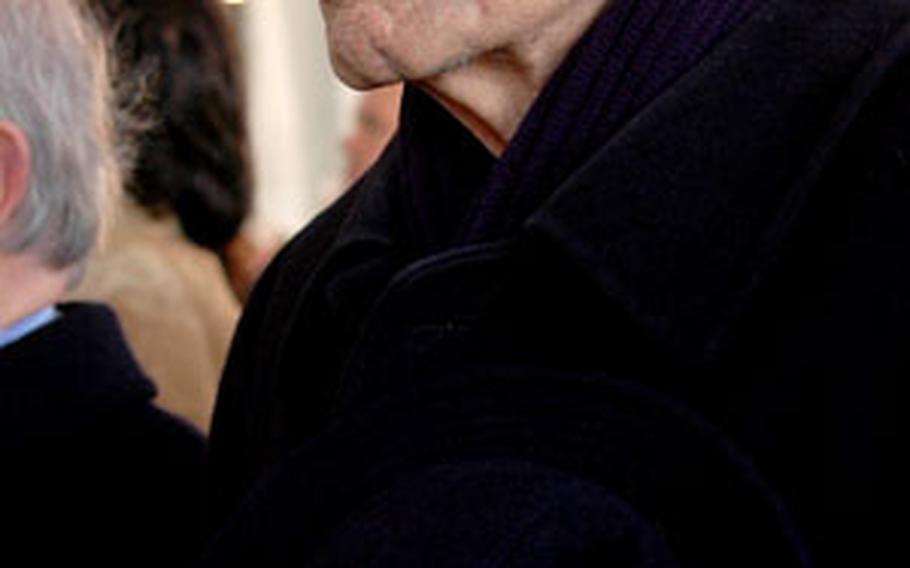 An elderly gentleman stands for the playing of the Italian and U.S. national anthems Friday during the base closure ceremony at Naval Support Activity La Maddalena. (Sandra Jontz / S&S)

LA MADDALENA, Italy &#8212; With a few words, Capt. Gregory Billy brought an end to more than three decades of U.S. Navy presence on the tiny and pristine island in the archipelago in northern Sardinia.

The Italian and U.S. flags then were lowered for the last time at this aging naval base set up 35 years ago during the Cold War to fight the former Soviet Union. It has been home to six U.S. ships and thousands of sailors and their families.

Its contentious history is juxtaposed sharply against the breathtaking surroundings that made Friday&#8217;s closure ceremony bitter for Navy personnel, who often thought of a tour of duty here as a posh assignment.

The strategically located base was set up by secret accord between U.S. and Italian officials, without the blessing of the Italian Parliament. It served as a logistical and technical hub for submarines transiting the Mediterranean Sea and on the hunt against the Soviets.

But now U.S. naval assets, already strained, are needed elsewhere to combat changing threats to world stability, Rear Adm. Michael Groothousen, commander of Navy Region Europe, told the crowd attending the ceremony at the base, which should be completely shut down by the end of February.

Enzo Satta, local minister for urban affairs, said he understands the reality behind the Navy&#8217;s decision to close the base, but wished the closure had been phased in over several more years. Former Defense Secretary Donald Rumsfeld stunned officials &#8212; both U.S. and Italian &#8212; with a surprise announcement in November 2005 of the Navy&#8217;s intentions to leave Naval Support Activity La Maddalena, commonly called La Madd.

Two years is not enough for the local government to court public and private investment ventures to fill the cash void left by the Navy&#8217;s departure, Satta said. Tourism drives the island&#8217;s economy, and it takes a lot of time to cut through the Italian bureaucracy&#8217;s red tape before any new construction can begin, he said.

During a ceremony Friday at the town hall, Mayor Angelo Comiti delivered uncharacteristic praise of the Navy&#8217;s presence.

&#8220;I say with all sincerity, in 35 years, [the two nations] had an exemplary relationship,&#8221; he told a packed hall in a departure from his previous public criticism.

Many Italians of the island reportedly opposed the U.S. presence, both on La Maddalena and the island of Santo Stefano, where the submarine tender USS Emory S. Land moored until it left for good in September. The Navy&#8217;s primary mission was to provide technical and logistical support to nuclear-powered submarines &#8212; a point of contention among Italians, especially following an incident in 2003 when a submarine ran aground in nearby shallow waters.

But not all Italians opposed its presence &#8212; especially the 178 Italians who worked there. For 20 years, Franco Ugazzi drifted between departments, from front desk clerk in bachelor housing to eventually teaching intercultural relations classes. He said that although the Italian government enacted a law guaranteeing employees would be absorbed into public sector jobs if they lost employment due to a foreign military base closure, it didn&#8217;t guarantee a job in the same city or at the same salary.

Through the U.S. priority placement program, 16 Italian employees accepted jobs at other U.S. bases in Italy. Others, like Ugazzi, are holding out hope for jobs that will keep them in La Madd.

A handful of U.S. sailors will remain at La Madd until the official Feb. 29 closing. Petty Officer 3rd Class Wendy Cassanova, 25, will be one of the last to leave.

As a personnel specialist and the transportation clerk, she has to make sure everyone&#8217;s paperwork and travel arrangements are in order.