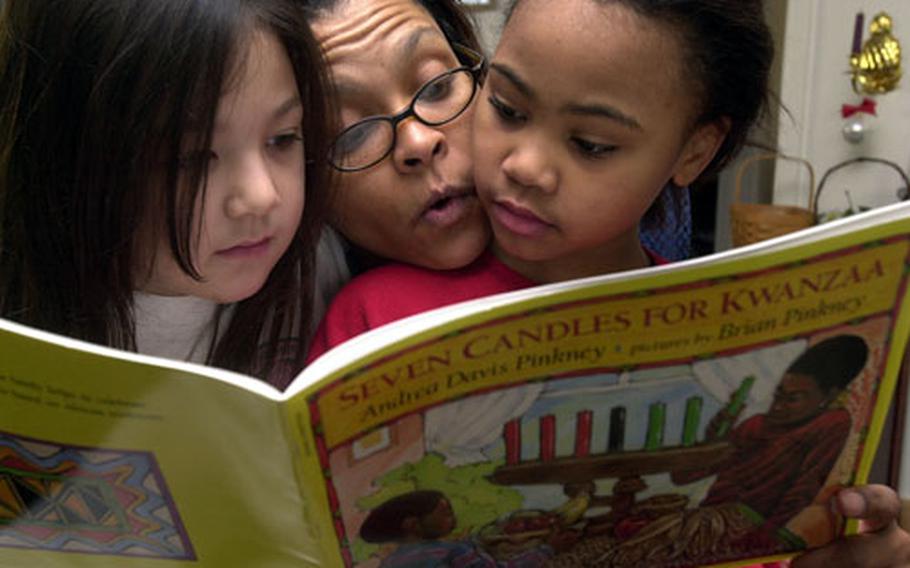 Depending on who you ask, Kwanzaa is either an African religious festival celebrating the winter harvest, a Black Panther-era separatist holiday or a contrived black alternative to Christmas.

Some tell you the holiday has been around for centuries, with others saying it started about 10 years ago. Or maybe it started sometime in the mid-1960s. Others say it has origins in the United States, although they don&#8217;t agree on where exactly.

But one thing appears certain in the Pacific: Not many people celebrate Kwanzaa here.

The name Kwanzaa comes from the Swahili phrase, &#8220;matunda ya kwanza,&#8221; meaning &#8220;first fruits.&#8221; It was created in 1966 by Dr. Maulana Karenga, a professor and chairman of the Department of Black Studies at California State University, Long Beach.

According to his Web site, www.officialkwanzaawebsite.org, Karenga created the holiday, which is marked from Dec. 26 to Jan. 1, to bring &#8220;a cultural message which speaks to the best of what it means to be African and human in the fullest sense.&#8221; He claims it&#8217;s celebrated by millions throughout the world.

But bases in the Pacific, contacted by Stars and Stripes, said they had nothing planned to observe it.

This lack of Kwanzaa spirit, however, doesn&#8217;t seem to affect many base residents.

&#8220;Most people prefer a traditional Christmas celebration, and besides, Kwanzaa is just sort of made-up anyway,&#8221; said one man at Camp Zama, Japan, who asked not to be identified. &#8220;I used to teach it when I taught in St. Louis, but everyone I know prefers a regular Santa Claus and a regular Christmas.&#8221;

Because of the holiday&#8217;s timing, some mistake it for a religious alternative to Christmas.

The confusion over the holiday&#8217;s meaning can turn some people off, said Wanda Abrams, who has attended Kwanzaa gatherings in the past.

The Seven Principles of Kwanzaa can apply across a broader spectrum of people, not just African-Americans, Abrams said.

According to the Web site, Karenga said Kwanzaa should be &#8220;engaged as an ancient and living cultural tradition which reflects the best of African thought and practice in its reaffirmation of the dignity of the human person in community and culture, the well-being of family and community, the integrity of the environment and our kinship with it, and the rich resource and meaning of a people&#8217;s culture.&#8221;

&#8220;You do something with candles, but I&#8217;m not really sure. One of my aunties does it back home. You usually get together to talk about family and friends and how you relate to them.&#8221;

&#8220;My knowledge about it is pretty limited,&#8221; said Army Master Sgt. Greg Morrison of Fort Gordon, Ga., who was visiting Camp Zama with his wife, Lole. &#8220;I know it involves seven days, and on each day, you&#8217;re supposed to go over a different principle.

But some families do observe Dr. Karenga&#8217;s brainchild.

D&#8217;Juana Cephus, a resident of the Sagmiahara Housing Area near Camp Zama, said while she doesn&#8217;t have all the symbols of the holiday, such as the Kinara (candleholder) or Kikombe cha Umoja (the unity cup), &#8220;I do have a book and a tape of Kwanzaa music.&#8221;

In her home, in the shadow of a gorgeous Christmas tree adorned with traditional ornaments, she sits with her daughter, Raquel, 8, and sifts over the glossy book, explaining each of the Nguzo Saba, or Seven Principles of Kwanzaa.

Imanni, or faith, is the most important principle to Cephus.

When her husband, Army Maj. Randall Cephus, was stationed at Fort Hyuchuca, Ariz., a committee met and planned events to mark Kwanzaa.

Although Cephus watched a couple of programs on AFN with her family, she said it wasn&#8217;t the same as seeing a community event or live production.

In her home, Cephus taught her children about the colors of the seven Kwanzaa candles: three red, three green, surrounding a single black candle. She said the green stood for land, the red for bloodshed of people of African descent everywhere. And the black candle signifies unity of all into one people.

The Seven Principles of Kwanzaa

The Nguzo Saba (Swahili for the Seven Principles) was developed by Dr. Maulana Karenga and are a central part of Kwanzaa. Each principle, along with its Swahili word, is explained below.

&#8226; Umoja (Unity)To strive for and maintain unity in the family, community, nation and race.

&#8226; Ujima (Collective Work and Responsibility)To build and maintain our community together and make our brother&#8217;s and sister&#8217;s problems our problems and to solve them together.

&#8226; Ujamaa (Cooperative Economics)To build and maintain our own stores, shops and other businesses and to profit from them together.

&#8226; Nia (Purpose)To make our collective vocation the building and developing of our community in order to restore our people to their traditional greatness.

&#8226; Kuumba (Creativity)To do always as much as we can, in the way we can, in order to leave our community more beautiful and beneficial than we inherited it.

&#8226; Imani (Faith)To believe with all our heart in our people, our parents, our teachers, our leaders and the righteousness and victory of our struggle.