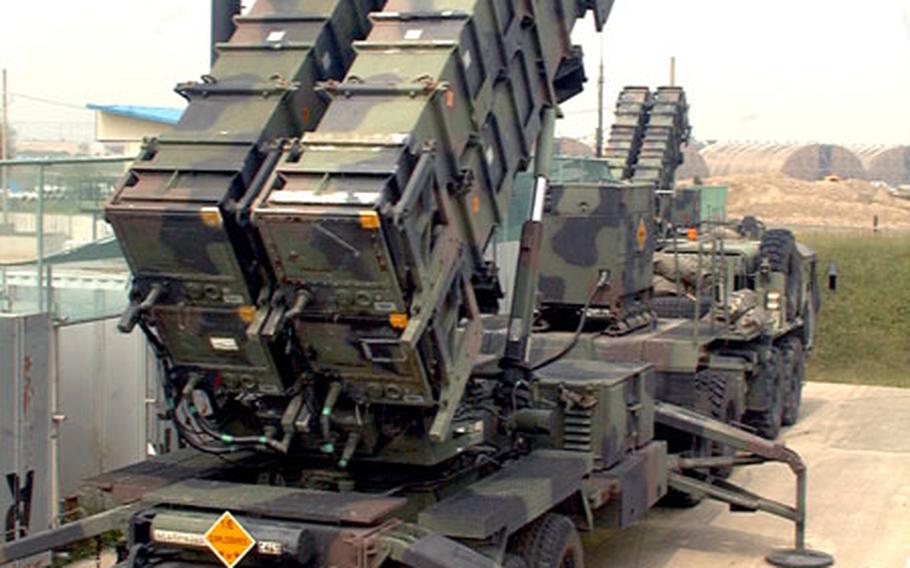 OSAN AIR BASE, South Korea &#8212; The U.S. Army will deploy an additional Patriot missile unit to Kwangju, South Korea, this month, combining it with missile units already on the peninsula to form a single Patriot brigade.

The 35th Air Defense Artillery Brigade will be headquartered here, 48 miles south of the Demilitarized Zone. Commanded by an Army colonel, it will comprise two Patriot missile battalions with missile batteries at four air bases on the peninsula, officials said.

Two elements of the new brigade, totaling about 425 troops, will deploy later this month from Fort Bliss, Texas, to Kwangju in southwestern South Korea. The 2nd Battalion, 1st Air Defense Artillery, and the 178th Maintenance Company will occupy a U.S. compound at Kwangju Air Base, a South Korean Air Force installation. Another 125 soldiers, also deploying from Fort Bliss, will be based at Osan with the brigade headquarters, 8th Army officials said.

The 1st Battalion, 43rd Air Defense Artillery, already stationed in Korea, has Patriot batteries at Osan, Kunsan Air Base on Korea&#8217;s western seacoast, and Suwon Air Base. Suwon is a South Korean air base.

The brigade will number about 1,200 troops.

Patriot missiles are designed to knock out incoming aircraft, cruise missiles and tactical ballistic missiles. Entering service in the 1980s, the system first was used in combat during the Persian Gulf War in 1991.

The Korea-based brigade will be equipped with both the PAC2 and newer PAC3 Patriot variants.

The new Patriot deployment comes as part of a May 2003 agreement between the United States and South Korea to spend $11 billion to enhance the peninsula&#8217;s military defenses.

&#8220;The 35th Air Defense Artillery Brigade is coming to the peninsula to fulfill&#8230; mutually agreed on plans to provide a more robust and enhanced air defense capability on the peninsula,&#8221; Johnson said.

But the deployment of 2nd Battalion and the maintenance company to Kwangju is only an &#8220;interim&#8221; move for three to five years, while South Korea proceeds with plans to buy its own missile defense system, officials said.

Not yet clear was where the battalion would go then, because the U.S. military still is working out details of how it will reposition its troops on the peninsula in coming years, Johnson said.

A small advance party of brigade personnel is in South Korea now making final preparations for the main body&#8217;s arrival sometime within the next several weeks, Johnson said.

&#8220;This has been a concentrated effort supported by many units, to include Seventh Air Force, to prepare the logistics needed for these additional units,&#8221; Johnson said.

&#8220;There has been massive effort this summer, preparing facilities down at the Kwangju Air Force base ... as well as doing ... much more limited work at Osan, preparing to receive the headquarters element,&#8221; she said.

Because Kwangju has a history of anti-American sentiment dating to political events there in 1980, the U.S. military has taken special steps to pave the way for smooth relations between the soldiers and the South Korean public.

&#8220;Because they are deploying to a sensitive area &#8230; a region famous for its democratic movement and its populist kind of fervor, we went back there to heighten the awareness of the soldiers even before they got to the peninsula, on ... the whole cross-cultural aspects of coming to Korea,&#8221; he said, &#8220;and &#8230; some of those command messages on the command&#8217;s policy on prostitution and human trafficking.&#8221;