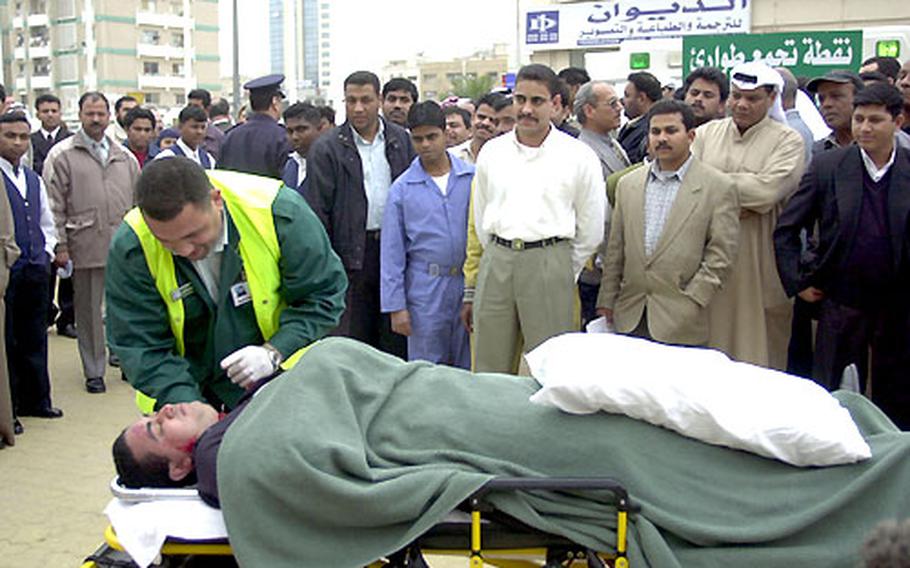 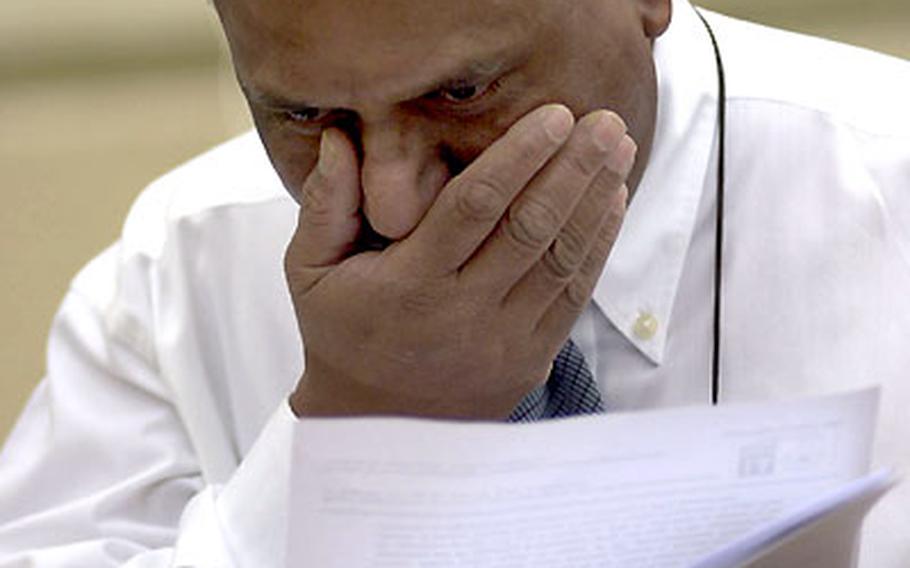 An evacuee in an emergency drill in downtown Kuwait City chokes on smoke from cannisters designed to simulate an attack. (Joseph Giordono / S&S) KUWAIT CITY &#8212; The daily tests of air raid sirens and civil defense systems hardly draw a second glance since they began in earnest last fall, but that has not stopped most Kuwaitis from preparing for the worst.

As the United States and Iraq inch closer to a military confrontation, retail outlets and government agencies say citizens of this tiny Persian Gulf state are getting serious about buying gas masks and emergency supplies.

With memories of the seven-month Iraqi occupation and the ensuing 1991 Persian Gulf War still fresh, many Kuwaitis fear they could be caught in the middle. The buildup of U.S. troops there also make Kuwait a likely target.

&#8220;But I think that people know now that it is serious and not like the talk about war before. Perhaps Saddam will send a chemical missile to the American base. If it misses, it will hit Kuwait. We must be prepared.&#8221;

That, al-Awadi said, is why he purchased gas masks for himself, his wife and his son a few months ago.

A spokesman for al-Ghanim Electronics, one of the largest discount retail chains in Kuwait City, says its stores have sold about 20,000 gas masks in the past month.

At one of the al-Ghanim outlets that has masks in stock, a lone gas mask was casually displayed on a glass shelf next to hair driers, curlers, kitchen mixers and other appliances.

The mask, described by a salesman as &#8220;an older Chinese model,&#8221; retails for 25 Kuwaiti dinars, or around $75. The black rubber mask features two large, glass eyeholes and a filter canister near the mouth. Each mask comes with one filter; each additional canister runs about 8 dinars, or $24.

Officials at Kuwait&#8217;s Civil Defence Department say they are working to purchase 2 million gas masks, which will be distributed to Kuwait&#8217;s 2.2 million residents at &#8220;subsidized&#8221; prices.

But one official said the masks have yet to be distributed, and he could not provide a number for how many have actually been procured.

Among those preparations are activating emergency plans for hospitals, roads and water supplies in a country about the size of New Jersey.

According to Col. Majar Ameer Khamal of the Civil Defence Department, a ring of American-made Patriot Missile batteries manned by the Kuwaiti military protects the city. U.S. military and U.S. Embassy officials did not return phone calls Tuesday asking if they offered training or other help to the Kuwaitis.

Tests of the civil defense sirens are coupled with mass-casualty drills and simulated evacuations; posters around town give instructions on what people should do in case of an attack.

The posters cover a range of emergencies, including bombings and chemical or biological attacks. Essentially, they all impart the same instructions: Listen for the sirens, find a shelter and hope for the best.

Civil defense officials also suggest residents construct temporary shelters in their homes by sealing off an interior room and stocking it with water and other supplies.

Kuwait&#8217;s state television stations begin most broadcast days with public service announcements, explaining the meaning of various warning sirens, al-Buti said. One long blast means an attack is imminent; a second means an attack is under way; a third means &#8220;all clear.&#8221;

All of this, he said, guarantees the response to any future attack will be much different than in Iraq&#8217;s 1990 invasion, when panicked Kuwaitis fled in long caravans across the desert to neighboring Saudi Arabia.

On Tuesday, the civil defense force held a bomb attack drill at the Kuwait Chamber of Commerce and Industry, a circular, 15-story building downtown.

In the middle of the workday, police set off a series of loud explosions followed by canisters of yellow smoke. The scenario simulated an aerial bomb striking the roof.

Workers fled down long flights of stairs and clustered on the sidewalk around a sign reading &#8220;Emergency Assembly Point&#8221; in Arabic and English.

Firefighters, police and civil defense personnel rushed to the scene, scouring the building and neighboring streets for &#8220;victims.&#8221;

The victims, decorated with realistic wounds and lying in pools of fake blood, were rushed off in ambulances.

But many young Kuwaitis seem largely unaffected about the possibility of such an attack.