Kuwait's a center of sports as ESPN comes to Camp Arifjan 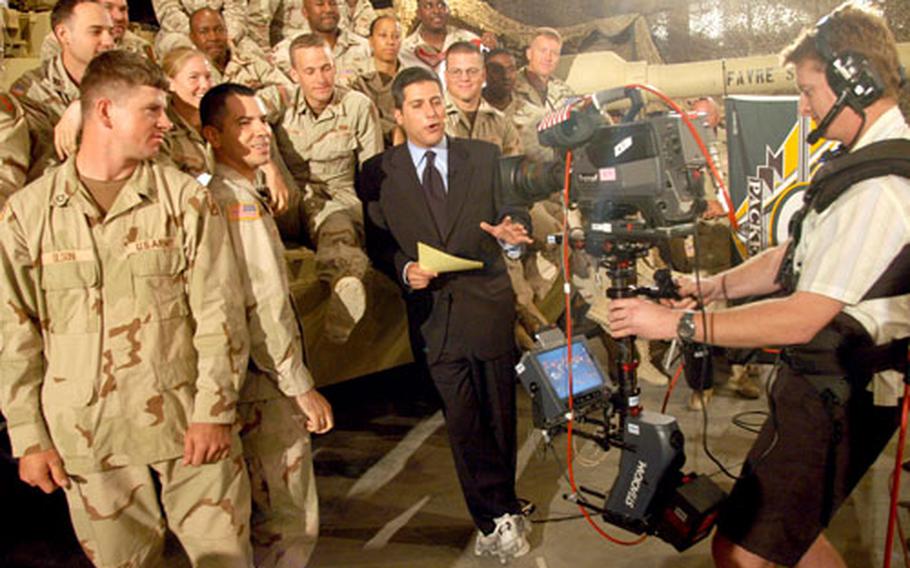 ESPN SportsCenter anchor Steve Levy does a spot on the redeployment of part of the 1st Infantry Division back to their Ft. Riley, Kansas, home. (Jason Chudy / S&S)

ESPN SportsCenter anchor Steve Levy does a spot on the redeployment of part of the 1st Infantry Division back to their Ft. Riley, Kansas, home. (Jason Chudy / S&S) 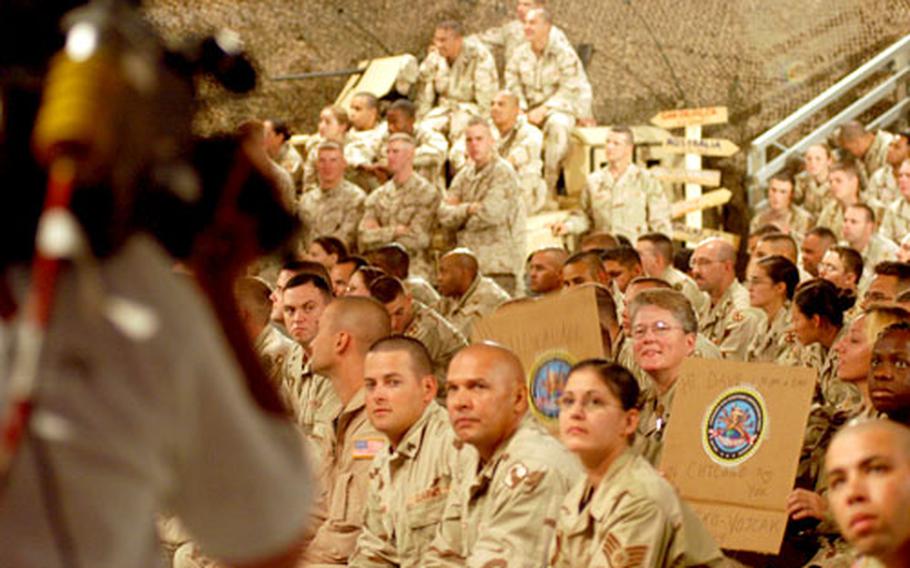 An ESPN cameraman films the troops during the show. (Jason Chudy / S&S)

More than 500 members of the military crowded a Camp Arifjan warehouse for ESPN&#8217;s first live &#8220;SportsCenter&#8221; broadcast from Kuwait, cheering their favorite or jeering their least-favorite teams during the hourlong sports news program Tuesday.

Opening the show was Army Staff Sgt. Teddy Barlow, who held roll call for the assembled units before turning the formation over to &#8220;SportsCenter&#8221; anchors Steve Levy and Kenny Mayne.

Levy and Mayne covered the weekend&#8217;s sporting events in their casual, rapid-fire manner, while seated in front of the packed house of desert camouflage-clad soldiers, sailors, airmen and Marines.

During commercial breaks, anchors and audience traded barbs and jokes.

It&#8217;s also something that the gathered crowd will remember.

During the broadcast, troops held up signs and flags to a handful of cameras in the audience. Petty Officer 3rd Class Michael Gawlick held up a sign for his daughter, Nicole, who turned 11 on Tuesday.

Late in the show, nine soldiers and one airman took to the stage to introduce the top 10 plays of the day, which included everything from spectacular baseball catches to surfing dogs, which came in at No. 3.

Buenrostro and fellow battery members Sgt. Thomas Reust and Spc. Jared Kiser all agreed that this was a highlight of their return trip home after a year in Iraq.

Sgt. Ann Dooley of the 80th Ordnance Battalion sat on the front row of Army cots that served as audience seating. She said she isn&#8217;t a sports fan, but wanted to attend anyway.

&#8220;SportsCenter&#8221; will do live broadcasts from Kuwait daily through Saturday.