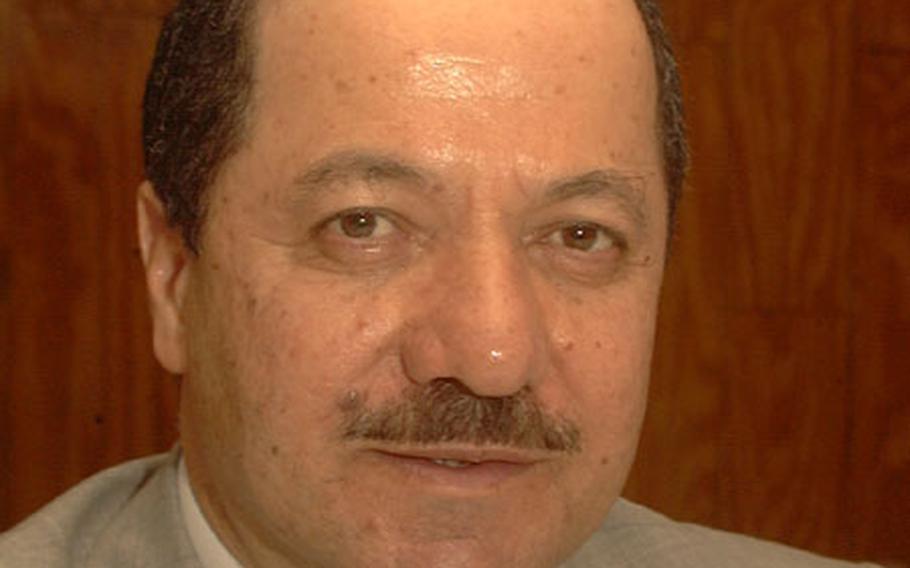 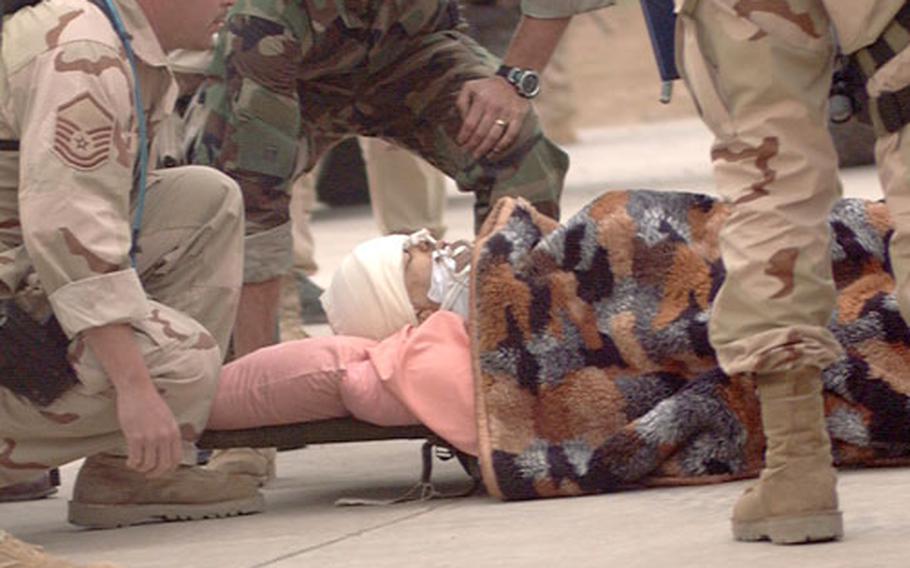 During Operation Iraqi Freedom, combat operations claimed the lives of 30 peshmerga soldiers fighting for the Kurdistan Democratic Party. Another 121 were injured, including a son and brother of Massoud Barzani, president of the KDP. On April 6, a friendly fire incident with U.S. forces killed 18 KDP soldiers. Barzani&#39;s younger brother, Wajeh, (pictured above) suffered severe head injuries on that day, but is now recovering from his wounds. (Kevin Dougherty / S&S)

Massoud Barzani, president of the Kurdistan Democratic Party, recently left the relative safety of northern Iraq for the chaotic and confused city of Baghdad.

Though &#8220;the War for Freedom,&#8221; as one Iraqi calls it, has crippled the city, people seem relieved by the demise of Saddam Hussein.

&#8220;Even if we are without air, without water, without electricity, without security, we are much better off than in his time,&#8221; proclaimed one banner in the Old City.

Later this month or next, some of Iraq&#8217;s leading citizens expect to convene a transitional national assembly for the purpose of forming an interim government. One of the principal participants will be the 56-year-old Barzani.

He was born in northern Iran, where his father, Mullah Mustafa Barzani, was living in exile. Barzani assumed the KDP mantle when his father passed away in a Washington-area hospital in 1979.

Twelve years later, the Kurds suffered mightily during a brutal onslaught by Saddam&#8217;s army following the 1991 Gulf War. That tragedy led to the formation of a &#8220;safe haven&#8221; in northern Iraq, which allowed the Kurds to rebuild and prosper and enjoy a degree of autonomy.

Today, many people, including a number of Arabs, view Barzani as a man of promise. Considering the security detail surrounding him, it appears some elements have other ideas.

Stars and Stripes reporter Kevin Dougherty sat down with Barzani a few days ago for an exclusive interview as he prepared for the coming assembly. A translator was present. In the interest of clarity, some sections were shortened and slightly adjusted to make it more readable.

Q:What would you like to say to U.S. troops, not necessarily to the colonels and generals, but to the sergeants and all the young soldiers in Iraq?

A: I would, first of all, like to thank them, personally, for risking their lives to come over here and liberate us from the dictatorship. And I also wish them all the very best, and safety and a quick return to their loved ones back home.

And it&#8217;s also a pleasure to indicate that our peshmerga forces, known as the pesh by the military of the north, fought side-by-side with your troops in the northern front and gave sacrifices and life and worked very, very hard and tirelessly to help and to be a main player in liberating Iraq. We were not bystanders in any way like some other political [groups]. We were in action and strong allies of the coalition.

A: As long as it is necessary.

Q:Do you support long-term basing of U.S. forces in Iraq?

A: Of course the relationship with America and the American military is a strategic one. I cannot specify any further details. &#8230; I would say that we would like you around for as long as is necessary. And most importantly, the nature of the relationship has to be friendly.

Q:What is the United States doing right? What is it doing wrong?

A: The most important, obviously, was the collapse of the regime, to bring the regime down. But, of course, there is a danger that this has led to a vacuum of security and stability that exist at the moment. This has soured this great and sweet success that we have had.

If I was to have a negative assessment: In Kurdistan, where we suffered for many years from the &#8220;Arabization&#8221; program, where the former regime forcibly removed Kurdish families and settled Arabs in their place, those same people are now being protected by the U.S. military.

They are preventing us from reversing the &#8220;Arabization&#8221; that was a genocide as far as I&#8217;m concern. Instead of reversing that, they are actually protecting the Arabs and preventing many IDPs [internally displaced persons] from returning to their homes.

Q:Army Col. Bill Mayville, the commander of the 173rd Airborne Brigade in Kirkuk, and other U.S. leaders have asked for patience on this issue, since many records have been destroyed.

A: This may be true, so far as Kirkuk city is concerned, but there were many villages in the vicinity that were 100 percent Kurdish villages and they were forcibly cleaned out.

When the regime collapsed, Arabs who lived in those villages, by choice, decided to get up and go home, to pack and leave. And the Kurdish families returned to their locations.

What we have now is the American forces forcibly coming back and throwing these Kurds back out and reintroducing those Arabs into those same villages.

If this continues, they will lose the friendship of the Kurdish people.

Nothing has been so sensitive to the Kurdish people as the Arabization program.

A: Our endeavor is to hold it at the end of the month, but we cannot guarantee that. It may fall into the first week of June.

Q:And what is the goal?

A: I really couldn&#8217;t give you a specific time frame. Based on the problems we face and the issues, I doubt we can achieve [everything] after 12 months.

Q:Can you go beyond that? If you were in charge, as president, where would you like to take Iraq?

A: One thing is clear. There is no way we can go back to the former system of government. Iraq must never be ruled by a strongman, as we had in Saddam and even prior to that. There has to be a federal system where the people of Iraq, by agreement, decide to live together and coexist.

Our federal vision is based on Iraqi Kurdistan being one part of that federal system, and the rest of Iraq, Arabs, could be another part or could be two parts. That is their choice. Iraq has to be a nation of two main people: the Arabs and the Kurds, whose rights have to be preserved under the law, under the constitution.

In addition to that, the rights of other nationalities &#8212; the Turkmen, Assyrians and others &#8212; have to be clearly safeguarded under the law in whatever region they live. Only that way we can guarantee an Iraq that is safe and secure.

Therefore, we genuinely believe that without federalism Iraq will not be at peace with itself.

A: It is true that in these momentous times you cannot help but think what might have been. One thing is clear, our struggle, certainly the Kurdish people&#8217;s struggle in Iraq and our achievements today, are owed to the basis that he started and he led in a very brave struggle that was clean in its conduct. One of our major successes was [continuing] his teaching of not to indulge in terrorism.

We are proud to say that, based on his directions, we never even came to that level, and today we are bearing the fruits of keeping a clean sheet so far as our struggle is concerned.

Another thing that we learned from him and tried to keep in mind was that you should never move your struggle to be one between two nations &#8212; Arabs and Kurds.

Our struggle as a people was always against the central government and not the Arabs. And therefore we&#8217;ve noticed that over these last few days of our presence here we&#8217;ve had scores of delegations from various Arab tribes, and so on, who are making that same point: that the late Barzani had this very honest and honorable stand. That this wasn&#8217;t an issue between Arabs and Kurds.

Q:What was you father like, politics aside? What were his interests? Did he like sports, the mountains? What are your childhood memories of him?

A: He liked mountain walks. That was his favorite, favorite pastime. Hunting in the mountains was one of his favorite pastimes. &#8230; But hunting was really in his youth days, but not when he grew older. I walked with him a great deal, but never hunted.

Q:When is your birthday?

I was born in Mahabad, [Iran], and this was the capital of the first and only Kurdish republic.

Q:Will Kurdistan be an engine for reform, not just in Iraq, but also in the region?