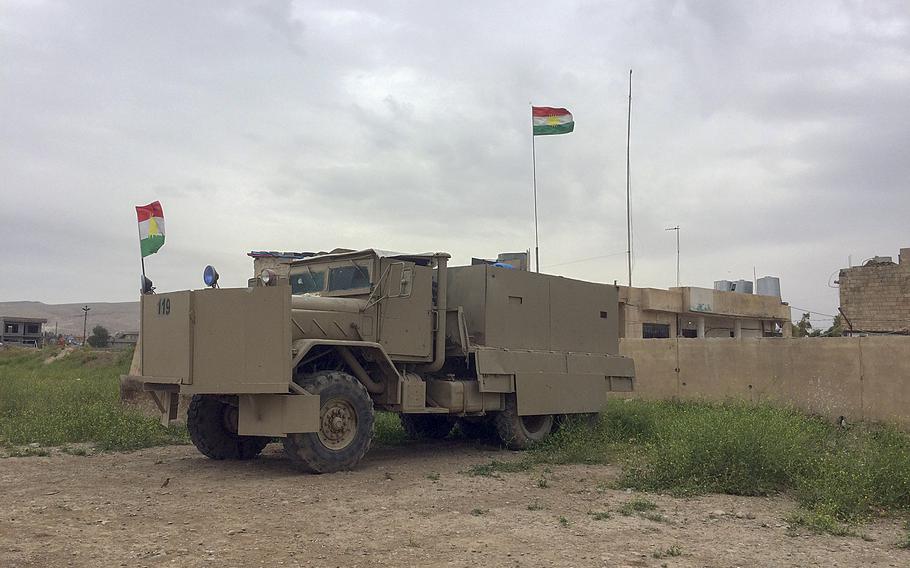 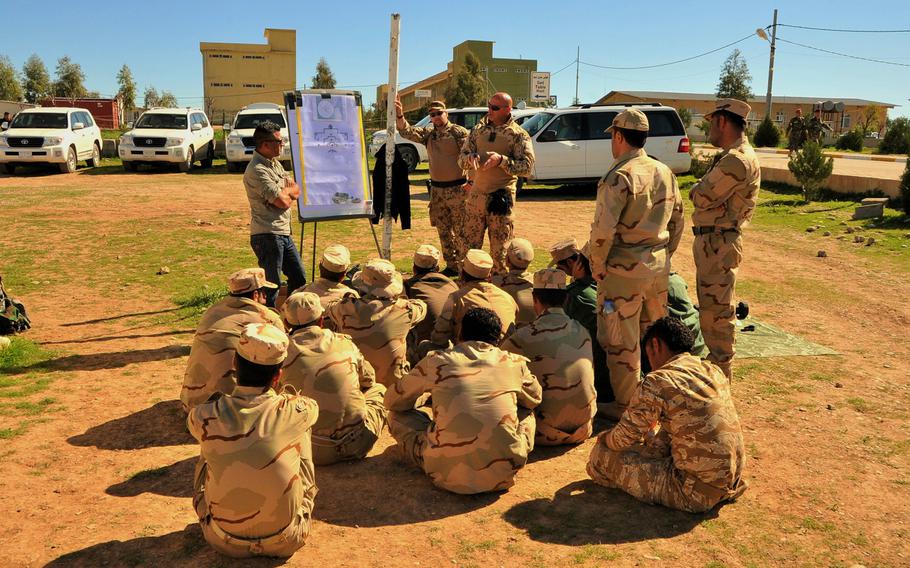 Members of the Peshmerga Modern Brigade Course are given instruction on sighting and tracking using the Panzerfaust anti-tank weapon by a member of the anti-Islamic State coalition in the vicinity of Irbil, Iraq in March 2016. The 10-week Modern Brigade Course provides peshmerga forces instruction on weapons, medical, counter IED, and chemical and biological training. (CJFLCC-I Public Affairs) Members of the Peshmerga Modern Brigade Course are given instruction on Basic Rifle Marksmanship by members of the international coalition against the Islamic State group in the vicinity of Irbil, in northern Iraq, in March 2016. The Basic Rifle Marksmanship course provides instructions on target identification, sighting and zeroing in of weapons, qualification and weapons maintenance. (CJFLCC-I Public Affairs) 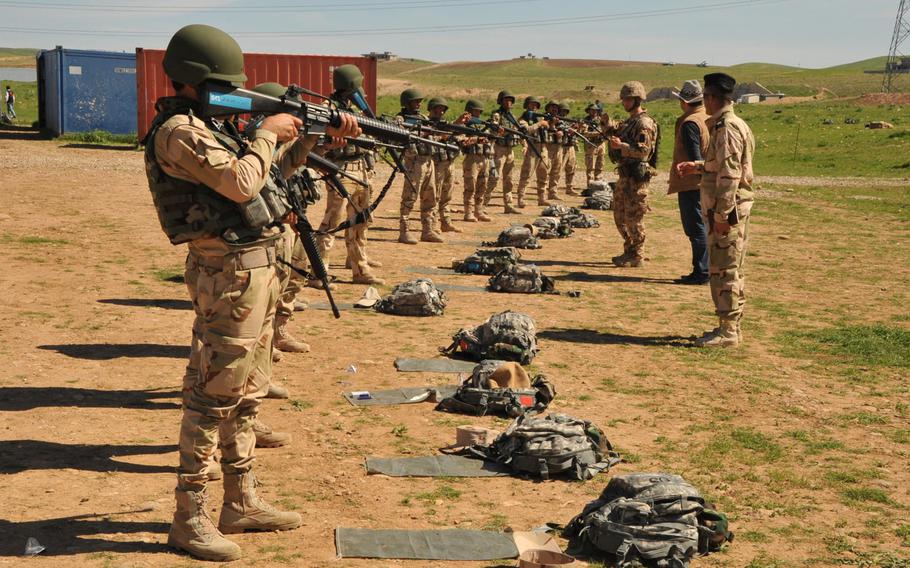 IRBIL, Iraq — America and its coalition partners have begun arming the Kurdish peshmerga with heavy weapons such as armored personnel carriers, mortars and anti-tank weaponry to bolster their capability against the Islamic State.

Brig. Gen. John E. Novalis II, deputy commander of the 101st Airborne Division, said this week that the U.S.-led coalition is providing the peshmerga with a significant amount of new gear as it prepares to take part in a planned assault to recapture the city of Mosul from the Islamic State.

“We have decided to give them about two U.S. Army brigades-worth of equipment – heavier stuff,” he said by telephone from Baghdad, where he is overseeing coalition training of Iraqi security forces.

The new gear will likely be welcomed by the Kurds, who have long complained that their weapons are inferior to the U.S.-made hardware seized by the Islamic State when it drove Iraqi forces out of Mosul in 2014.

Iraqi officials had balked at the coalition directly arming the Kurds for fear the weapons could be used later to press longstanding Kurdish aspirations for an independent state. The Kurds, meanwhile, had complained that the central government was holding up delivery of coalition-supplied equipment.

“One hundred percent of the arms and equipment that we provide goes through the central government of Iraq,” Warren said.

There may be times when, after coordination with Baghdad, weapons are delivered to the Kurdish Regional Government, Warren said. “The central government decides where every piece of equipment goes,” he said.

The brigade sets are being provided directly to the Ministry of Peshmerga, a coalition spokesman in Irbil said Wednesday. The Iraqi government in Baghdad has been notified of the process and approves. No Iraqi government officials could immediately be reached for comment.

The Kurdish fighters, known as the peshmerga, are considered the most effective force in Iraq that’s facing the Islamic State.

Despite their differences with Baghdad, the peshmerga will likely be involved in Iraq’s plan to retake Mosul, Novalis said. “If they are doing operations across the FLOT (the forward line of troops) they will probably need heavy equipment,” he said.

Information provided by U.S. military officials in Irbil, capital of the autonomous Kurdish region of Kurdistan, shows that the new equipment includes more than 150 vehicles, including 40 Mine Resistant Ambush Protected (MRAP) armored personnel carriers, 15 of which are equipped with mine-rollers.

The equipment is being funded out of $2.6 billion of assistance that the U.S. and other nations have provided to Iraq over the past two years.

The brigade sets have been arriving for several months, he said.

On Monday some of the MRAPs rolled into Irbil on the back of trucks.

The process of equipping the peshmerga is made more complicated by the need to pull units off the front lines, where they are fighting the Islamic State, so that they can train on the new gear, Mulhern said.

British Army Maj. Ben Salt is planning the effort to train and equip the Kurds from his office in the old passenger terminal at Irbil International Airport, now surrounded by sand-colored tents, Special Forces Osprey aircraft and Iraqi helicopters.

International trainers began a “Modern Brigade Course” last month to get the Kurds up to speed on their new gear, he said.

“All the soldiers have experience fighting with Daesh already,” Salt said, referring to the Islamic State by its Arabic acronym.

The peshmerga are being trained to conduct mounted and night operations, casualty collection, convoys and force protection. They also receive specialized training based on their jobs. Snipers, for example, learn camouflage, land navigation and marksmanship. Mortar crews learn to hit targets beyond the line of sight, he said.

The fighters are learning to use .50 caliber machineguns and Mark-19 grenade launchers that can be mounted on their new armored vehicles and they are being trained to fire Milan and rocket-propelled anti-tank weapons, he said.

Meanwhile, the trainers are teaching peshmerga commanders military decision-making that will allow them to operate at battalion and company level, Salt said.

Novalis, who oversees five “Building Partner Capacity” training sites in Iraq, said the training program for Iraqi and Kurdish forces is having a clear impact.

“So far it’s pretty darn effective,” he said. “We see it on a day to day basis on the FLOT in Kurdistan or in the Euphrates River valley or the Tigris River valley.”

U.S. troops are teaching the Iraqis about U.S. equipment such as the Abrams M1A1 tank but most of the training is being done by troops from other nations, Novalis said.

The Kurds and other Iraqis have been through a lot of political turmoil, he said. “They work together because they have a common enemy, which is Daesh,”

The new gear is only being fielded where it is needed, Novalis said. “We don’t just hand them 400 M-16s and go. We are filling capability gaps. They have quite a bit of NATO and non-NATO equipment,” he said.