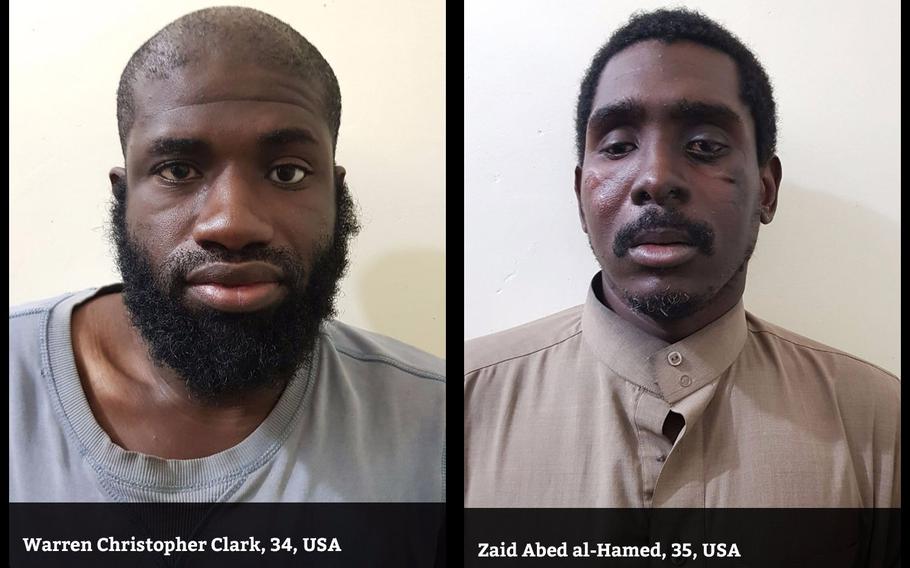 Two Americans fighting for the Islamic State in Syria have been captured by Kurdish forces. Warren Christopher Clark, 34, and Zaid Abed al-Hamed, 35, were among the roughly 300 Americans who left or tried to leave the U.S. to fight in Syria. (Syrian Democratic Forces)

Kurdish-led forces battling Islamic State militants in Syria say they captured five foreign fighters, including an American who once sought to become an English teacher in the jihadi group’s Iraqi capital.

The American, a Texan named Warren Christopher Clark, 34, was one of two reputed U.S. citizens captured in a counterterrorism raid near the Iraqi border, where U.S.-backed forces are continuing to battle a pocket of the terrorists, the Syrian Democratic Forces said in a release on Sunday.

The group of jihadis had been preparing to attack masses of civilians fleeing the area, the SDF said. Also captured were two Pakistani fighters and an Irish man.

Officials with Operation Inherent Resolve, the U.S.-led coalition against ISIS militants in Iraq and Syria, were aware of the SDF release, but could not confirm the information it contained, a spokesman said via email.

“The incident is under investigation,” said Army Col. Scott Rawlinson, the spokesman.

While nearly all of the territory ISIS once claimed Syria has been liberated, and President Donald Trump has called for a withdrawal of Americans from the country in the coming months, the U.S. and its allies continue to battle a remaining pocket of fighters along the Middle Euphrates River Valley.

In Iraq, where the government declared victory over the group in late 2017, ISIS fighters have launched insurgent attacks, ambushes and kidnappings, and some officials have warned of a possible resurgence of the group, which has long drawn hundreds of foreign fighters to its ranks.

Clark, who has one glass eye, had sought a nonmilitary role with the group, according to researchers with George Washington University’s Program on Extremism who, in a February report, named him as one of at least 64 Americans from 16 states who had traveled to Iraq and Syria since 2011 to join jihadi groups, mainly ISIS.

Under the alias Abu Muhammad al-Ameriki, Clark had submitted an application seeking to join ISIS as an English teacher in Mosul, which had served as the Iraqi capital of ISIS’s physical caliphate from summer 2014 until it was liberated by U.S.-backed and trained Iraqi forces in summer 2017.

Using the application’s resume and sources in Texas, researchers identified Clark as a University of Houston graduate who had converted to Islam in 2004 and was radicalized after viewing jihadist videos online, NBC News reported earlier this year. He had worked as a substitute teacher in Texas before traveling to Saudi Arabia to teach English for two years and then going to Turkey.

The second American the SDF captured was identified as Zaid Abed al-Hamed. The 35-year-old, who reportedly went by the alias Abu Zaid al-Ameriki, does not appear to have been one of the fighters — mainly U.S. citizens and legal residents — identified in the Program on Extremism report.

As with Clark, Al-Hamed’s Arabic nom de guerre, or “kunya,” contains a term traditionally used to identify Americans, but several fighters dubbed with the same term and appearing in jihadi propaganda materials since 2011 were not mentioned in the February report because their true names or backgrounds could not be verified, wrote Alexander Meleagrou-Hitchens, Seamus Hughes and Bennett Clifford, the report’s authors.

Some 300 Americans tried to leave or did leave the U.S. to fight in Iraq or Syria since the start of the Syrian civil war in 2011, the report said, citing the FBI. Of the 64 who were named, the whereabouts or status of 28 were publicly unknown, more than 20 were believed to have died overseas, 12 were apprehended and three had returned to the U.S. without facing charges.

It’s not yet clear what will happen to the American prisoners, but it isn’t the first time the SDF has caught U.S. citizens on the battlefield.

In late 2017, they captured a fighter with dual Saudi-U.S. citizenship whom they accused of fighting for ISIS. After holding the unnamed man as an “enemy combatant” on a military base in Iraq for months, the U.S. planned to release him first to Saudi Arabia, then back into Syria under “safe conditions” in the area where he was captured.

Describing the planned release in Syria, a Pentagon official said in a court filing that such actions are “a traditional military practice” used in U.S. Central Command, but the American Civil Liberties Union, which took on the man’s case, called it a “death warrant.”

In November, a court filing shows that the Defense Department released him in Bahrain following negotiations with the ACLU.