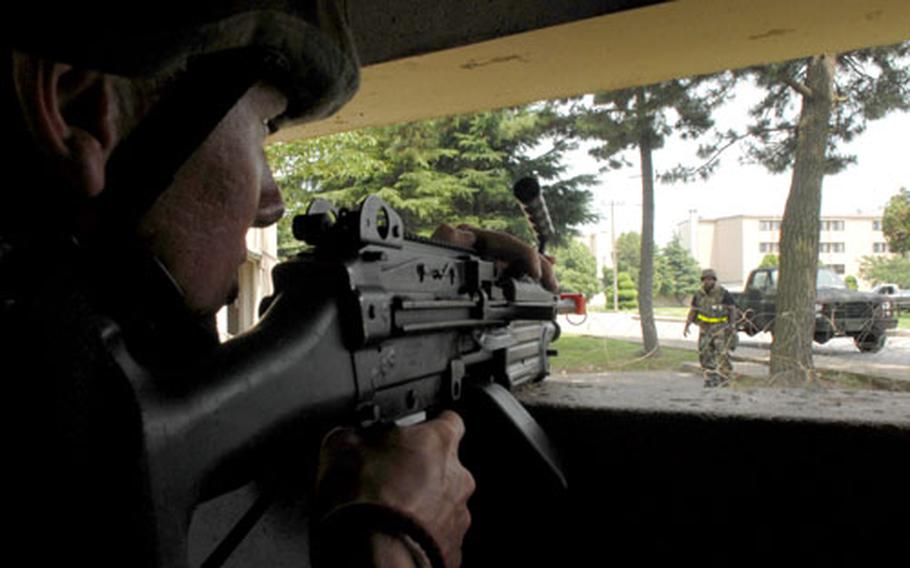 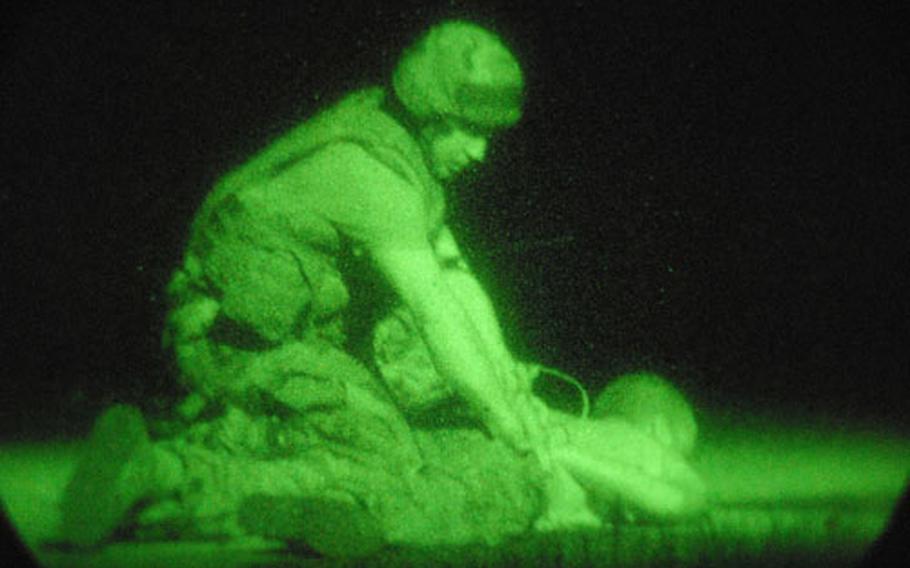 Senior Airman Robert Spears, a member of the 8th Security Forces Squadron, captures an "insurgent" at Kunsan Air Base on Tuesday during a peninsula-wide exercise. (Courtesy of U.S. Air Force)

SEOUL &#8212; A peninsula-wide weeklong training exercise was scheduled to end Friday for airmen in South Korea.

Because most of Kunsan&#8217;s leadership arrives in the late spring and summer for one-year tours, this was the first exercise for most of the F-16 base&#8217;s new class of commanders.

Exercises take place throughout the Air Force, but they are especially realistic at Kunsan, believed to be the only base that shuts down all nonessential buildings, including the commissary, during an exercise.

The base launches an average of 100 sorties daily during an exercise, compared with 40 sorties on an average non-exercise day. U.S. and South Korean pilots flew some mock combat missions together during the week.

The exercise began on Monday. The most difficult scenarios, Bearden said, were when the base underwent a mock chemical attack and airmen had to continue launching fighter jets while wearing bulky protective gear.

"That tends to slow us down," he said.

As of Wednesday afternoon, one airman had been treated for possible heat stress. The airman was given water and allowed to rest but wasn&#8217;t given an IV because his symptoms were mild, Bearden said.

Airmen are trained in advance on how to operate in the heavy chemical gear, supervisors are trained to recognize signs of heat illness, and airmen are encouraged to drink extra water.

Because the exercise involves so many scenarios and so many players &#8212; all Osan and Kunsan personnel, and some South Korean airmen &#8212; giving leaders an accurate picture of what&#8217;s going on can be difficult.

Planners begin designing the exercise months in advance, during a series of conferences that include leaders from across the peninsula, he said. Each exercise is tailored to what the commanders want to learn, and later exercises build on what commanders learn from the first exercise of their tours and want to improve.

The exercise, called a PENORE, for peninsula operational readiness exercise, is held several times a year.