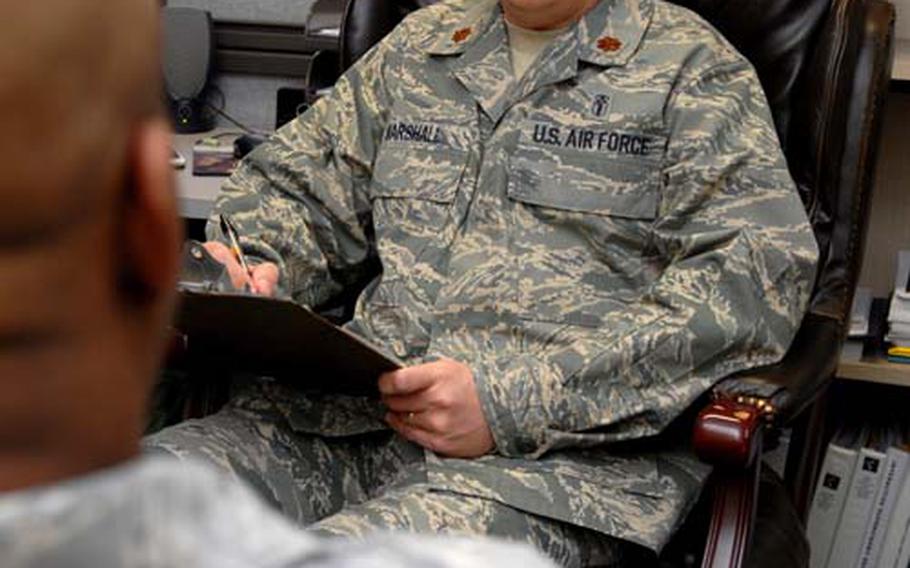 At Kunsan Air Base in South Korea last month, Maj. Nicholas Marshall, right, commander of the 8th Medical Squadron’s clinical flight, talks with an airman at the base mental health clinic. Kunsan officials have begun monthly seminars to help servicemembers who may have post-traumatic stress disorder. (Angela Ruiz/Courtesy of the U.S. Air Force)

PYEONGTAEK, South Korea &#8212; It was just supposed to be a quick lunch among colleagues. But it led to something much bigger &#8212; a program to help airmen cope with combat-related stress.

Kunsan Air Base&#8217;s mental health officer, the base chaplain and a counselor from the Airman and Family Readiness Center were lunching at the Korean Garden restaurant a few months ago when talk turned to post-traumatic stress disorder, or PTSD.

They decided to hold monthly seminars to help members of the base community recognize PTSD and get treatment.

PTSD has been getting lots of attention from the U.S. military and from news media. And it&#8217;s been in focus at Kunsan, where a significant number of the 8th Fighter Wing&#8217;s 2,600 or so airmen have served in Iraq or Afghanistan..

Base officials say fewer than 1 percent of the wing&#8217;s airmen have shown any signs of PTSD.

But "due to the stigma of going to [the mental health clinic], some members who have symptoms may not have come forward," said Air Force Maj. Nicholas Marshall, commander of the 8th Medical Squadron&#8217;s clinical flight, one of the three lunch companions who organized the seminars.

Often, it&#8217;s people who&#8217;ve been exposed to direct combat who suffer from PTSD. But it can happen to anyone in a war zone.

"People that might be working in a mess hall," Marshall said. "People that generally wouldn&#8217;t go outside the wire can be quite impacted by post-traumatic stress.

"That oftentimes is due to mortar attacks, rocket attacks. It doesn&#8217;t take many of those for people within the base to begin to have some post-traumatic stress happening," he said.

The seminars are held over lunch at the base&#8217;s Loring Club and last about an hour. The next one will be March 26.

In addition to Marshall, a chaplain and a military life consultant from the base Airman and Family Readiness Center speak to the audience.

He said people who come to the mental health clinic to see if they might be experiencing PTSD symptoms can expect confidentiality. "So the command wouldn&#8217;t be notified unless the symptoms were so severe that it had some impact on their ability to perform their mission," he said.

An initial mental health assessment takes about 90 minutes, he said.

Patients are then told about their treatment options. Those often include coming back for three- to 12-hour sessions.

"Most of the folks that we see probably won&#8217;t get a full PTSD diagnosis," said Marshall.

Symptoms of stressAvoidance behaviorsOne example Marshall says he hears frequently is servicemembers not wanting to go into places with large groups of people, such as shopping malls and supermarkets.

Such places may seem as potentially dangerous as "being in an Iraqi village or town where the individual has to constantly scan the environment for potential danger," Marshall said.

Ongoing hypervigilanceHypervigilance occurs when the servicemember back from downrange maintains the heightened level of alertness needed in a war zone.

"Scanning the crowd, scanning the road, looking for anything that could be a potential danger," Marshall said. "The fight-or-flight response is happening, putting a lot of hormones in their body to make them breathe faster, their heart beat faster, when there&#8217;s no real reason for them to be in that mode."

Marshall has heard many stories of servicemembers who sit where they can see the door in a restaurant, essentially putting themselves in positions where "they feel they can have some safety or protection."

In the States, Marshall talked with troops who would drive as erratically as they would have to in Iraq to avoid roadside bombs.

Re-experienced memoriesNightmares and vivid daydreams cause the feeling that the servicemember is once again in a dangerous war zone situation.

Emotional numbingThis refers to "a feeling of detachment or estrangement from others," Marshall said. It typically begins in the war zone as a defense against the pain of seeing comrades killed or wounded.

That could be beneficial downrange to keep from feeling the pain of losing friends, he said. "However, when you go home, if you feel emotionally numb to your family or your co-workers, then it becomes a problem."

Returning servicemembers also may feel unable to fit in easily with people who haven&#8217;t experienced the war zone.

"Especially if they&#8217;ve been in a combat unit or seen a lot of traumatic events, returning can be a feeling of being a fish out of water, " Marshall said.