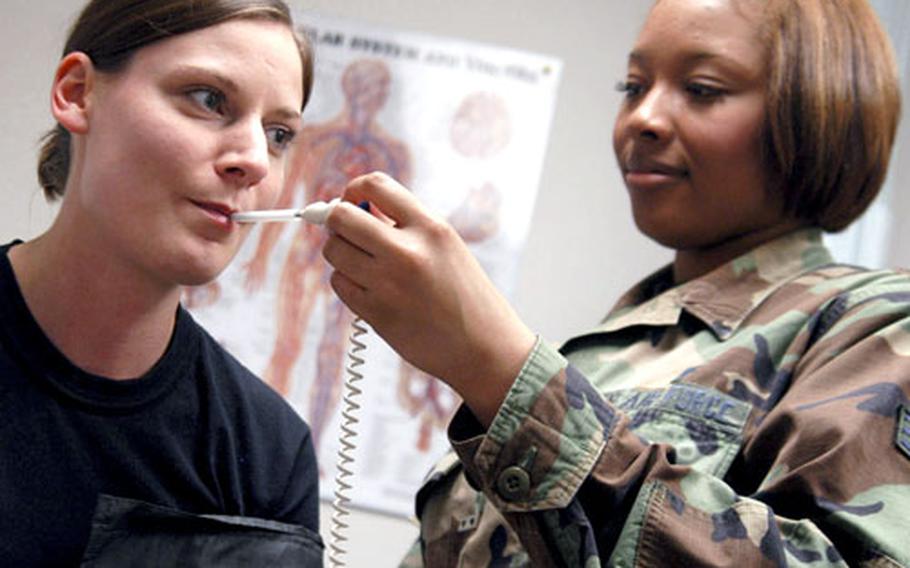 PYEONGTAEK, South Korea &#8212; Airmen at Kunsan Air Base who wake up with flu symptoms or other aches and pains now can see a doctor the same morning instead of waiting days &#8212; sometimes weeks &#8212; for a clinic appointment.

Kunsan&#8217;s 8th Medical Group clinic has started a daily sick call that allows airmen to show up and be seen for whatever ails them &#8212; a sprained ankle, nausea, or other acute but nonemergency ailments.

Airman suffering such things as chest pains, difficulty breathing or other symptoms of a potentially serious condition always could be seen immediately by clinic staff. But until the new sick call began, calling and scheduling a clinic appointment was the only way to be seen for a nonemergency ailment.

Given the clinic&#8217;s crowded appointment calendar, that could mean waiting days or a few weeks to get in.

Nurses would consume much time on the phone trying to gauge whether a caller&#8217;s symptoms were routine enough to be handled with an eventual clinic appointment or urgent enough to be seen the same day on a &#8220;walk-in&#8221; basis, said Maj. Graham Wallace, 8th Medical Group&#8217;s medical staff chief.

The new procedure is especially helpful at Kunsan, an austere, remote base whose population consists mainly of active-duty servicemembers working at a vigorous training tempo, he said. Kunsan also lacks an emergency room.

The new system and its set hours are saving doctors and nurses a lot of time previously spent tending to walk-in cases that could show up at scattered times during the day, said Wallace.

Those walk-ins still occur but are far fewer now that airmen know a morning sick call is available to them.

The clinic is averaging about 10 sick-call patients daily, Wallace said.