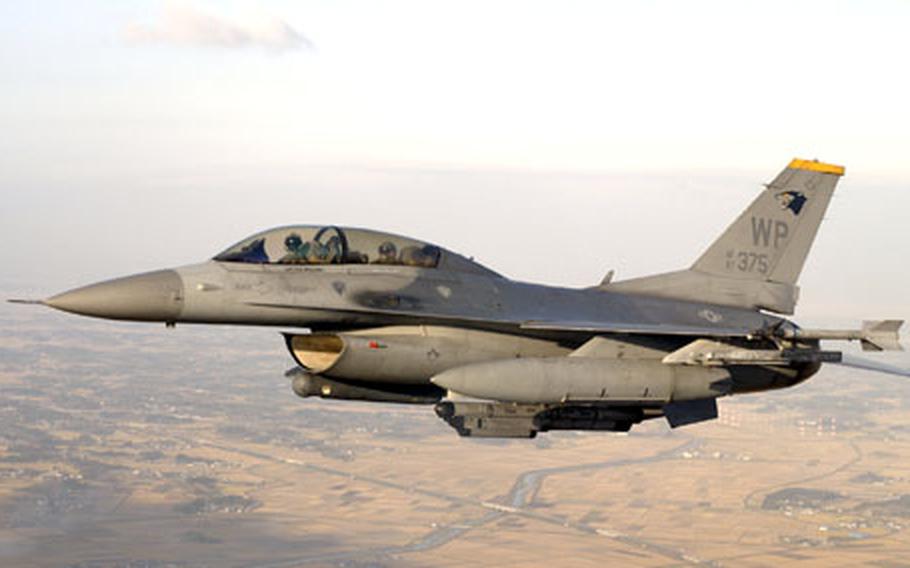 An F-16D of the 80th Fighter Squadron at Kunsan Air Base streaks over rice fields in South Korea in this undated Air Force file photo. The squadron is part of Kunsan's 8th Fighter Wing. (Photo courtesy of U.S. Air Force)

The 8th Fighter Wing at Kunsan Air Base has won a major Air Force-level award for a series of &#8220;outstanding&#8221; accomplishments.

The wing, also known as the Wolf Pack, has received the Air Force&#8217;s 2005 Outstanding Unit Award for its performance from October 2003 through September 2005.

It is one of six units within Pacific Air Forces to win one of the 2005 awards.

One was the overall &#8220;excellent&#8221; rating it received during the 2005 PACAF Operational Readiness Inspection, the best rating the Wolf Pack received in 10 years.

Another was the support of deployments to Kunsan of F-117A Nighthawk fighters and personnel from Holloman Air Force Base, N.M. The Wolf Pack flies the F-16 fighter.

Other factors that helped the Wolf Pack win the award were:

The Air Force-level AFOUA was established in 1954 and is awarded by the Secretary of the Air Force to numbered units that have distinguished themselves through exceptionally meritorious service or outstanding achievement that clearly sets the unit above and apart from similar units.

The award will be presented to the Wolf Pack in a ceremony to be scheduled for later this year.

The wing&#8217;s latest award comes while it is a finalist for a top-level Defense Department 2006 installation excellence award. Also in the running for that award, called the Commander-in-Chief&#8217;s Installation Excellence Award, are Ramstein Air Base in Germany and Cannon Air Force Base, N.M.