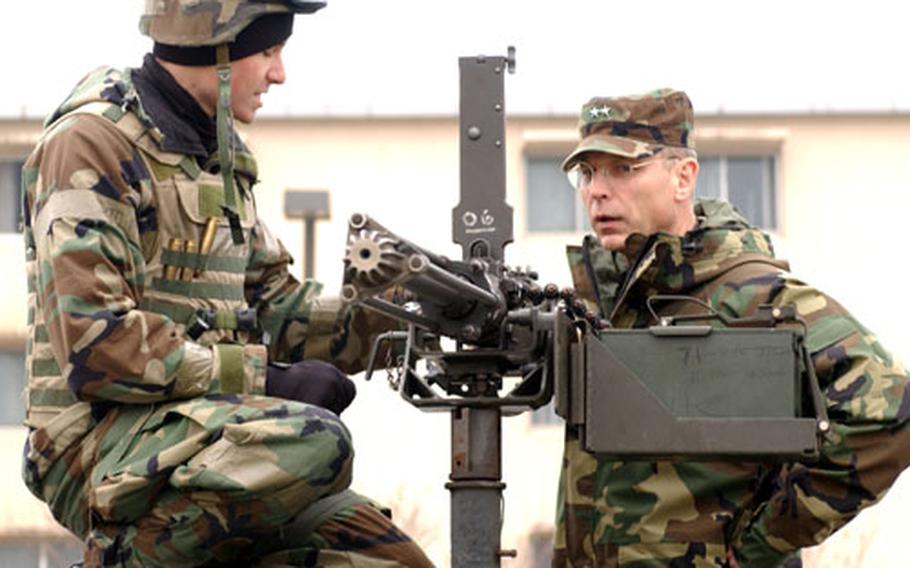 At Kunsan Air Base in South Korea, Air Force Maj. Gen. Mark Anderson, right, gets insight into how Kunsan airmen would defend the base. (Courtesy of U.S. Air Force)

At Kunsan Air Base in South Korea, Air Force Maj. Gen. Mark Anderson, right, gets insight into how Kunsan airmen would defend the base. (Courtesy of U.S. Air Force) 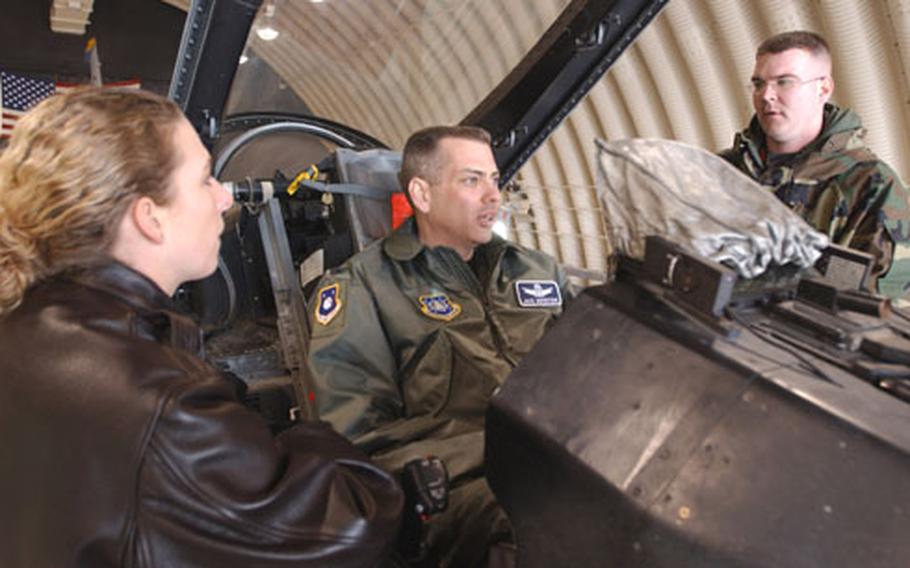 At Kunsan Air Base in South Korea earlier this week, Air Force Col. Jack Weinstein, a member of the Installation Excellence selection board, sits in the cockpit of an F-16 fighter jet of Kunsan&#39;s 8th Fighter Wing and talks with wing members. The board is evaluating Kunsan and two other Air Force installations in the running for a top-level Defense Department award for excellence. (Courtesy of U.S. Air Force)

The base, home to the 8th Fighter Wing, also known as the Wolf Pack, is one of three Air Force installations in the running for the 2006 Commander-in-Chief&#8217;s Installation Excellence Award.

Even being a finalist is considered &#8220;an honor&#8221; within the Air Force, said 1st Lt. Brooke Brander, a Wolf Pack spokeswoman.

The final winner will get an additional $500,000, bringing total winnings to $1 million, he said.

Base officials showed the team around and took them to various presentations highlighting innovations the wing has made in helping carry out its mission and in improving quality of life.

The team saw the Wolf Pack&#8217;s &#8220;Iron Viper&#8221; program, which is a class in which the wing&#8217;s weapons specialists show how they build and disassemble bombs and other munitions.

It&#8217;s open to all wing members regardless of job field who want insight into the world of Air Force munitions. But the wing&#8217;s pilots are the ones who usually attend, said Brander.

They also were briefed on how the base would defend itself against attack and were shown a program that recycles a chemical used in refrigeration systems, Brander said.

No decisions have been made yet on how to spend the $500,000 award money, Galbreath said, adding that Wolf Pack commander Col. Brian Bishop soon is to set up a &#8220;cross-functional team to best determine the way to allocate&#8221; the funds.