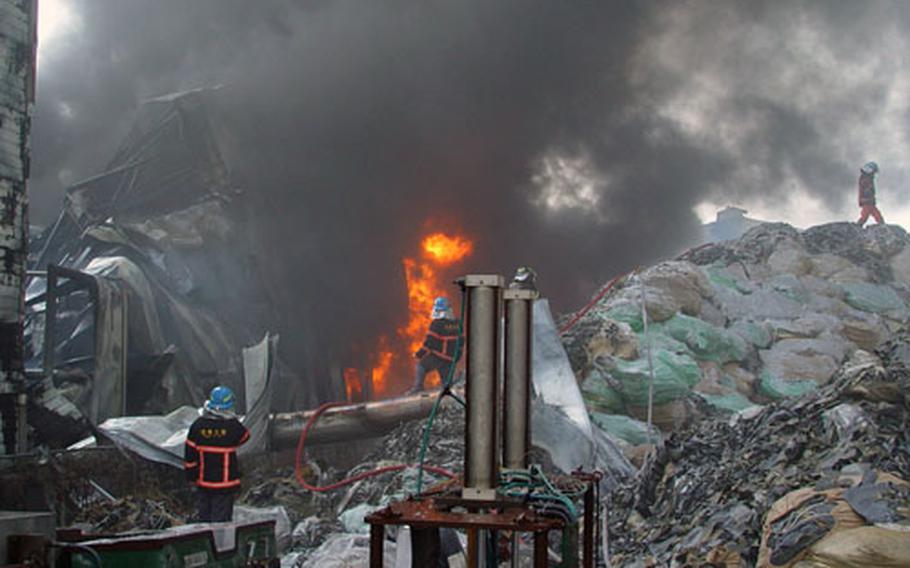 Gunsan City, South Korea, firefighters battle a warehouse blaze Monday with help from firefighters from Kunsan Air Base&#39;s 8th Fighter Wing. The two fire departments train together periodically and reinforce each other when needed. (Courtesy of the U.S. Air Force)

Gunsan City, South Korea, firefighters battle a warehouse blaze Monday with help from firefighters from Kunsan Air Base&#39;s 8th Fighter Wing. The two fire departments train together periodically and reinforce each other when needed. (Courtesy of the U.S. Air Force) 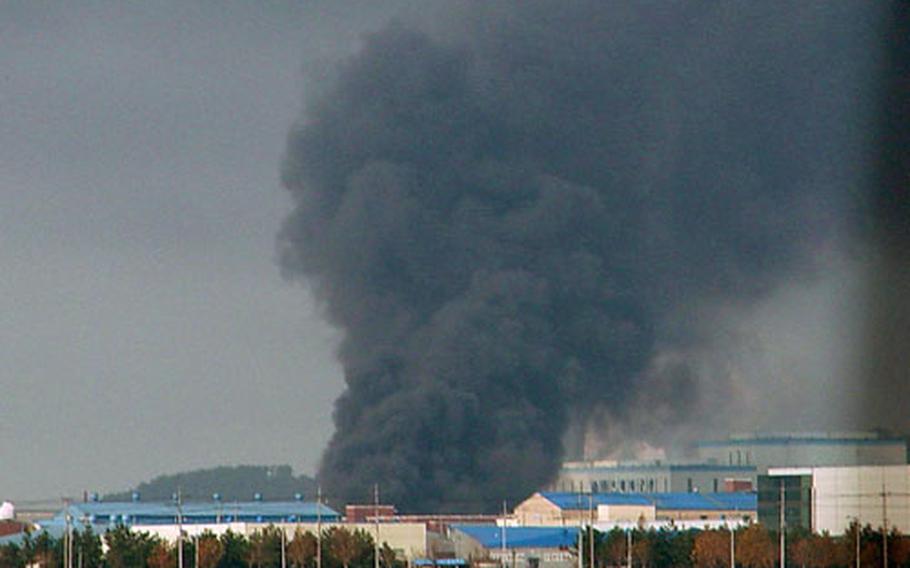 Kunsan Air Base firefighters helped put out a massive warehouse fire Monday in an industrial area of Gunsan City, about 25 miles from base.

About 180 South Korean firefighters were battling the fire when the nine Kunsan-based firefighters arrived at the warehouse, which makes reinforcing agents for concrete.

&#8220;From base here, we saw this huge plume of smoke that was coming out from that area,&#8221; said Tech. Sgt. Jason Rosenbaum, of 8th Civil Engineering Squadron Fire and Emergency Services.

They arrived at 9 a.m., about two hours after the fire started. It took firefighters another five hours to put out the blaze, which got so hot it melted steel beams &#8212; something that happens at 3,000 degrees or hotter.

&#8220;As soon as we asked for help, they came to the fire scene immediately,&#8221; said Gunsan City firefighter Kim Hyun. He said the chemicals inside the building made the fire especially dangerous.

Gunsan City firefighters had run out of chemical-fighting agents until the base firefighters arrived with reinforcements, he said.

Kim said it appeared the fire was started after the heat from a grinder ignited some nearby chemicals and that officials were still assessing the amount of damage.

Airmen practice putting out fires on cargo planes, but they rarely see a blaze as big as Monday&#8217;s.

Kunsan Air Base has a mutual aid agreement with Gunsan City and surrounding fire departments to help each other during emergencies. The departments train together about once every three months, and both responded to a large fire outside Kunsan Air Base about a month ago.

That training helps the fire departments learn how to use each other&#8217;s equipment, officials said.

When the Kunsan Air Base firefighters arrived on Monday, they had different trucks and larger hoses than the South Koreans but, Rosenbaum said, the equipment wasn&#8217;t a problem.

Neither was the language barrier, in part because Kunsan Air Base employs South Korean firefighters and because the departments have trained together.

The fire caused no injuries or deaths, he said.

Stars and Stripes reporter Hwang Hae-rym contributed to this report.