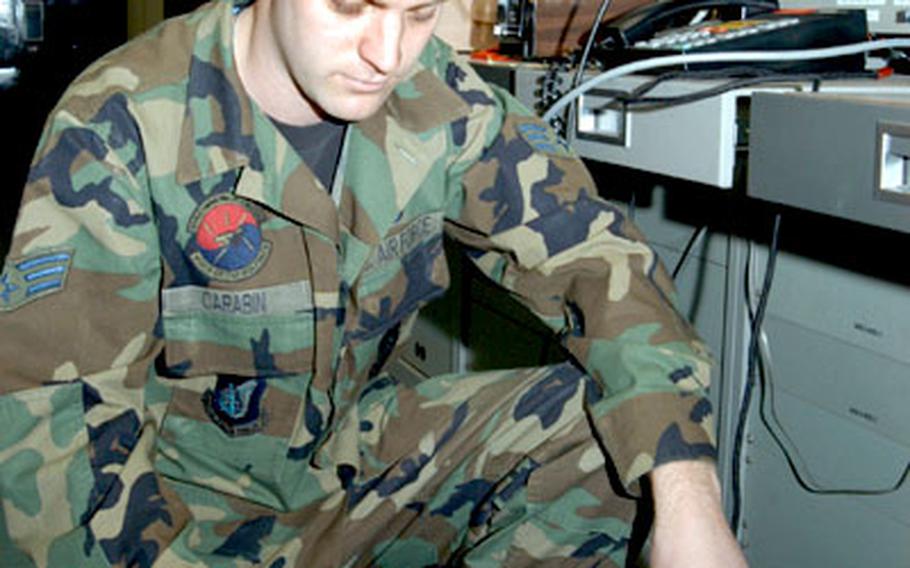 Senior Airman George Carabin, 8th Communications Squadron, runs a “bit error rate” test from Kunsan Air Base to Osan Air Base. His unit recently won an award for best of its size in the Pacific. (Robert Wollenberg / Courtesy of USAF)

The airmen who ensure Kunsan Air Base in South Korea can reach the outside world through e-mail and long-distance phone calls have been chosen as the best in the Pacific for an operation their size.

The Defense Information Systems Agency, said Capt. Scott O&#8217;Malley, gave the transmission center where they work &#8212; the Technical Control Facility &#8212; the award over seven other similar-sized transmission centers in the Pacific: four in South Korea, two in Japan and one in the Marshall Islands.

He said the three airmen and two South Korean employees comprising the Kunsan center staff were &#8220;real excited &#8230; to actually be recognized as the best in the Pacific &#8230; was outstanding.&#8221;

The staffers are responsible for keeping tabs on a variety of scopes, meters, digital screens and other electronics hardware to ensure communications flow smoothly over Kunsan&#8217;s computer and phone links to the outside world.

Computer viruses, faulty transmission lines, even heavy message traffic all can degrade the base&#8217;s communications, O&#8217;Malley said &#8212; but the transmission center staff &#8220;can identify where there&#8217;s problems with the lines so that, as necessary, they can move over to back-up or redundant lines to ensure that there&#8217;s 100 percent reliability.&#8221;

Evaluators looked at criteria including how well the centers did in reporting communications problems and keeping higher headquarters updated on repairs; in restoring downed systems, and in ensuring &#8220;service reliability&#8221; &#8212; working to avert conditions that could cause the systems to fail, O&#8217;Malley said. Of seven criteria, Kunsan got top scores in five, he said.

The transmission center &#8220;provides all communication links into and out of Kunsan Air Base,&#8221; said Tech. Sgt. Steven Haile, noncommissioned officer-in-charge. &#8220;That&#8217;s phones and networks, and we&#8217;re able to pass mission data, so it&#8217;s very vital and very critical to our mission.

Like other airmen at Kunsan, Haile has benefited from long-distance calls.