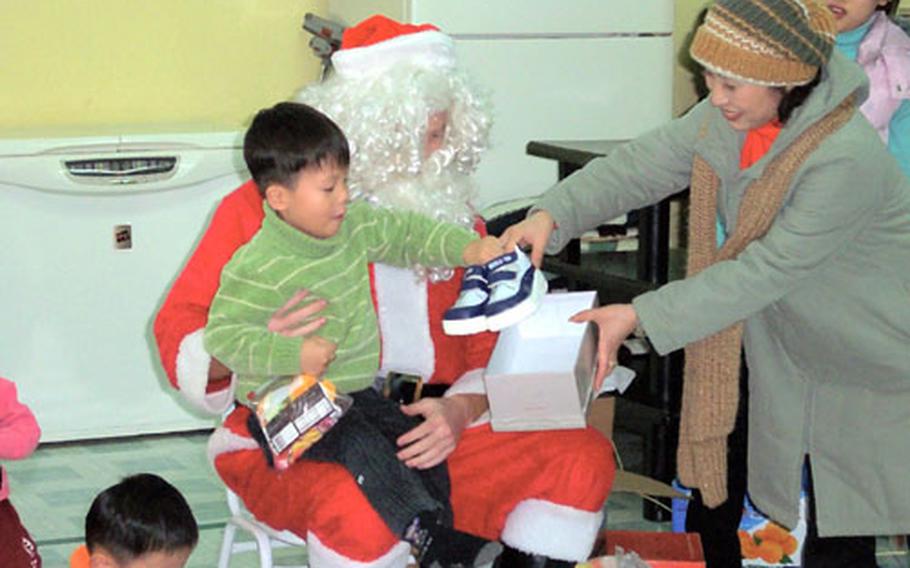 KUNSAN AIR BASE, South Korea &#8212; Tech. Sgt. Russell Leatherman&#8217;s children are in Montgomery, Ala., but he spent Christmas with a new kind of family.

Leatherman and airmen from the 8th Security Forces Squadron raised $2,500 for the Samsung Orphanage and threw a huge Christmas party for its residents.

Airmen throughout the 8th Fighter Wing raised about $10,000 for various orphanage projects, making it among the most successful charity drives in recent years, said Rosemary Song, community relations specialist.

Children at the Samsung Orphanage needed winter and school clothes, Leatherman said. To raise money, airmen put up a Christmas tree with the children&#8217;s pictures, and they could choose a child to sponsor.

The goal was $1,800, but airmen donated $2,500, Leatherman said. They sponsored a contest in which airmen could pay 50 cents to enter a raffle to throw a pie in the face of a senior commander. That netted about $800. Voted &#8212; via the volume of raffle tickets sold &#8212; most likely to get a pie in the kisser: Master Sgt. Steven Bliss, who brought in $250, Leatherman said.

Chosen victims could get out of the predicament by matching the pot of money, he said, but Bliss took the pie.

On Christmas, Leatherman and other airmen spent the day cooking hamburgers and hot dogs while hanging out with the children.

Many of the 55 children have lost both parents, said manager Yi Hang-paek. Kunsan airmen visit two or three times a year, he added.

They carry the children on their backs, play soccer and bond. Although they don&#8217;t speak the same language, &#8220;even without translation, body language is just enough,&#8221; Yi said.

When 1st Lt. Ben Bartlett, an F-16 pilot, arrived at the Kae Chong Orphanage on Christmas Day with other airmen, he saw the children waving at them through the window.

Pilots from the 35th and 80th Fighter Squadron donated money and bought hundreds of dollars&#8217; worth of medicine and shoes for the orphanage&#8217;s 42 children.

Bartlett played Santa Claus and got mobbed by children when he entered.