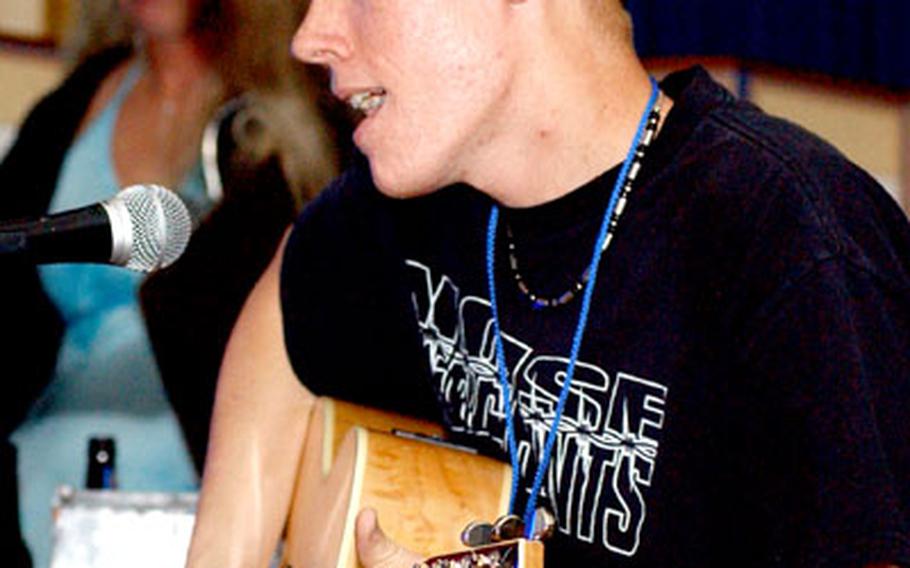 Airman 1st Class Shannon Davis — shown performing during the first round of the “Sing Like Hootie” music competition Friday at Kunsan Air Base, South Korea — won a backstage pass to Hootie and the Blowfish’s Monday show on base. “Everybody was cheering and whatnot, handshakes all around,” he said. (Herb W. McConnell / Courtesy of U.S. Army)

OSAN AIR BASE, South Korea &#8212; When Airman 1st Class Shannon Davis was stationed in Louisiana, his rock band played gigs in Shreveport about once every two weeks.

Now stationed at Kunsan Air Base in South Korea, Davis has his acoustic guitar with him but hasn&#8217;t played much.

But then came the news that the big-selling rock band Hootie and the Blowfish would perform at Kunsan this month, headlining an Air Force-sponsored tour of several Pacific bases.

The tour prompted base officials to hold a &#8220;Sing Like Hootie&#8221; karaoke contest. The winner was promised a backstage pass to the concert.

Then Davis heard an airman friend was planning to enter the contest.

A few weeks ago, 11 contestants took their turn in front of a 40-member crowd at Kunsan&#8217;s Loring Club for a preliminary competition, Davis said.

Though most sang Hootie songs karaoke-style with recorded music coming over the speakers, Davis accompanied himself on his acoustic guitar and sang a Hootie number, &#8220;Time.&#8221;

The crowd voted by written ballot; the surviving five singers, including Davis, went into the final Friday at Kunsan&#8217;s Falcon Community Center.

After the last song was sung, the audience submitted their votes, so officials could read the winner.

&#8220;Everybody was cheering and whatnot, handshakes all around,&#8221; Davis said Monday, just hours before the Hootie show was to open.

Although Hootie and the Blowfish are headlining the tour, the opening act for Monday&#8217;s show was the Pacific Air Forces Band of the West and the Air Force Reserve Band, playing contemporary rock music. Also on the tour are four members of the New England Patriots cheerleading squad.

As the big evening drew closer Monday, Davis was looking forward to his backstage pass.