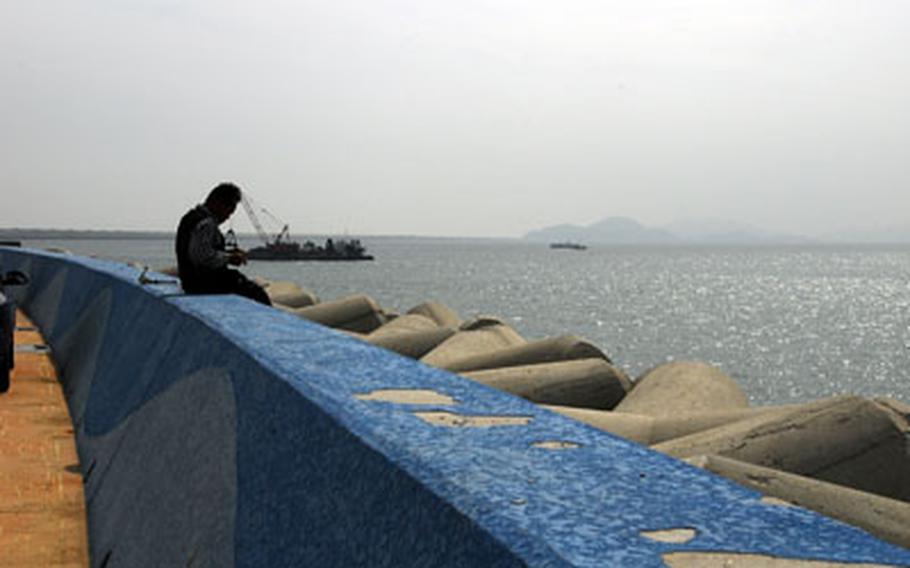 A man fishes off the Saemangum Seawall in Gunsan City, South Korea, on Sept. 28 ()

SEOUL, South Korea &#8212; Blue-collar Gunsan City calls itself the "Dream Hub," a slogan that reflects its ambitious plan to become East Asia&#8217;s next big port, tourist destination, industrial complex and science and environmental research center, all wrapped into one.

To that end, this South Korean city on the edge of the Yellow Sea has built one of the longest manmade dikes in the world, and is slowly expanding its borders by turning what used to be ocean into land.

But the tiny U.S. air base that sits on the city&#8217;s edge could force Gunsan to dramatically scale back its plans.

City officials have asked Kunsan Air Base officials if the runway could be used for commercial flights to and from China, just as the military permits its use for domestic flights operated by Korean airlines.

"It&#8217;s that one in a million [chance] where you have a terrorist on these planes," Col. Jerry Harris, then-commander of Kunsan&#8217;s 8th Fighter Wing, said in an interview before leaving the position Sept. 15. "You start offloading passengers that haven&#8217;t gone through [immigration], and the ROK (Republic of Korea) government may not be certain who&#8217;s on those planes."

That leaves Incheon International Airport near Seoul &#8212; a four-hour drive from Gunsan &#8212; as the closest major airport where travelers can clear immigration and customs on trips to and from South Korea.

"We thought it would not be a big deal for them to approve our request," said Yang Hyun-wook, director of Chonbuk province&#8217;s Railways and Airport Affairs Department.

On a typical day, several commercial flights land at the Gunsan municipal airport side of Kunsan Air Base, taxiing off the common runway into a commercial terminal separated from the rest of military facility by a gate.

The commercial airport has only two carriers, Korean Air and Eastar Jet, and they fly to just one destination &#8212; semi-tropical Jeju Island, a popular vacation spot in South Korea.

At first glance, this city with an economy based on farming, fishing and industry might not seem like the next big thing in Asia. But Gunsan is one of the closest foreign ports to emerging superpower China, and it has the kind of deep-water harbor that shipping companies like, said Yu Jae-won of the city&#8217;s Saemangum Support Division.

Baik Hyung-il, director of the city&#8217;s Construction and Transportation Bureau, said Gunsan is luring more shipping companies than any other port in South Korea, even bustling Busan, the country&#8217;s second-largest city.

And a common question foreign investors ask is whether Gunsan has its own international airport.

"They hesitate to use Incheon airport to come all the way down to Gunsan," he said. "They are very busy people, you know."

At the center of the city&#8217;s expansion plan is the $18.7 billion Saemangum Seawall, which has attracted 13 million tourists in the past four years, the city says. When the project is finished in 2020, Gunsan officials say the city&#8217;s footprint will have grown by 42 percent and its population by 67 percent.

Whether Kunsan allows the flights on its runway "will decide the fate of our province," said Yang, the provincial railways and airport director. The city will grow without the international flights, but it won&#8217;t come close to what leaders envision. Some investors already have pulled out of planned business projects because Gunsan City has no international flights, he said.

"We cannot say that anything is more critical right now than this," he said.

"If this is something that we feel needs to happen from the U.S. and ROK alliance, then we can look at increasing our manning so we can support international flights coming in," he said.

U.S. Forces Korea spokesman Maj. Todd Fleming said South Korea must request a change to the Status of Forces Agreement, which sets rules for the use of military facilities between the two countries, before it will consider allowing the international flights.

But an Aug. 19 letter from Col. Barre Seguin, commander of Kunsan&#8217;s 8th Operational Group, to Gunsan officials denying the request for international flights doesn&#8217;t mention the SOFA, only that "we must deny it due to the potential security implications of such flights."

USFK said the South Korean government has not requested a change in the SOFA. South Korea&#8217;s Ministry of Land, Transport and Maritime Affairs also said the matter falls under the SOFA, but that changing the agreement would be a complicated process.

The city and province are quietly hoping to persuade Kunsan&#8217;s new commander to allow international flights, possibly from Taiwan or Japan instead of China.