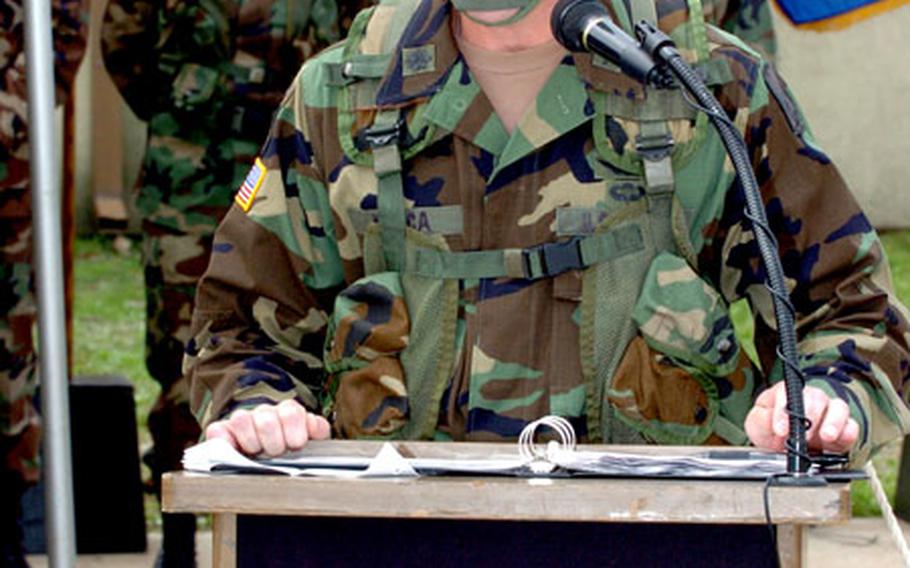 CAMP HUMPHREYS, South Korea &#8212; An Army Chinook helicopter unit in South Korea that will soon become part of a new type of aviation brigade bade a warm farewell to its departing commander Friday and welcomed his replacement during a ceremony at Camp Humphreys.

Amid the rousing strains of the 8th Army Band and the bellowing of drill commands, Lt. Col. Scott P. Kubica assumed command of the 2nd Battalion, 52nd Aviation Regiment, known as the &#8220;Nightmare Battalion.&#8221; The unit flies the heavy-lift CH-47 Chinook.

Kubica replaced Lt. Col. Richard A. Juergens Jr., who had led the battalion since June 2003 and is headed to the Joint Special Operations Command at Fort Bragg, N.C.

The Army is converting the bulk of its tactical aviation forces to the MFAB organizational model, though the brigades will not include Army aircraft assigned to special operations duties, Army officials have said.

&#8220;In front of you today, you see the first formation of the 2-52 GSAB,&#8221; 17th Aviation Brigade commander Col. David J. Abramowitz said from the podium, while ranged across the flight line stood the battalion&#8217;s seven companies.

Abramowitz reserved warm praise for Juergens, his wife and seven daughters, calling the officer &#8220;the finest leader and battalion commander I have ever worked with. There is no comparison.&#8221;

Addressing Kubica, Abramowitz said, &#8220;Scott, you are ready. Your outgoing personality will keep this unit strong. You have some busy months ahead of you, but I know you are the right commander to carry this unit forward.&#8221;

In brief remarks, Kubica told the troops he looked &#8220;forward to working with and taking care of each and every one of you.&#8221;

Kubica&#8217;s previous assignment was as aviation and G7 plans officer for NATO Component Command &#8212; Land Madrid, in Spain. He was commissioned in the field artillery branch after graduating in 1986 from Officer Candidate School. He graduated flight school in 1992.

He holds a master&#8217;s degree in management from Webster University in St. Louis. He has served in Afghanistan and Iraq, and has been awarded the Bronze Star with two oak leaf clusters, among other decorations.