Kubasaki students put eye on the sky from across the globe 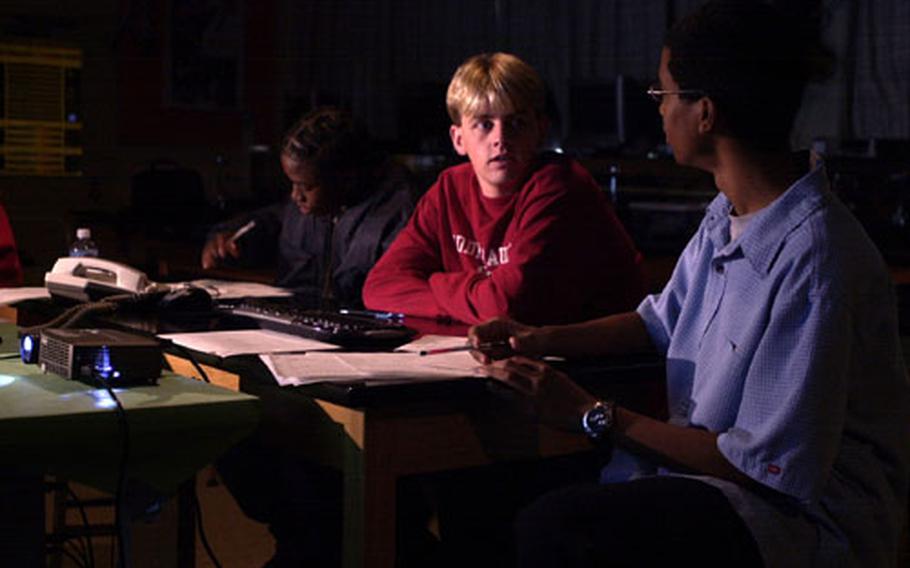 Thaddeus Reap, left, records data while Nicholas Ziegler, center, talks with Phillip Clark during the students&#39; time controlling the Goldstone Apple Valley Radio Telescope in Apple Valley, Calif. The three students are juniors at Kubasaki High School on Okinawa and were the first students to take part in the GAVRT program at the high school. (Fred Zimmerman / S&S)

The radio telescope project is the result of a partnership among NASA, Jet Propulsion Laboratory and Lewis Center for Educational Research, said science teacher John Thomas.

Students can use the telescope, which is dedicated for high school education, if they help with research, he said.

&#8220;The average NASA scientist won&#8217;t get near as much time on a radio telescope as these students are,&#8221; Thomas said. &#8220;I know professional astronomers who have never run a radio telescope. But here we have a group of students who are part of an investigative team trying to answer questions that are in the scientific community.&#8221;

This is the first time Kubasaki students have taken part in the project and the first time overseas students controlled the telescope via the Internet, said Serena Fields-Villareal, radio telescope mission control operator.

But in the past, Lewis Center sent a computer to schools for the project. Schools would control the telescope through a special telephone hook-up.

Thomas said being the first school to test the Internet connection was a bit worrisome &#8212; especially when, during telescope calibration, their computer system froze.

But about 30 minutes later, after rebooting and reconnecting, students took control of the telescope and began their project.

Phillip Clark, a junior, was first.

He ran the telescope through a few initial scans of predetermined targets.

The scans ensure the equipment is operating correctly before the students begin their main mission of scanning Uranus, Thomas said.

Fields-Villareal was on speakerphone with students throughout their more than three hours at the controls, guiding them through the process while watching their every move on her computer at mission control.

She provided them coordinates to scan for seasonal differences.

Thomas previously attended a radio telescope workshop and spent five days learning the basics of radio astronomy, how to control the telescope and guidelines for using the program&#8217;s tough curriculum.

Thomas said students will have several more opportunities to work with the telescope during the school year.