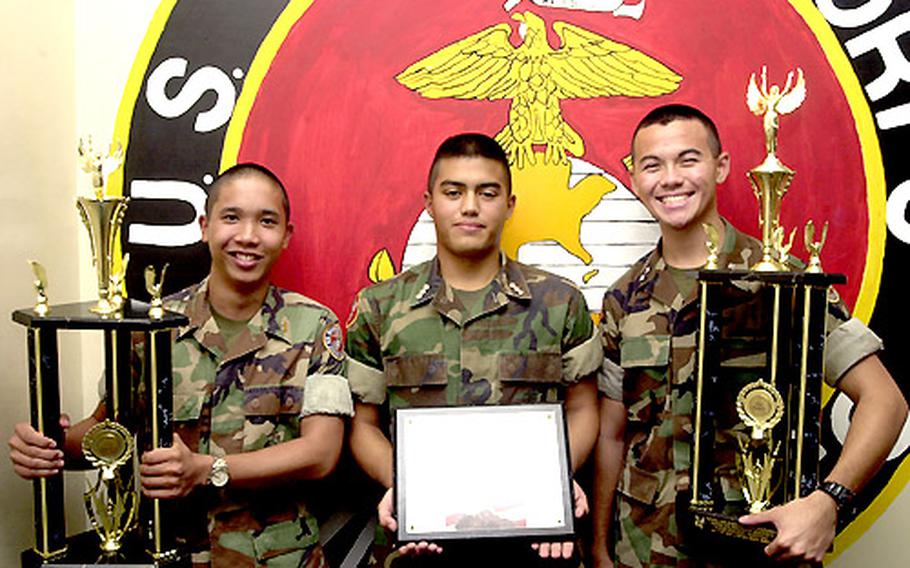 Members of the only Department of Defense Dependents School team to compete, they used M-14 rifles to take third place in their division &#8212; Demilitarized Arms Masters &#8212; beating out 38 schools from 17 states.

The national competition is run under Army regulations, which allow variations of drill movements. But, McNair said, his unit doesn&#8217;t operate that way.

McNair said other Marine units adapted their routines and added Army movements. But, he said, &#8220;Kubasaki High School showed, without a doubt, that strict Marine drill can survive at the nationals.&#8221;

This was the first year the Kubasaki team competed at the Masters Level in the Demilitarized Arms Division at nationals, McNair said. The team competed in 2001 and 2002 in the Challenge Level, finishing respectively as runner-up and in first place. McNair said the team took last year off to focus and prepare for the next level.

The team had just one member who had competed nationally before, Cadet Lt. Col. Nicholas Smith, the battalion commander. He said he helped prep the team by telling them what the competition was like when he went. But he admitted he also was amazed at the level of competition. &#8220;I can go into Far East and know we&#8217;ll come out on top,&#8221; he said, &#8220;but masters at nationals is another level.&#8221;

Team members said capturing their awards took practicing two or three hours a day, five days a week &#8212; and on plenty of Friday nights and Saturdays during &#8220;drill camp.&#8221; And, they said, they&#8217;re especially proud to be the number one Marine Corps JROTC team in the nation.