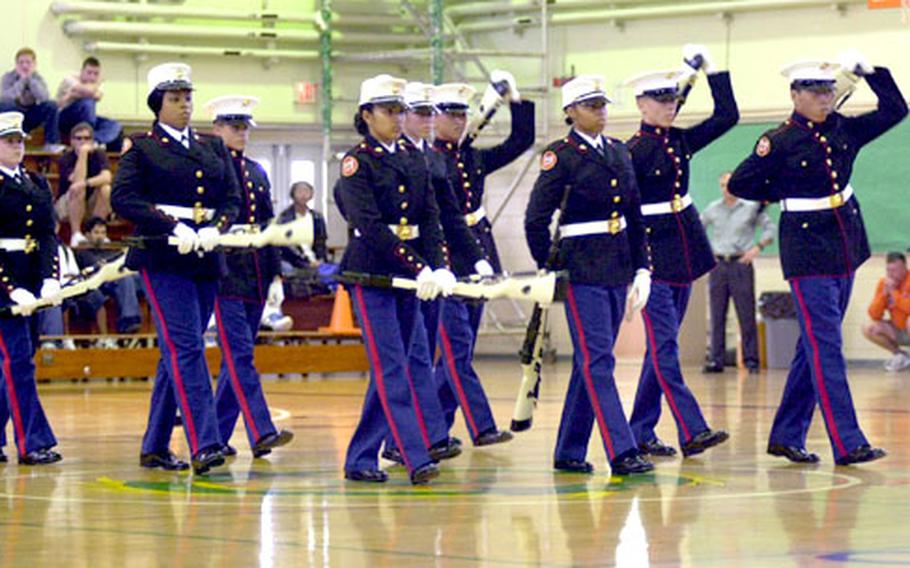 CAMP FOSTER, Okinawa &#8212; The old adage of practice makes perfect is ringing true throughout the halls of Kubasaki High School.

The team finished first in six of the 10 events held at Misawa Air Base last week. This is the third year in a row the team has taken top honor, and the seventh time in the last nine years, according to retired Marine Master Sgt. Larry McNair, the school&#8217;s JROTC instructor. The other two years have resulted in a second- and third-place finish.

The trek to first place began the second week of August 2004, McNair said. That&#8217;s when the team began practicing five days a week, two hours each day, after school and the occasional Saturday. While McNair may be the driving force, he said the students have the desire.

Cadet Pfc. Ashley Jones said she was easily putting in 16-hour days with school and JROTC practice. She said the team members were nervous about this year&#8217;s competition, but they performed well because they &#8220;believed in each other.&#8221;

The first-place finish made all the long days, weekend practices, drill camps and fund-raising bake sales worth the time and effort, according to team members.

&#8220;We were confident because this school has set a high standard and we wanted to live up to that,&#8221; said Cadet 2nd Lt. Derek Bailey. He said it was nerve- wracking waiting for the results, but the team was relieved when they got final word.

Going into the competition, McNair said he was confident his team would do well, but not over-confident.

Fielding a winning team is tough, McNair said, especially when seniors graduate and up to nine new cadets must be trained for competition. But with the grueling practice schedule and dedication of the students, McNair believes his team can continue to excel. He&#8217;s so confident in his team, he said, &#8220;you could put them in a formation of real Marines and you wouldn&#8217;t be able to tell them apart.&#8221;