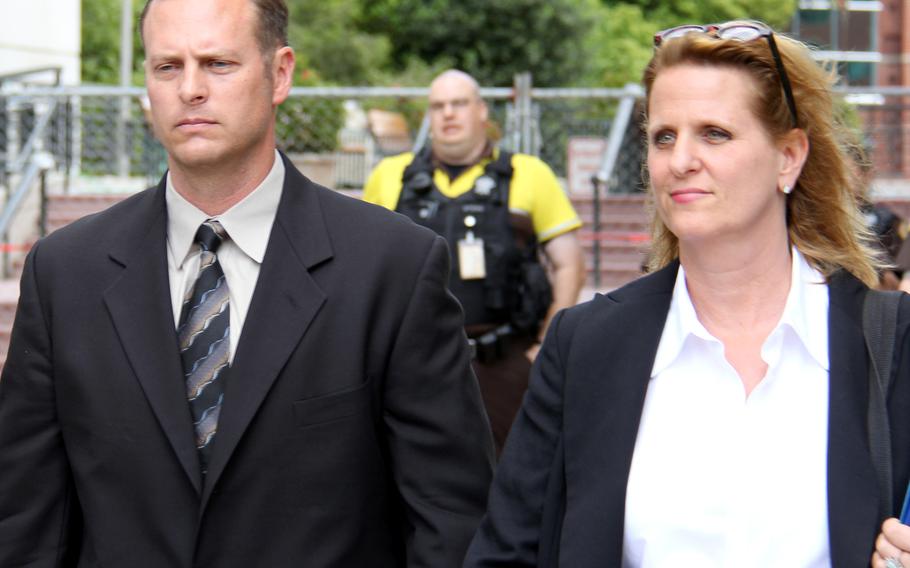 Buy Photo
Lt. Col. Jeffrey Krusinski, the Air Force’s point man on sexual assault prevention programs, leaves Arlington County courthouse in May 2013 with his attorney after not entering a plea to one count of sexual battery. (Rick Vasquez/Stars and Stripes)

ARLINGTON, Va. — The Air Force’s recently removed head of sexual assault prevention and response did not enter a plea to charges of sexual battery Thursday, just days after his arrest inflamed an already heated debate about the military’s efforts to stop sexual assault.

His trial was set for July 18.

Lt. Col. Jeffrey Krusinski, 41, of Arlington, Va., was arrested early Sunday morning, according to Arlington police. He was accused of approaching a woman in a parking lot and grabbing her breasts and buttocks, according to the crime report. He was released Sunday on a $5,000 personal recognizance bond.

Lt. Col. Laurel Tingley, an Air Force spokeswoman, said Krusinski was removed from his position when the Air Force learned of the arrest.

Assistant Commonwealth of Virginia Attorney Cari Steele said sexual battery is a class 1 misdemeanor, and that Krusinski could face a fine up to $2,500 and/or up to 12 months incarceration.

Wearing a navy blazer, tie and brown slacks, with a faded bruise and small scab on his cheekbone, Krusinski entered the courthouse well before the proceedings and was ushered out a rear exit, away from waiting cameras.

Air Force Chief of Staff Gen. Mark A. Welsh III told Congress on Tuesday that the Air Force had requested jurisdiction in the case. He also said Krusinski had a good military record before his arrest.

Krusinski, according to court records, is a divorced father of two whose ex-wife and children live in Ohio. He lives in Arlington. He has served in Afghanistan and Iraq and graduated from the U.S. Air Force Academy. In 2009, he was recognized by Air Mobility Command’s Manpower, Personnel and Services Directorate as the Force Support Field Grade Officer of the Year while he was the commander of 6th Force Support Squadron at MacDill Air Force Base in Tampa, Fla., according to an archived news release on the Air Force’s website.

The Air Force has been in the spotlight in recent months for several sexual-assault-related incidents, including a case in which a fighter pilot convicted of sexual assault had his sentence overturned by a three-star general and dozens of reports of assault and inappropriate sexual relationships at the service’s boot camp.

According to the DOD’s annual report on sexual assault, which was released Tuesday, the Air Force saw 449 unrestricted reports of sexual assault in fiscal 2012 and 341 reports that remained restricted, or anonymous, at the end of the year.