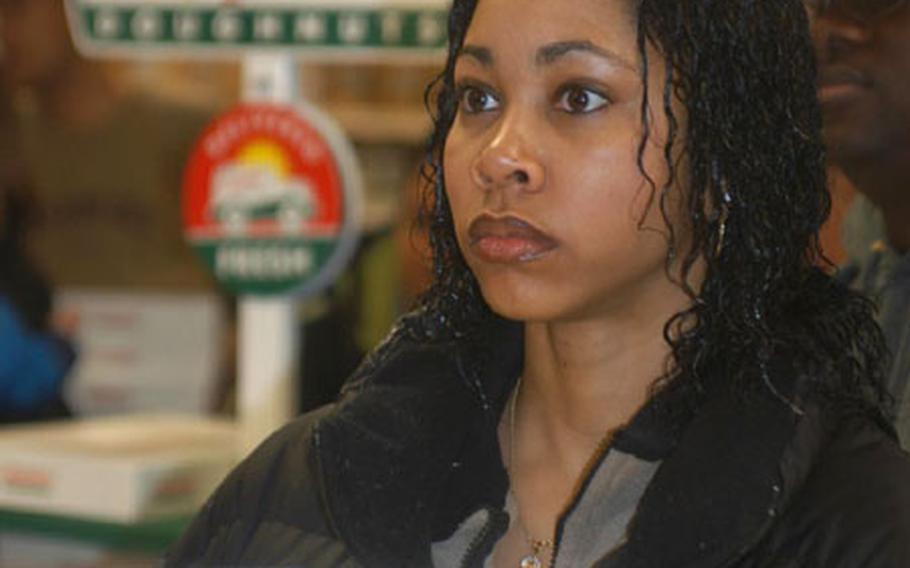 Stephanie Walton is one of the first customers Saturday to buy Krispy Kreme doughnuts at the RAF Lakenheath, England, shoppette. The famous American doughnuts will be sold each Saturday this month at RAF Lakenheath and RAF Mildenhall on a test basis. (Ron Jensen / S&S)

RAF MILDENHALL, England &#8212; Larry and Khin Sanders had gone seven years between bites of Krispy Kreme doughnuts before buying three dozen of the venerable pastries Saturday at the BookMark at RAF Mildenhall, England.

Krispy Kreme doughnuts will be sold each Saturday this month at RAF Mildenhall and RAF Lakenheath. If successful, the company that expanded to the British market last fall will consider selling its product to other bases in the United Kingdom.

For starters, the company delivered 800 dozen original glazed doughnuts Saturday to the shoppette at RAF Lakenheath and the BookMark at RAF Mildenhall. The choice may expand in the future. The doughnuts were brought in trucks from the factory in Surrey about 100 miles away.

People were waiting in line for the sales to begin before the product even arrived. One dozen of the treats cost $10.25.

At RAF Lakenheath, Tech. Sgt. Nathaniel Achord of the 48th Aircraft Maintenance Squadron was hoping to surprise his wife, Vickie.

Ana Middleton, general manager of AAFES in the United Kingdom, said the exchange service has been trying to form a business relationship with the doughnut maker since Krispy Kreme opened a shop at Harrods department store in London last October.

Taylor was asked if the doughnut maker has any plans to take its product to American military bases on the Continent.

But, she said, the company will examine possible ways of getting its doughnuts to other American bases.

In the meantime, here are a few doughnut facts to chew on from the Krispy Kreme Web site:

&#8226; Vernon Rudolph opened the first Krispy Kreme in Winston-Salem, N.C., in 1937, four years after buying the secret recipe from a French chef from New Orleans.

&#8226; In 1997, Krispy Kreme artifacts were contributed to the Smithsonian Institution&#8217;s National Museum of American History in Washington, D.C.

&#8226; About 7.5 million Krispy Kreme doughnuts are produced each day; more than 2.7 billion annually.

&#8226; Enough doughnuts are produced each week to make a line of doughnuts from New York City to Los Angeles.