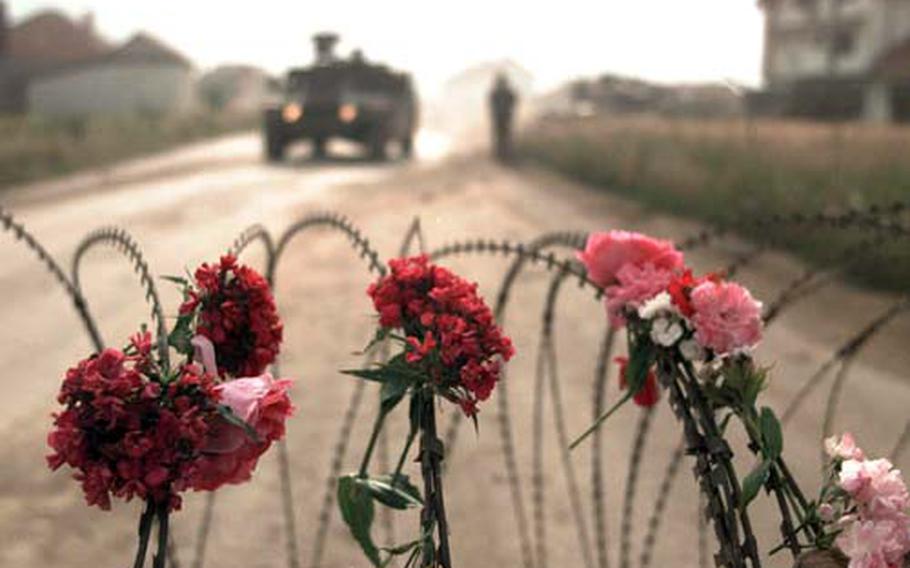 Just weeks shy of its 50th birthday, NATO had never engaged in a large-scale war.

Convinced that Yugoslav President Slobodan Milosevic would not bring an end to ethnic violence in the province of Kosovo without a demonstration of force, the 19-member alliance decided to launch air and missile strikes.

"Our military objective is to degrade and damage the military and security structure that President Milosevic has used to depopulate and destroy the Albanian majority in Kosovo," then-U.S. Secretary of Defense William Cohen told a Senate committee a few weeks into the conflict.

Operation Allied Force was mostly an air campaign featuring more than 38,000 sorties over a 78-day period. More than 900 aircraft from NATO countries participated in various capacities &#8212; about two-thirds of them coming from the United States.

Many of the sorties were launched from bases in Italy, but other attacks came from naval ships in the Adriatic Sea and an expanding number of other countries as the conflict continued. By early June, aircraft were launching attacks from bases in 15 countries, including a few that hadn&#8217;t yet been granted NATO membership. B-2 bombers launched into battle for the first time, taking off from Whiteman Air Force Base in Missouri and returning once they completed their missions.

Click on a point on the timeline to view events.

Gen. Wesley Clark, the ranking U.S. and NATO military commander in Europe, also was ready to send in Army Apache helicopters. With the help of C-17 Globemasters &#8212; also making their first appearances in a combat zone &#8212; the U.S. ferried more than 5,000 troops and an array of attack helicopters to Albania and also had some assets in the former Yugoslav republic of Macedonia. But political concerns &#8212; both in the U.S. and other NATO countries &#8212; largely kept Army assets south of the border. U.S. political leaders feared such missions would result in a large number of U.S. casualties, and other countries were against escalating the conflict by using ground-based forces.

Some NATO members thought the campaign would be over in a few days. Others weren&#8217;t so sure.

NATO started off with a plan to bomb a few strategic targets and escalate only if necessary. NATO members more sympathetic to the Serb cause thought Milosevic might back down.

Leaf was commander of the 31st Fighter Wing at Aviano Air Base during the campaign and flew more than a dozen sorties himself.

He didn&#8217;t fly a mission on the first night of the campaign, but said he remembers a speech he made to his F-16 pilots before they flew their missions.

The Serb tactics also meant that NATO aircraft couldn&#8217;t clear the way for lower-altitude missions. Pilots were able to effectively target larger positions, such as buildings or bridges, from higher altitudes, but their ability to hit Milosevic&#8217;s forces was much more limited.

Not having to worry about a ground attack, his forces were able to stay in small groups and keep tanks and heavy equipment out of sight.

Furthermore, the initial NATO attacks didn&#8217;t stop Serb forces from expelling ethnic Albanians from their homes. In fact, the expulsions only increased in the first few weeks of the campaign. Hundreds of thousands &#8212; estimates still vary today &#8212; fled into neighboring countries, and NATO forces were faced with a large humanitarian mission in bordering countries.

C-17s again played a large role as hundreds of tons of food and supplies were brought in.

Milosevic&#8217;s decision to create so many refugees probably saved the campaign, and possibly the alliance, according to Edward Luttwak, a frequent consultant to the Department of Defense and a critic of some U.S. military operations.

"When the bombing started ... if Milosovic hadn&#8217;t moved and hadn&#8217;t expelled Albanians, I believe two crucial European governments, without which the war could not be pursued, would have insisted on the suspension of the air war," Luttwak said at forum in Aug. 16, 1999, a few months after the campaign ended.

Instead, the exodus strengthened the NATO resolve.

At a summit in Washington less than a month after the air raids started, the alliance agreed to expand the scope of the campaign. That allowed Air Force leaders who had been pushing for a more aggressive campaign against Serbian infrastructure targets to carry out more missions. Other missions still targeted Serb troops in Kosovo.

Pictures of thousands of refugees helped to offset reports of casualties suffered by civilians in Serbia and Kosovo. Human Rights Watch eventually calculated that between 489 and 528 civilians were killed in Serbia or Kosovo as a result of 90 incidents. NATO blamed many of those on faulty information that led pilots to attack unintended targets.

Leaf remembers one incident in particular when American and French aircraft mistakenly targeted an ethnic Albanian refugee column on April 14 in the belief that it was a Serb military convoy.

He said he met the brother of a 17-year-old girl killed in that attack in 2002 and the two still maintain a close relationship.

Five days after the attack, though, Leaf had to go before television cameras at a news conference and try to put the event into perspective: While the alliance was doing good while attacking the enemy, it still had mistakenly killed civilians on the ground.

Leaf said that was one of his lowest points during the campaign.

In contrast, one of his highest was flying over Kosovo on the last day of the campaign when he was told to abort his mission because the two sides were working on a peace agreement.

"So I got to be over Kosovo at the moment of victory," he said. "It&#8217;s hard to describe what my feelings were after all we had gone through."

Experts analyze the air campaign over Kosovo from an air power perspective and look at NATO&#8217;s effectiveness