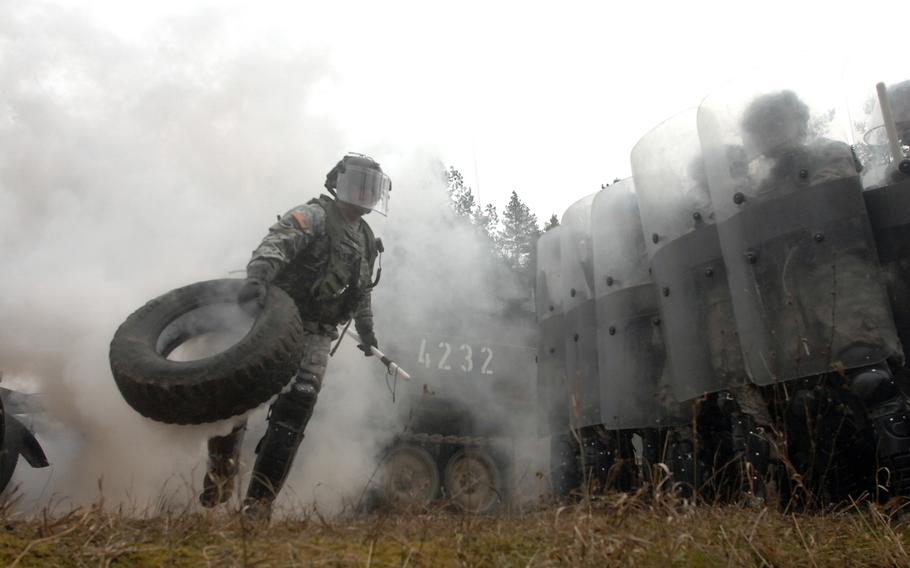 A soldier hurls a smoking tire away from the action during a civil disturbance training exercise at the Joint Multinational Readiness Center in Hohenfels, Germany, on Nov. 17, 2011. A new unit of National Guardsmen from the 29th Infantry Division will begin training for their deployment to Kosovo at the training center, Monday, Jan. 20, 2014. (Steven Beardsley/Stars and Stripes)

HOHENFELS, Germany — NATO troops headed for Kosovo are receiving special training on riot control, including instruction on how to protect themselves when Molotov cocktails are tossed at them during violent clashes with protesters.

Maj. Douglas Holt, the lead planner for the exercise Kosovo Force 18 (so called because this is the 18th time the training has been held), said the training exercise at the Joint Multinational Readiness Center in Hohenfels for the incoming contingent of peacekeepers uses real-world scenarios to get the multinational force ready to operate in an area of the world that remains a hotspot for ethnic tensions and violent political protests.

As part of the training, Portuguese fire phobia instructors will traing troops how to overcome the natural fear of fire, Holt said.

“Crowd riot control events often involve Molotov cocktails and that sort of thing. So, the Portuguese give our units skills as far as how they respond to these kinds of implements, how they keep their units safe and how they exercise discipline in the face of that kind of fear,” Holt said.

Even as the U.S. military is reducing its footprint in Europe due to changing strategic focus and shrinking programs because of budget cuts, the Joint Multinational Training Command at Hohenfels, Germany, remains robust, hosting dozens of training events annually. The Kosovo Force training, which runs through the end of January, is one of the largest.

KFOR has been in Kosovo since 1999, when NATO ejected Serb forces from the province, which is mostly inhabited by ethnic Albanians. Since then, KFOR’s numbers have steadily shrunk to about 4,700 troops from 32 countries. Among those involved in the training are 725 Americans. Virginia and Maryland National Guardsmen from the 29th Infantry Division, who are part of that contingent, will be acting as battle group leaders, as well as undergoing the training.

Although inter-communal tensions between Kosovo’s mainly Albanian government and the Serb minority have significantly abated over the past year, the possibility of protests and riots remains constant.

“This training is their last opportunity for them to make a mistake,” said Don Mills, lead planner for KFOR 18. “The next time they’ll have the chance to try things out, is when they’re out in the field.”