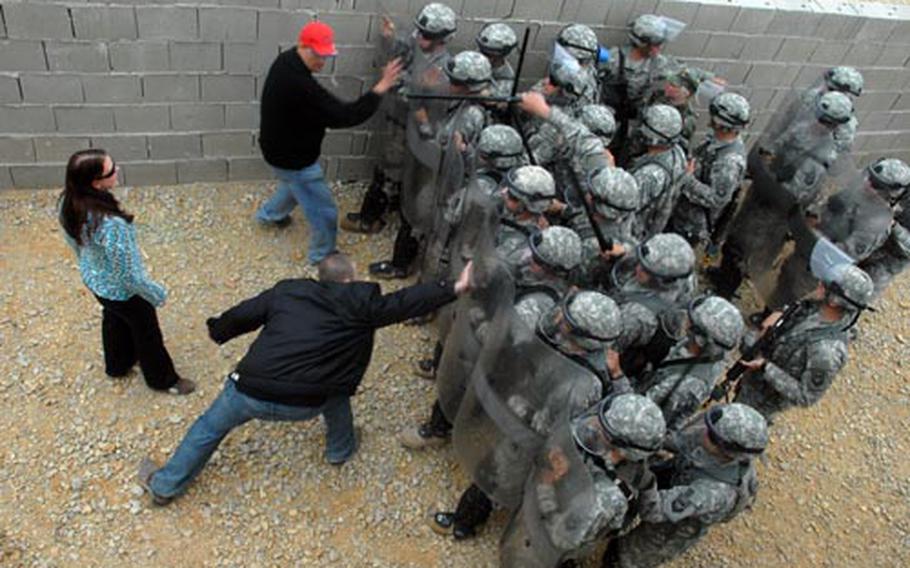 HOHENFELS, Germany &#8212; Clutching plastic shields and clubs that made them look like Roman centurions, U.S. military police advanced on the Circle Town jail.

Moments earlier, the prisoners had locked up the guards and started to riot, and it was up to the MPs to restore order &#8212; a job that involved the use of a megaphone, riot gear and a certain amount of physical force.

The MPs were from the Kosovo-bound 3175th Military Police Company, Missouri National Guard out of Warrington, Mo., and the rioters were role-players helping train them at Hohenfels&#8217; Joint Multinational Readiness Center on Tuesday.

Ironically, NATO officials complained last month that they did not want Kosovo Force troops to shoulder tasks, such as riot control, that were supposed to be taken over by a 2,200-strong European Union force this summer. Due to bureaucratic holdups, the EU force is not expected on the ground until autumn.

The training at Hohenfels is designed to replicate situations the MPs might face in Kosovo during a yearlong deployment, he said.

Riots broke out there as recently as April when ethnic Serbs protested Kosovo&#8217;s declaration of independence from Serbia.

In one of the Hohenfels training scenarios, a crowd obstructs a main supply route into a town and a platoon is sent to clear the road. In another, the MPs must arrest a bad guy at a town&#8217;s market square, Lamp said.

"Some of the people in the market are peaceful and some don&#8217;t want the guy to leave because they are anti-American," he said.

Second Lt. Shane Spellman, 33, of Springfield, Mo., who serves full-time with the 3175th, said the unit does similar training in the U.S. but without the interpreters and foreign role-players available at Hohenfels.

"Riot training is a lot of fun. Any time we can get out and get the gear on and train in the formations is always a blast," he said.

At Hohenfels, the MPs have learned a few new British techniques and formations but mostly the training is about building confidence in things they already know, Spellman said.

"The key is to maintain your senses when the rioters are losing theirs," he added.

The MPs&#8217; mission in Kosovo will be to provide a safe and secure environment for the people of Kosovo, "&#8230;and allow them freedom of movement so they can have their independence," he said.

The deployment to Europe is the first overseas trip for one of the MPs, Spc. Shane Garner, 28, of Springfield.

Garner, who works as a corrections officer for the Green County Sherriff&#8217;s Department, said he doesn&#8217;t do much riot control in civilian life but he does extract prisoners from their cells on occasion.

"Communication is the most important part of it (riot control). Just going in there hands-on," he said.

A big challenge during a riot is figuring out who is an innocent bystander and who is a rioter, he said.

"You have to properly identify them because you don&#8217;t want to let the wrong person out," he said.

About 500 personnel will do the nonlethal weapons training before the next rotation to Kosovo, Lamp said.