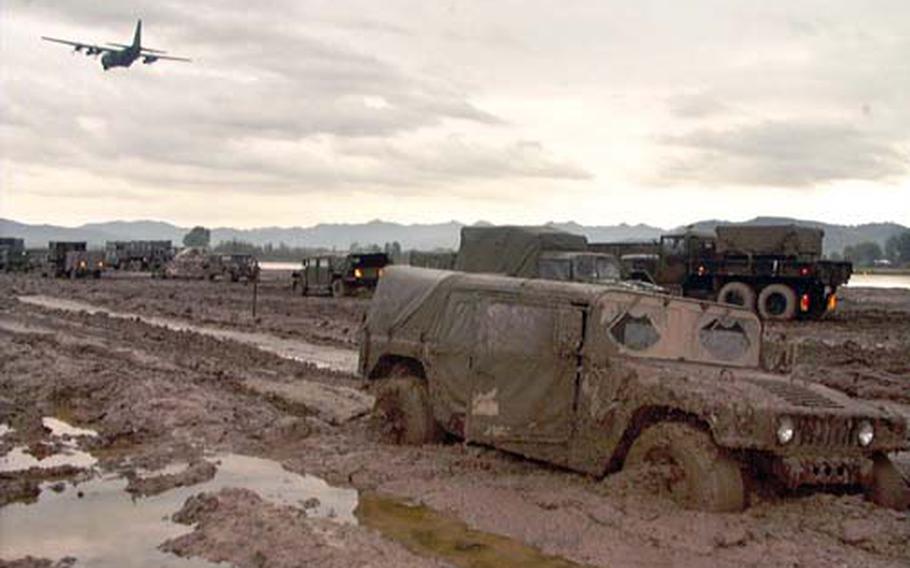 A Humvee is mired in the mud at Task Force Hawk in Tirana, Albania, in 1999. Two weeks into the deployment, the base camp was beginning to show signs of improvement, but the mud still wreaked havoc for those on the ground. In the end, the Germany-based task force and its fleet of 48 AH-64 attack helicopters never saw combat. (S&S file photo)

Part two of a two-day look back on the 10th anniversary of the Kosovo campaign. See yesterday&#39;s stories here.

As the 5-ton transport truck came to a halt, Patrick Francis, an Army warrant officer, made his way to the tailgate and hopped down. The landing was soft.

"I actually fell into a hole," Francis said last week as he recalled the early days of Task Force Hawk, dispatched a decade ago to Tirana, Albania, to supplement the ongoing NATO air campaign over Kosovo.

"It was dark," Francis continued. "I was up to my waist in mud. And it was raining, of course. It was just miserable that night."

Critics have used that same adjective &#8212; miserable &#8212; to describe the 1999 mission designed to support Operation Allied Force. (Troubled, slow and cursed are among the others.) Besides the boot-sucking mud and frequent rains, timelines got twisted, disagreements persisted over how best to use the force and two Apache helicopters crashed, one with fatal results.

"The situation at Rinas [Airfield] was chaotic," the Joint Force Quarterly, a Defense Department magazine, stated afterward. "There was limited ramp room for cargo aircraft and torrential rains had turned the surrounding area into a lake of mud. Humanitarian relief helicopters landing in open fields had sunk up to their bellies. (Apaches staging in Pisa, Italy) had to wait while concrete landing pads were constructed."

In the end, the Germany-based task force and its fleet of 48 AH-64 attack helicopters never saw combat.

One reason was because Serb soldiers were dispersed into platoon-size forces.

Given the rules of engagement and the concern for civilian casualties, the Serb posture would have necessitated low-altitude operations, exposing the Apaches more to ground fire.

Another reason was the mountainous border that offered limited and predictable air corridors for helicopters crossing into and out of Kosovo.

Still, other observers maintain the task force in Albania did have an impact.

"It was a challenging mission that presented complex problems, both at the unit and higher headquarters level," said Lt. Col. Vincent Torza, who, as a captain, commanded a company of Apaches in Albania. Those complex issues "led both elements to overcome and adapt to many of the challenges."

The biggest challenge out of the box was where to locate the task force.

Camp Able Sentry in Macedonia had been the first choice because of its existing support structure due to the long-running U.N. observer mission. However, that option was discarded several days into the air war after Macedonia declined NATO&#8217;s request, saying it didn&#8217;t want offensive operations launched from its soil.

When Albania offered in early April to host the task force, most U.S. and NATO leaders didn&#8217;t know of the limitations at Rinas, or, for that matter, across the country.

A Pentagon spokesman only compounded things when he erroneously said it would take a week to 10 days to deploy the unit, seemingly unaware of the airfield&#8217;s sorry state and the need for support and security personnel.

The faulty time line created the perception the Army was dragging its feet.

In reality, it moved rather rapidly, considering the weather, terrain, airport and the fact the Army had yet to modularized its force structure. In the end, the task force grew to more than 5,000 personnel, well above what was originally anticipated.

Task Force Hawk became fully operational on May 7, 1999. Five weeks later, Operation Allied Force was suspended pending final approval of a peace plan. In the days that followed, part of the attack helicopter task force, which also included support aircraft, redeployed to Macedonia to assist in peacekeeping operations. The balance of the force departed Albania over the next several weeks.

"From my foxhole," said Francis, now a chief warrant officer 4, "we went out there and did some great things. Valid [mission] or not, we went in did our job and came home."