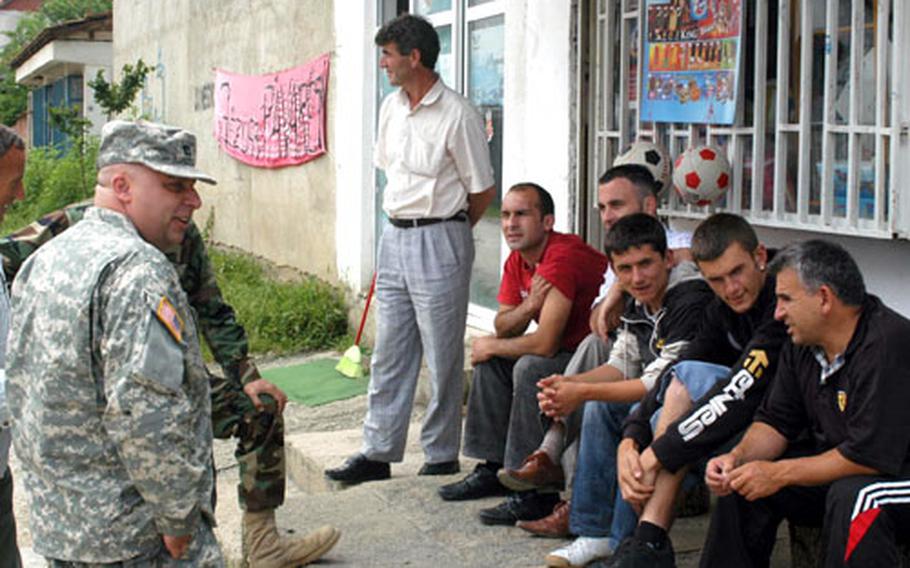 Capt. Eddie Morgan, a California National Guardsman who leads a Liaison Monitoring Team in Kosovo, tries to sense the attitude of local residents to a potential return of refugees to the village of Perlepnica. (Kent Harris / S&S)

Capt. Eddie Morgan, a California National Guardsman who leads a Liaison Monitoring Team in Kosovo, tries to sense the attitude of local residents to a potential return of refugees to the village of Perlepnica. (Kent Harris / S&S) Translator Blerim Sadiku and Sgt. Robert Meggitt talk to a local resident during a patrol in the city of Vitina, Kosovo. The man had his tractor stolen in 2000 and was hoping to receive word on how to get a replacement. (Kent Harris / S&S)

Ten years after NATO first entered Kosovo, the number of troops has shrunk to about 15,000 &#8212; with American forces making up a little less than 10 percent of that.

In fact, the mission has been so successful that last week NATO defense ministers, citing improved security conditions, decided to shrink the force further to 10,000.

Some European governments are looking to pull their forces out entirely.

"I think it&#8217;s actually one of the unwritten stories on how successful KFOR has been," said Janusz Bangajski, director of the New European Democracies Project for the Center for Strategic and International Studies.

But Bangajski argues that a large pullout at this point doesn&#8217;t make sense.

"In its current format, I don&#8217;t think [troops] need to be there indefinitely," he said in a phone interview. So reducing the force by as much as a third &#8212; which he said is a current topic among European governments &#8212; might work.

Local leaders echo that sentiment. And if anything, are more vocal in their desire to keep the troops around.

Fehmi Mujota is the government minister for the Kosovo Security Forces. A former mayor and member of the Kosovo Liberation Army, he said his force won&#8217;t be formed and trained until 2011. The force isn&#8217;t necessarily designed to replace KFOR, but it could take on some of the roles it performs. In theory, it shouldn&#8217;t have to, because local police would be able to maintain security.

&#8220;Without a stable Kosovo and a stable Balkans, there cannot be stability in Europe,&#8221; he said in an interview in his office in Pristina. He said the government still needs time to grow and meet European standards. One goal is to become a member of the European Union. Another is to join NATO. And both require time. Time that KFOR gives them.

Gnjilane&#8217;s mayor, Qemaji Mustafa, said his country needs more support from the U.S. and EU, not less. He, like many other local leaders, said KFOR has provided a secure environment. But the economy is still in dire straits. Kosovo has one of the youngest populations in Europe, but jobs are scarce. And unless there&#8217;s foreign investment &#8212; particularly in infrastructure projects &#8212; there&#8217;s little hope of adding more jobs.

&#8220;I believe for international investors, this is the time to come to Kosovo,&#8221; he said, adding that his city used to have eight state-owned factories that employed about 20,000 people. Only a few still operate and only a few hundred work at them.

Mustafa said hundreds of millions of dollars in such investments are needed annually to allow Kosovo to function on its own.

Col. Philip Butch, deputy commander for civil military operations for U.S. forces at Camp Bondsteel, said the U.S. military doesn&#8217;t have anywhere near that kind of money to spend.

The Pentagon&#8217;s budget for Kosovo has shrunk along with the number of troops assigned there. U.S. troops don&#8217;t fund as many projects as they used to.

&#8220;From an economic issue, there are still issues that need to be resolved,&#8221; said Butch, who served in the Los Angeles County Sheriff Department in civilian life.

He, like local leaders, said that KFOR continues to succeed in its primary mission: peace and security.