Kosovars encouraged to see doctors of any ethnicity at free clinics 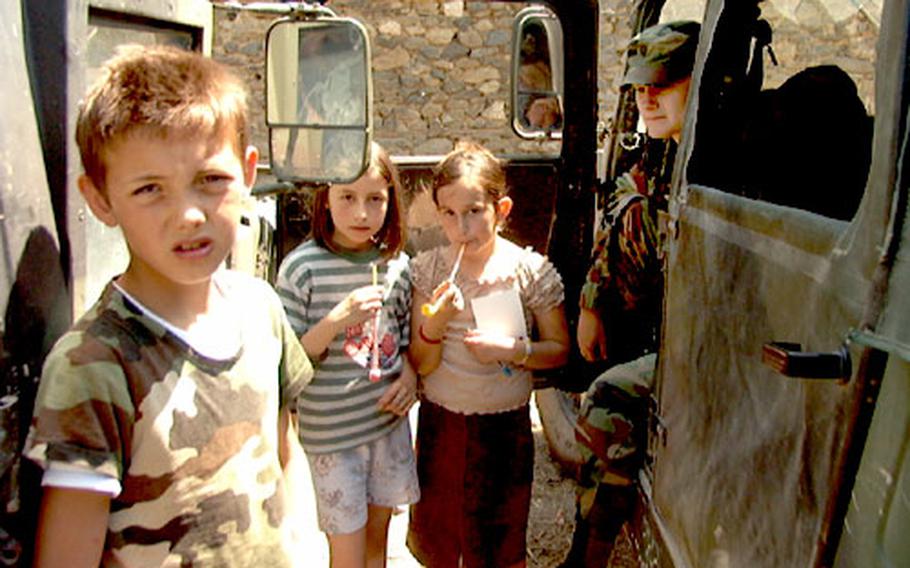 Pfc. Brandi VanBoven visits with children in Donja Bitina. Peacekeepers ran a temporary medical clinic there and in two other villages on Monday and Tuesday. (Ward Sanderson / S&S)

Pfc. Brandi VanBoven visits with children in Donja Bitina. Peacekeepers ran a temporary medical clinic there and in two other villages on Monday and Tuesday. (Ward Sanderson / S&S) 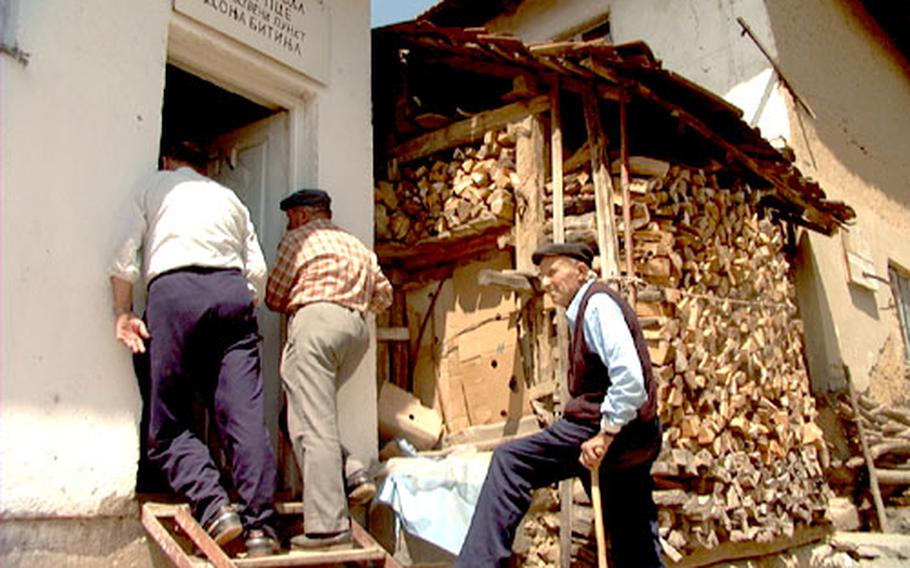 DONJA BITINA, Kosovo &#8212; The man in the dark cap and vest leaned either on the cane to his left or on the shed stacked with splintering wood to his right.

Blinking and listing, he attempted to scale the three steps to enter the makeshift clinic but suddenly froze. He was caught between his two allies, the cane and the shed, and struggled for an instant as he stood straight up and out of leaning reach of either. A young woman grabbed his arm and eased him in to see a doctor.

The man, Dusan Stojcetovic, was 80 years old. He said he didn&#8217;t know whether anything was wrong with him other than the years, but he wanted someone to check to find out.

And, somewhat novel to this hamlet and to this country, Stojcetovic was willing to see either a physician who was a fellow Serb or an ethnic Albanian.

American peacekeepers have long offered traveling clinics for Kosovars, traditionally using military doctors. But recently the emphasis has been not just on diagnosing malaise but also on preaching tolerance.

The military is trying to persuade local doctors to take on the burden of running the free clinics while coaxing them to see patients of every ethnic group. And that means that patients of every background must be willing to see the doctors.

&#8220;We wanted to coordinate and focus on giving it back to the municipality,&#8221; said Maj. Gregory Neverson, team chief for the civil affairs unit at Camp Bondsteel.

Ideally, Neverson said, the military would support the local doctors but not actually conduct the clinics itself.

On Monday, American and Ukrainian doctors and their local counterparts worked together in the mixed village of Donja Bitina. The rural area of lazy cows, cracking stucco and scarved grandmothers has been tranquil. Neverson said there have been no clashes between ethnic Albanians and Serbs. People seemed to welcome the medics.

The military team would also visit two other villages between Monday and Tuesday.

Capt. Brian Robertson, a U.S. pediatrician, and Godin said they had worked in clinics in such places as Honduras and Haiti.

Tomislav Redzic, a Serbian doctor specializing in internal medicine, whirled about in white lab coat and dark glasses. Redzic said the most valuable part of the day was interacting with other doctors.

For him, the military&#8217;s presence had grown normal, but dealing with ethnic Albanians was new.

He said he didn&#8217;t see any problems between the factions that day. He just saw people who needed help. There was no reluctance to accept care &#8212; or give it.