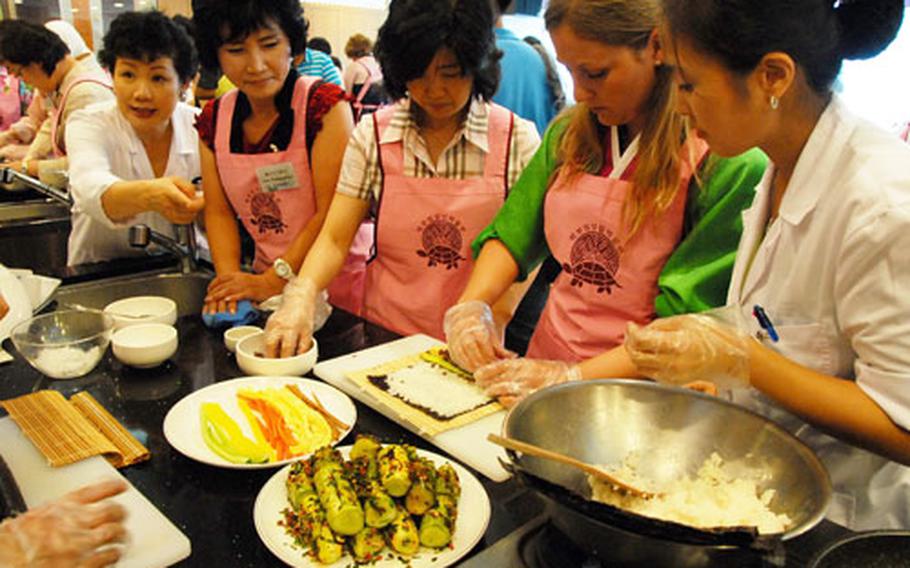 SEOUL &#8212; Kristi Finn chased the narrow strands of carrots around her frying pan with a pair of wooden cooking chopsticks and struggled to lift them one by one onto a plate.

Finn was one of 25 women &#8212; 11 Americans and 14 South Koreans, mostly wives of senior military officers &#8212; who attended a Korean cooking class Thursday at the Institute of Traditional Korean Food. The class was sponsored by the Korea-America Good Neighbor Society.

For some, the hardest part wasn&#8217;t the cooking. It was cutting, dicing and mixing the food under the lens of a half-dozen photographers and reporters who also showed up.

Cooking instructor Lee Jung-hee said the American women struggled most with chopping vegetables to the right thickness &#8212; fat chunks of cucumbers and finely minced leeks for kimchi, and slivers of carrots and cucumbers for kimbap-style rice-and-seaweed rolls.

At one cooking station, she pointed to a slender wedge of cucumber and told the American "chef" to chop it into thirds, leaving each slice no more than a centimeter thick.

She said the Americans seemed to like making kimbap the most.

Vicki Porter, assistant station manager for the American Red Cross at U.S. Army Garrison-Yongsan, said she and the Korean women at her cooking station communicated largely through gestures.

"The cultural interaction to me is very special. It creates a bond, and it makes everybody more comfortable," she said.