Koreans know a few GIs who speak their language 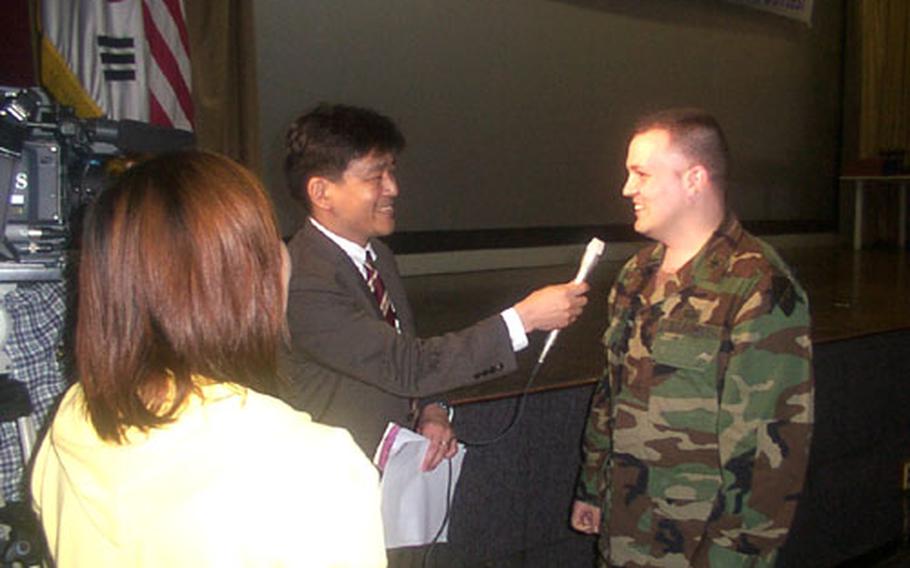 The tune, a popular drinking song with older Koreans in singing parlors, helped earn Blair first place in the 8th annual Korean Language Contest. He was among 14 U.S. soldiers showing off their linguistic chops at the event.

Proficiency ranged from novice to fluent, a fact that impressed hundreds of South Korean soldiers assigned to the U.S. Army units in attendance. Blair&#8217;s finish was almost a no-brainer considering his animated, lively presentation and nearly nine years of Korean language skills.

Blair thought he was supposed to give a speech appealing to senior South Korean officers. But at the last minute organizers told him contestants would be judged on humor and audience response.

He scratched his speech, grabbed the microphone and told two humorous stories of life in South Korea; a language mix-up with a taxi driver and a misinterpretation of a South Korean grandmother&#8217;s kindness.

Last year Blair lost the contest to another soldier whose skills were just as good while twirling a baton, he said.

Korean isn&#8217;t easy to conquer. While fairly simple to read, grammar is brutal: verbs end sentences, and modifier and subject placement is quite different than in English. Good pronunciation requires practice, patience and a careful finesse &#8212; lest phrases become a garbled vocal soup.

His South Korean friends tweaked his speech after many corrections.

The 30-year-old saxophonist with the 2nd Infantry Division band has had no formal Korean language classes and studies on his own. O&#8217;Brien said he can follow about 40 percent to 50 percent of casual Korean speech.

Koreans are flattered when foreigners use their language, O&#8217;Brien said.