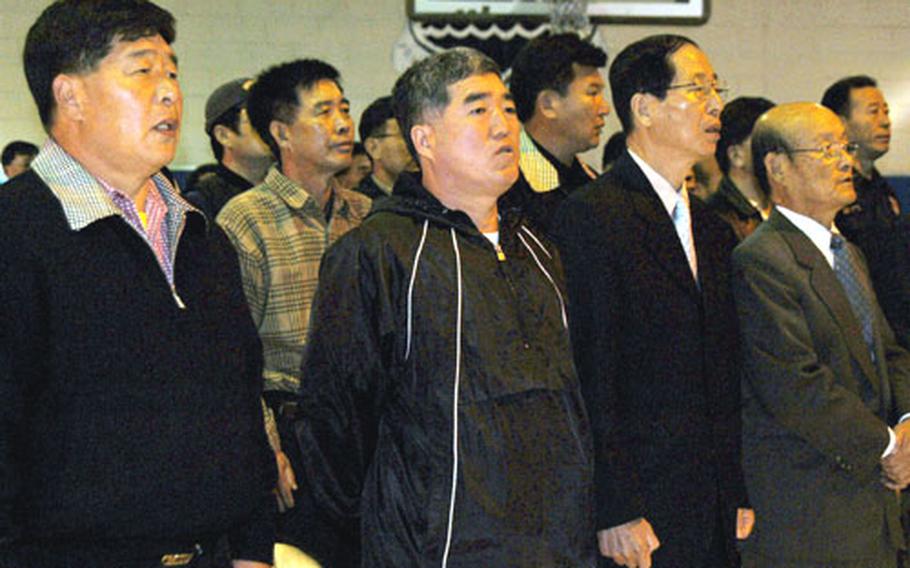 South Koreans who lost their jobs when Camp Colbern closed sing their national anthem Wednesday during a ceremony at Colbern recognizing their years of service. The camp closed in October, and the U.S. soldiers there moved to Camp Stanley near Uijeongbu, South Korea. (Teri Weaver / S&S)

South Koreans who lost their jobs when Camp Colbern closed sing their national anthem Wednesday during a ceremony at Colbern recognizing their years of service. The camp closed in October, and the U.S. soldiers there moved to Camp Stanley near Uijeongbu, South Korea. (Teri Weaver / S&S) 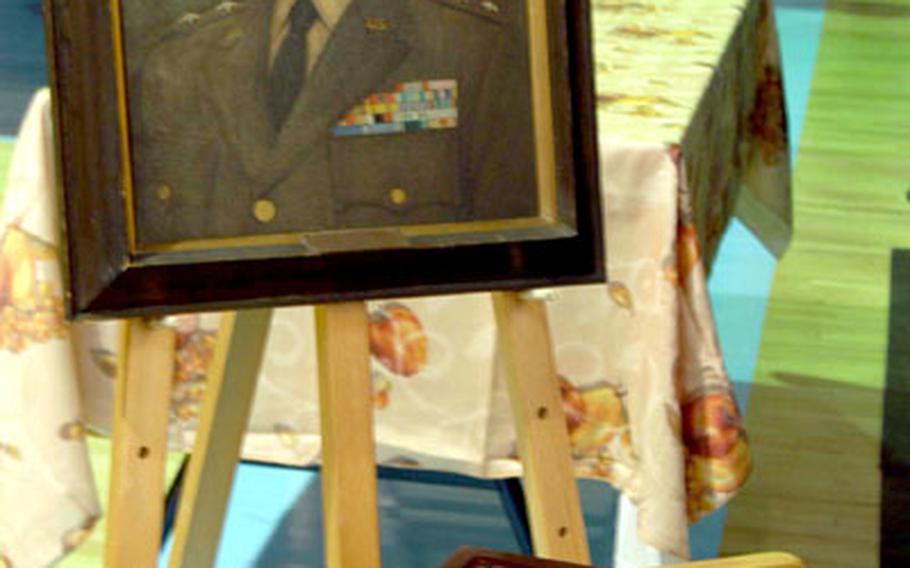 Camp Colbern was named after Maj. Gen. William H. Colbern, who servied during both World Wars and the Korean War. The encased flag from the camp will be sent to his great-grandson, who is a colonel in the U.S. Army. (Teri Weaver / S&S)

CAMP COLBERN, South Korea &#8212; O Kyong-kun thought this U.S. Army base about 20 miles outside of Seoul would be his workplace for life.

It was, for 19 years. But now O, and about 70 Korean workers like him, must move to another military base, retire or look for new jobs, the maintenance mechanic said Wednesday.

From 60 to 70 workers have scattered across South Korea seeking new jobs, O said Wednesday morning through a translator. &#8220;Some of them got laid-off.&#8221;

O, who is 55, and some of his fellow workers gathered at Colbern to accept U.S. military certificates of appreciation for their service. The camp, in Hanam City, closed to U.S. soldiers at the end of October after 41 years.

The closure is part of the military&#8217;s overall changes on the peninsula. Many smaller bases like Colbern are closing in anticipation of moving most of the U.S. forces here to a more centralized area of South Korea.

Colbern&#8217;s soldiers were members of the 304th Signal Battalion, 1st Signal Brigade. They have relocated to Camp Stanley, according to the battalion commander, Lt. Col. Anthony Beck.

During Wednesday&#8217;s ceremony, Beck talked about the South Korean workers like O who kept the fire trucks running, cut soldiers&#8217; hair and served them food at the dining facility. &#8220;It is comforting to know that you considered us friends as we made Colbern our home,&#8221; he said.

Chu Tok-chae, 64, was a Korean soldier who once served with the United States, then began working at Colbern as a firefighter. After 39 years, he was department manager.

Hanam City&#8217;s mayor, Lee Gyo-bum, also said he was sad the camp had closed. During the ceremony, he thanked the 304th Battalion for its contributions throughout the last three decades with English-language classes, Arbor Day tree planting and cleaning up parts of the community.

&#8220;As the mayor of Hanam City, I hope all of the American soldiers enjoyed the beautiful nature of Korea and felt the generous hospitality of the Korean people during their service here in Hanam City,&#8221; he said.

Wednesday&#8217;s ceremony was in the camp gym. O said one of the last ceremonies he attended there was a funeral service for a U.S. soldier who had died in a vehicle accident.