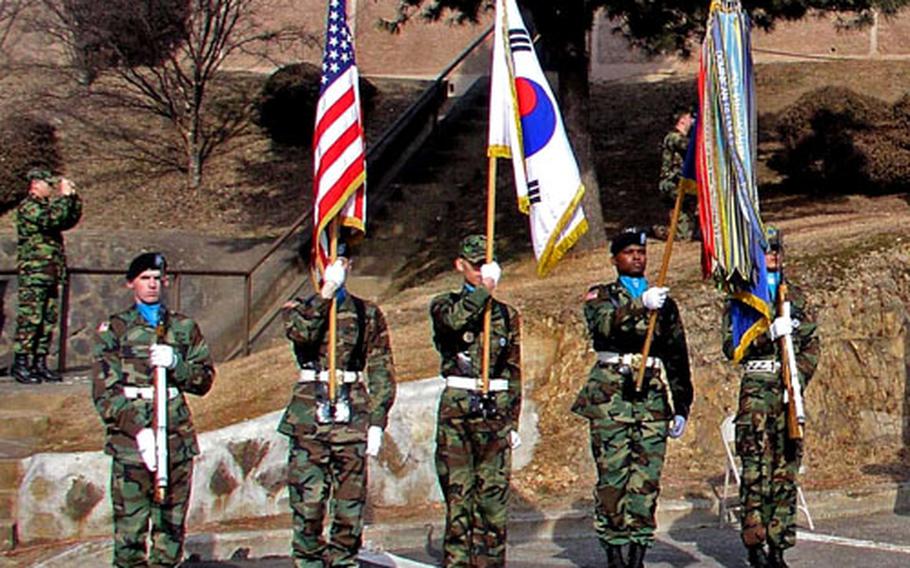 A color guard stands at attention during a ceremony Friday at Osan Air Base to commemorate a fierce Korean War engagement in February 1951 known as the battle of "Bayonet Hill." (Franklin Fisher / S&S)

OSAN AIR BASE, South Korea &#8212; A hard-fought Korean War infantry action best remembered for a frenzied bayonet charge was commemorated here Friday in a quiet ceremony on the hill where the battle raged five decades ago.

The battle is dear to the hearts of the U.S. Army in South Korea and to the Veterans of Foreign Wars, who each year hold a ceremony at the hill and recount the ferocious fighting that took place there.

The battle saw infantrymen of Company E, 27th Infantry Regiment, 25th Infantry Division, in action against Chinese infantry dug in on a knoll with three small knobs. It was marked on military maps as Hill 180, for its height in meters.

Commanding Easy Company was Capt. Lewis Millett. Millett had served in World War II, where in Europe he earned the Silver Star, Bronze Star, Purple Heart and a battlefield commission.

In the closing weeks of 1950, a massive intervention by Chinese forces had thrown American and South Korean forces into retreat.

By January, though, Lt. Gen. Matthew B. Ridgway, commanding 8th U.S. Army, had moved to regain the offensive, and began probing north.

Ridgway ordered the 27th Infantry, known as the &#8220;Wolfhounds,&#8221; north as the vanguard for what was to be a full-scale assault called Operation Thunderbolt.

At midday on Feb. 7, Company E was approaching Hill 180 when one of Millett&#8217;s men spotted Chinese troops moving near the hilltop. The Chinese soon opened fire and several Americans were cut down in a hail of machine-gun fire.

Millett wanted to close with the Chinese quickly.

&#8220;Lunging into the first line of enemy foxholes, the GIs ripped into the Chinese, bayonets first,&#8221; according to the account, which was narrated Friday by Sgt. Maj. Brian Lawson of the Army&#8217;s 3rd Battlefield Coordination Detachment, based at Osan.

The unit co-hosted the ceremony with VFW Post 10216 of Songtan, the district of Pyongtaek in which Osan Air Base is located. The 51st Fighter Wing, headquartered here, sponsored the ceremony.

Millett and his troops pressed forward, throwing grenades into bunkers and foxholes, firing from the hip, and lunging at Chinese troops with bayonet thrusts.

Once at the crest, Millett pumped his rifle up and down to signal that the hill was taken.

After the battle, on the forward slope, 47 Chinese lay dead, 30 of bayonet wounds. Another 50 dead enemy lay on the reverse slope, killed by bayonet or gunshot wounds.

Another 100 Chinese are estimated to have escaped, according to the Army&#8217;s account.

Nine members of Company E were killed in the engagement.

Millett spent several months in the hospital under treatment for his wounds. President Harry S. Truman presented Millett with the Medal of Honor in a ceremony at the White House on July 5, 1951.

Osan Air Base was constructed months later, in July 1951.

&#8220;On this day we are assembled once again to express our gratitude and reverence,&#8221; Dave Teets, senior vice commander for the VFW&#8217;s Department of Pacific Areas, told the audience, which included U.S. Army soldiers drawn up in formation as well as VFW members and military brass, including two U.S. Air Force generals.

&#8220;Our presence solemnly commemorates those veterans who fought and died on this hill, an expression of our gratitude and tribute for their courage, daring and heroism,&#8221; Teets said.

Teets&#8217; remarks were followed by the laying of four floral wreaths at the foot of a small monument to the battle. Army Apache helicopters made a ceremonial flyover during the ceremony.