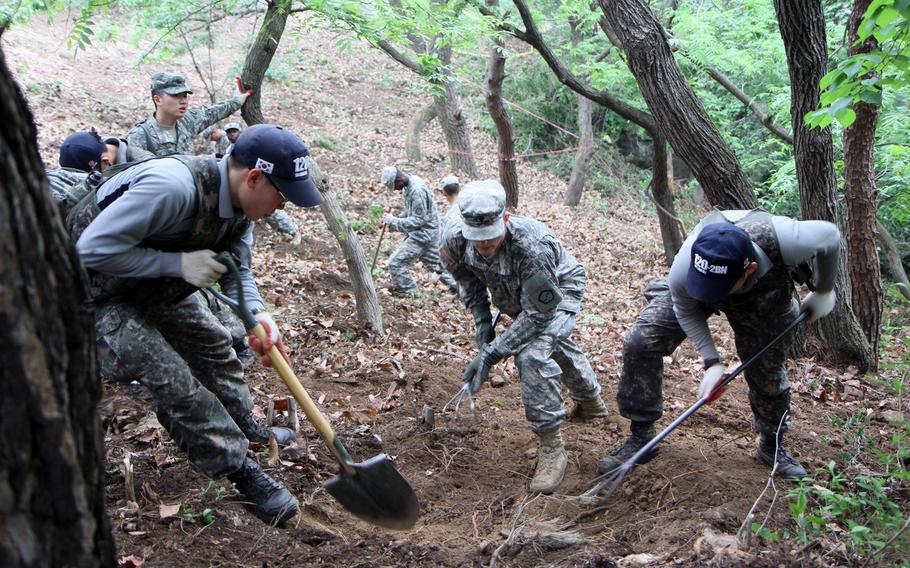 U.S. Army soldiers from the 501st Sustainment Brigade and 6th Ordinance Battalion search for remains with the Chilgok Battalion, ROKA 50th Infantry Division at Hill 487, in Chilgok, South Korea, May 14, 2014. The area was a fierce battlefield during the Korean War. (Joel Changhoon Lee/U.S. Army)

The three remaining Korean War veterans in Congress introduced a resolution Friday calling on the U.S. to resume talks with North Korea to account for the thousands of American servicemembers still missing from the conflict.

Representatives Charles B. Rangel (D-N.Y.), John Conyers, Jr. (D-Mich.), and Sam Johnson (R-Tex.) introduced House Resolution 799 to coincide with the 66th anniversary of the start of the Korean War on June 25, 1950, which ended in armistice in July 1953.

Joint U.S.-North Korea teams have recovered and returned the remains of thousands of Americans between 1954 and 2005, according to a statement issued by the three lawmakers. But roughly 5,300 of the 8,000 Korean War MIAs are believed to be in North Korea, the statement said.

The Pentagon began formal recovery missions in North Korea in 1996, suspending them from October 2002 to June 2003 after learning that the country had been secretly running a nuclear weapons program. It was suspended again in 2005 because of the country’s work on nuclear weapons and intercontinental missiles.

The two countries began talks in 2011 to restart recovery missions, but that effort fell apart in 2012 when North Korea launched a ballistic missile, breaching a United Nations sanction.

Tensions have only grown worse the past year between the United States and North Korea — along with many of its neighbors, particularly South Korea and Japan — as the renegade nation has conducted a nuclear test and a bevy of missile tests.

The lawmakers are asking the United States to separate those issues from that of recovering the war dead.

“This resolution would ensure that the heroic service members of the Korean War are identified and brought back to their loved ones in the United States, where they belong,” Rangel said in the statement.

“We have a responsibility to our veterans to make sure we do not forget their sacrifices made to defend the freedoms we enjoy. Their families deserve peace.”

Johnson, a 29-year Air Force veteran who flew combat missions in both the Korean and Vietnam wars — he spent seven years as a POW during the latter conflict — added: “We owe our fallen brothers in arms every last effort to provide a proper and dignified return to home.”

Conyers said it is “simply unacceptable” that so many MIAs remain unaccounted for so many decades after the war.

The statement said North Korea reported uncovering remains of American MIAs as recently as this year, but “the fate of these remains is unknown due to construction and development.”

Rick Downes, president of the Coalition of Families of Korean & Cold War POW/MIAs, whose own father went missing during the war in 1952, said in the statement that the many missing Americans “is a wound that never healed.”

“The path to finding that closure will open only when North Korean and U.S. leaders decide to pursue this humanitarian mission other than their political differences,” Downes said. “It can be done. It has been done. It is time to do so again.”