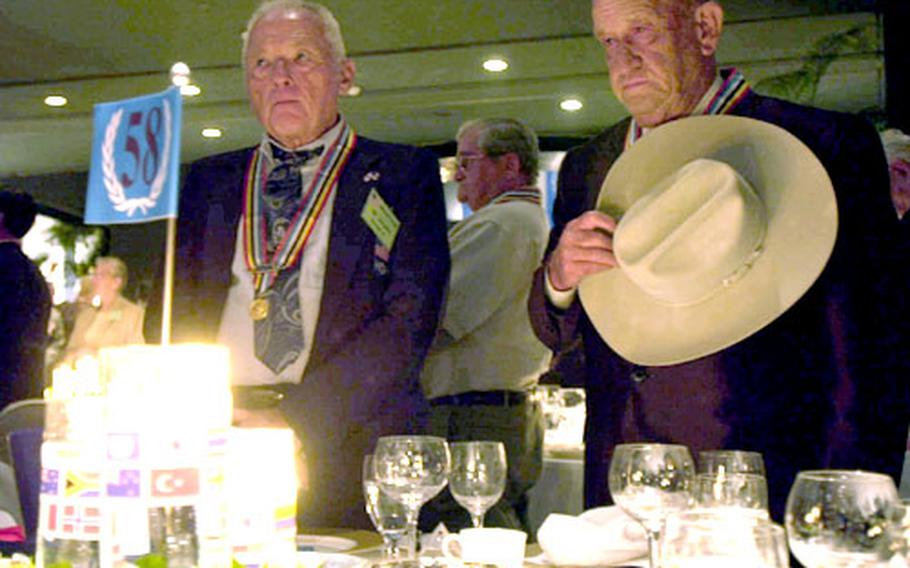 Korean War veterans Ronald W. Schaller, of Plainfield, Ill., and Mark Watson, of Manning, La., during a moment of prayer for soldiers who died during the Korean War. About 800 veterans from 22 nations gathered at the Hyatt Hotel Friday night for the USO&#39;s "Salute to Heroes." (Jeremy Kirk / S&S)

SEOUL &#8212; They came from around the world, humble men who fought on desolate hillsides in Korea, a country at its deepest low during a three-year civil war.

For many Korean War veterans Friday night, it was their first trip back since they left 50 years ago. The USO&#8217;s &#8220;Salute to Heroes&#8221; at the Hyatt Hotel honored veterans from 21 countries who either fought or participated in the devastating conflict.

Veterans hardly view themselves as heroes. They saw themselves as young and relatively fearless, some of whom were drafted, some who volunteered, but all determined to take their orders and execute them tenaciously.

Mark Watson, a 70-year-old Stetson-wearing Southerner from Manning, La., spent two years in a North Korean prison camp on China&#8217;s border. Although about half of the American prisoners of war died in captivity, he was determined to make it.

There was no other choice.

After his release in 1953, he spent seven years in hospitals recovering from both mental and physical injuries.

Watson said his trip to Korea is an affirmation of the sacrifice he and others made: &#8220;I have no regrets. I really don&#8217;t. I look at these Koreans and I can see what they have done with the seeds that we have sown back then. It just makes me feel proud to have been a small part in bringing about what they have.&#8221;

Henry Kissinger, former secretary of state under President Nixon, told veterans they stopped the advance of communism on the peninsula and contributed to its disintegration in Europe.

&#8220;As an American, I am very proud of the role Americans have played,&#8221; Kissinger said. &#8220;But in addition, all of us who have seen what happened in Korea know that however significant our contribution, it could not have achieved the objectives without the heroism, the suffering and the dedication of the Korean people.&#8221;

Gary O&#8217;Dell of Middleburg, Ind., signed up for a free trip offered in a veterans magazine sponsored by the Federation of Korean Industries. When he found out through the mail he could return for the armistice commemoration, he said he was so excited he couldn&#8217;t eat lunch.

O&#8217;Dell, 69, was a howitzer gunner with the 1st Marine Division, spending time in Munsan and Kimpo near Seoul, firing in support of friendly forces.

He was 19 at the time, and felt distant from danger.

When he first arrived in Korea, O&#8217;Dell said, he was immediately struck by the smell. At the time, rice paddies were fertilized by human waste. &#8220;We just knew there was no way they could keep us here because we couldn&#8217;t stand that smell,&#8221; he said.

When the Korean War ended with the signing of the armistice agreement 50 years ago Sunday, the lines of division had hardly moved. Both the North Koreans and Chinese, in addition to U.N. forces, made significant gains only to lose them.

That final chapter doesn&#8217;t sit too well with some veterans.

Don Fontana came to Korea when he was 18 and in the 1st Marine Division. &#8220;I volunteered to go. I knew the president and our country was concerned that if South Korea failed, then you put in harm&#8217;s way Japan, Indonesia, the Philippines. We&#8217;re from a generation of soldiers that fought in World War II, so it was my duty to enlist.&#8221;

He was involved in a campaign just after the 1st Marine Division had to withdraw from the Chosin Reservoir deep into North Korea. He later fought near Panmunjom, and remembers seeing U.N. jeeps &#8212; along with Chinese and North Koreans &#8212; driving to armistice negotiations there in the spring of 1952.

When he saw Koreans welcoming him and other veterans at the airport, the emotions resurfaced. Fontana was glad to get home after the war, but the armistice agreement left him feeling a little empty.