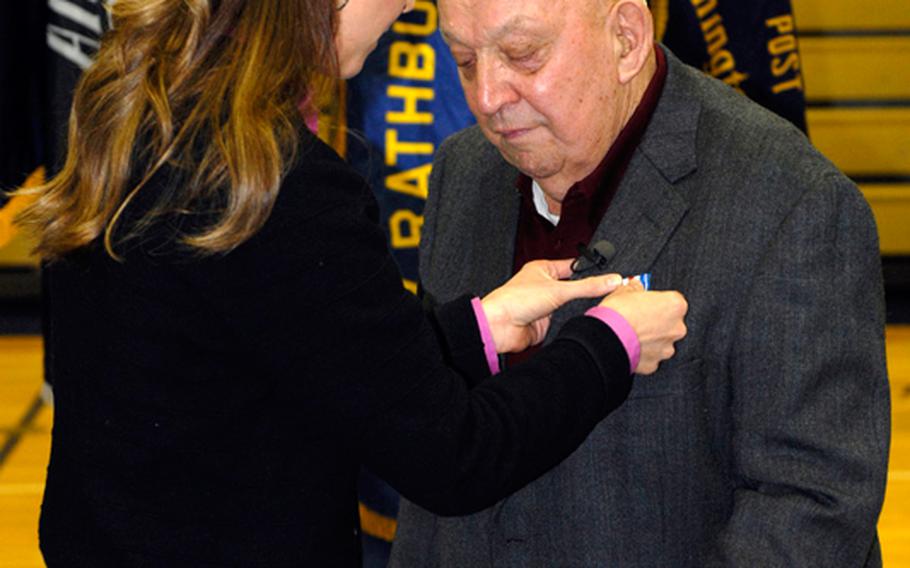 Bill Wuorinen, 82, of Naselle, Wash., receives his Silver Star for gallantry in the Korean War on Jan. 30, 2013. (Von Rogatsz/Courtesy of the 2nd Infantry Division)

SEOUL — Thanks in part to a group of high school students, a Korean War veteran has been awarded the Silver Star almost 60 years after he risked his life to save a wounded officer during one of the fiercest battles of the conflict.

Bill Wuorinen, 82, of Naselle, Wash., was given the medal Wednesday at a ceremony held in a school near his home attended by hundreds of area residents and dignitaries.

Officials blamed a “paperwork error” for the time it took for Wuorinen’s “gallantry in action” on March 17, 1953, to be recognized. That mistake was corrected after a class at a local school researched his actions and championed his cause.

During an effort to drive Chinese forces from a hill near Un-Dong, North Korea, Wuorinen’s unit came under intense attack from hostile forces. At one point, he and another soldier dragged a wounded lieutenant colonel to cover, then provided first aid to stabilize his condition. The two then held off Chinese soldiers until reinforcements and medical personnel arrived.

In describing the battle, the Army’s official history of the Korean War notes, “The enemy breached the wire entanglements and pushed through the mine fields into the trenches of the 9th Infantry Regiment. One platoon’s position was overrun but the remaining platoons held firm in their blocking positions until reinforcements arrived.

“As the Chinese began to disengage, (2ID) artillery fire interdicted their route of withdrawal,” it said. “The action cost the 9th slightly over 100 casualties, but enemy losses were estimated at over 400 men.”

According to a report in The Daily News of Longview, Wash., the lieutenant colonel and the other soldier who aided in his rescue received Silver Stars, but Wuorinen was mistakenly listed as a medic and was therefore ineligible for third-highest military decoration for valor.

Two years ago, the newspaper reported, a class at Naselle High School took up the cause of righting the mistake. Eventually, the local American Legion Post and government officials got involved.

While the oversight has long been a source of frustration, Wuorinen told the newspaper he was happy to finally be recognized.