Korean War rail relic hauled from DMZ to get refurbished 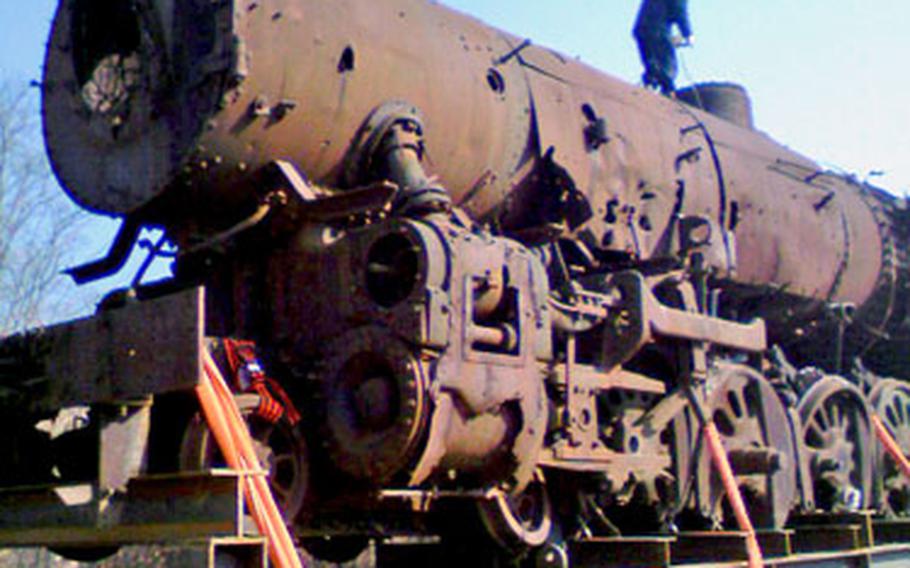 A rusty locomotive that once pulled cars from Seoul to the Chinese border gets transported out of the Demilitarized Zone, where it has remained stationary for almost 56 years. (Erik Slavin / S&S)

DEMILITARIZED ZONE, Korea &#8212; Han Jun-gi last operated the hulking, rusted locomotive sitting before him on Monday as a crewman on the Kyongui line in 1950. The engine hauled railcars from Seoul to Sinuiju, not far from what was the Korea-China border.

On June 25, 1950, the locomotive became the unofficial property of North Korea when an estimated 135,000 troops swarmed south, beginning the Korean War.

It briefly fell back into allied hands before finding its resting place on tracks inside the demilitarized zone, where it has stood still for almost 56 years.

On Monday, a crane lifted the locomotive on to a flatbed truck and took it to Imjingak, where it will be spruced up in accordance with its standing as a South Korean national cultural property.

Workers will spend up to two years preserving what is left of the train, but they will not be restoring it to its original condition.

To do that they would probably have to replace most of the original material, which is heavily corroded after 56 winters of inactivity.

&#8220;We will use chemical techniques to maintain the locomotive as it is, to slow down corrosion,&#8221; said Jeong-seok, Cultural Heritage Administration spokesman. &#8220;This will preserve it for the next generation to see.&#8221;

The locomotive will be treated in a public glass enclosure at Imjingak, the Imjin River train station that now serves as a tourist park. Imjingak is only about a mile from the restricted access Tong-il &#8220;Unification&#8221; Bridge, which leads to Camp Bonifas and the United Nations Joint Security Agency.

The locomotive will then be returned to the DMZ, one bridge away from the final South Korean checkpoint and one mile from the military demarcation line that separates the two Koreas.

No decision has been made yet whether to return it in the glass enclosure, or to move only the locomotive, Jeong said.

The U.N. Military Armistice Commission oversaw the locomotive&#8217;s transfer out of the DMZ on Monday. The group, known by the U.S. military as UNCMAC, generally includes about 15 U.S. servicemembers who serve alongside other allied-nation servicemembers. As a part of UNCMAC, they do not carry weapons.