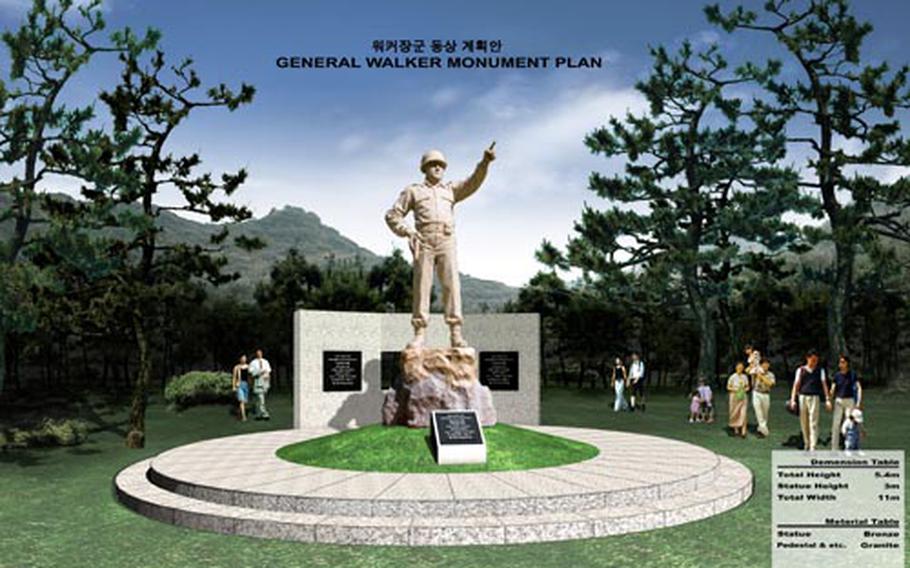 SEOUL &#8212; After being turned away by one of its own cities, a South Korean civic group has finally found a home for a monument to the American general it credits with saving the country &#8212; on an American military base few South Koreans are allowed to enter.

The Korea America Friendship Association, or KAFA, plans to unveil a $770,000 statue of Lt. Gen. Walton Walker at U.S. Army Garrison-Yongsan on Dec. 23, the 58th anniversary of the general&#8217;s death in a jeep accident near Uijeongbu. Walker successfully led the defense of a critical line around Busan, the only pocket of South Korea not captured by communist North Korea in the early months of the Korean War.

Seo Jin-seop, the president of KAFA, said Walker deserves a monument because he turned the war around.

"This general is the real hero, and he made the greatest contributions to winning the war, much greater than Gen. MacArthur," he said.

Eighth Army officials couldn&#8217;t confirm by Saturday if and when the statue would be erected at Yongsan.

A luxury hotel here was named after the general, but there are no major monuments to him in South Korea.

KAFA asked Busan&#8217;s United Nations Memorial Cemetery in 2005 if it could put a statue of Walker there. Some of the 11 countries whose soldiers are buried there said no, because the statue wouldn&#8217;t represent the United Nations.

"He is just a symbol of the U.S.," said cemetery spokeswoman Park Eun-jung.

The association then asked the city of Daegu &#8212; home to the U.S. military&#8217;s Camps Henry and Camp Walker, named after the general &#8212; if it could erect the statue there. KAFA made its request during election season and during a period of elevated anti-Americanism, following the deaths of two South Korean schoolgirls killed by a military vehicle driven by U.S. soldiers three years earlier. City officials said they would review the plan after election, but civic groups protested, and the new mayor rejected it. A Daegu city spokesman said Friday he was unable to comment on the matter.

Earlier this year, former U.S. Forces Korea commander Gen. B.B. Bell agreed to let the group put the statue at Yongsan, Seo said. The base is scheduled to return to South Korean control in 2012, and the area where the statue will be erected will be open to the public, Seo said.

A similar statute of MacArthur was erected at the Incheon Landing site in the late 1950s and was the subject of large-scale protests in 2005 by civic groups who wanted to tear it down.

Seo said he was disappointed that some South Koreans don&#8217;t want the country to have a monument to Walker, and that some believe the war started with South Korea invading the north.

He says it&#8217;s pointless to try to convince them that putting up the statue is the right thing to do.