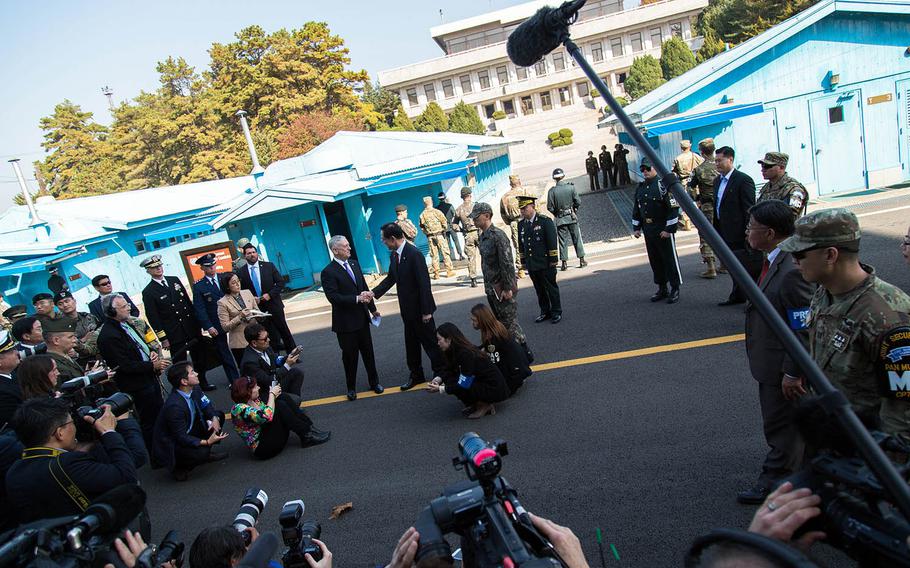 SEOUL, South Korea — The Korean truce village in the heavily fortified border area that divides the peninsula is a likely venue for the planned summit between President Donald Trump and North Korean leader Kim Jong Un.

But other locations are being considered, including Switzerland, Sweden or even South Korea’s Jeju Island, South Korean officials said on Sunday.

Trump said he accepted Kim’s invitation to meet as soon as possible, but the White House has not named the time or place. South Korean officials who engaged in shuttle diplomacy last week between Pyongyang and Washington said Trump had agreed to hold the summit by May.

Kim also plans to meet with South Korean President Moon Jae-in in late April in Panmunjom as the Joint Security Area in the Demilitarized Zone is called.

The area, with its trademark blue conference buildings, has been the past site of talks, most recently between negotiators discussing the North’s participation in the Olympics.

That was followed by the remarkable sight of senior North Korean officials walking across the so-called demarcation line that separates the two sides.

The development also came just months after a North Korean soldier raced across the line under a hail of gunfire from his former colleagues as he defected to South Korea.

It would be the first-of-its kind summit. No North Korean leader has met with a sitting U.S. president, although it has long been the North’s goal to do so. Organizers will face a logistical nightmare with security concerns in addition to political optics.

“Places like Switzerland, Sweden or Jeju Island have been gaining a lot of attention (as possible venues for the meeting), but we also view the JSA as a serious option,” an official from South Korea’s presidential office was quoted as saying by the Yonhap News Agency.

The official, who spoke to reporters on condition of anonymity, said a U.S.-North Korean summit at Panmunjom “would hold the significant meaning of turning a symbol of division into one of peace.”

But the official said the location would have to be further discussed with Washington and Pyongyang considering various factors, including security.

The presidential office later confirmed those locations had been mentioned as possibilities.

Kim is not known to have left the country since he assumed power after his father died of a heart attack in 2011. But he studied in Switzerland in his younger years.

The Swiss Foreign Ministry said it has offered to host talks and is in contact with all parties involved.

Alain Berset, who holds the rotating Swiss presidency, highlighted the importance of dialogue when he met with North Korean representatives during his trip to the Winter Olympics last month, Swiss media reported.