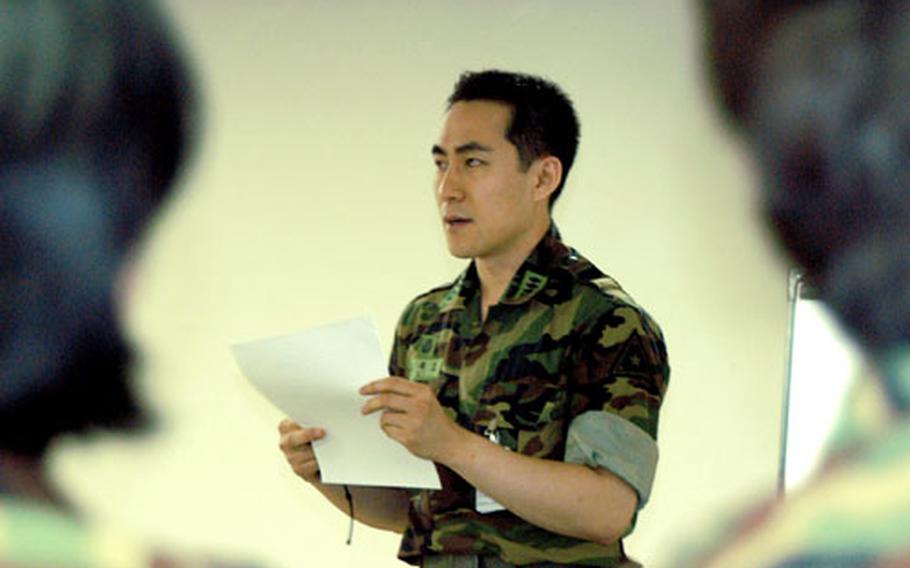 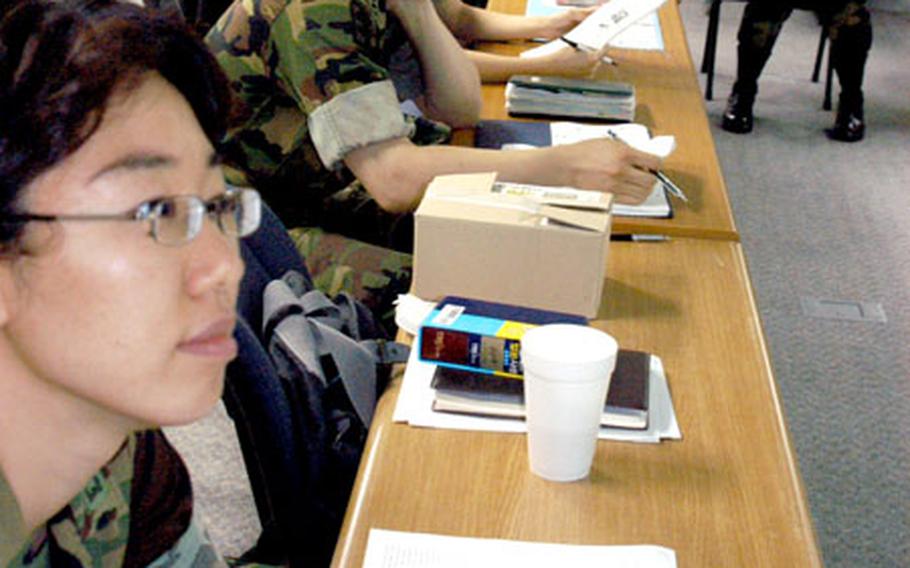 Program participants listen to a lecture presented by one of their peers. At right is Capt. Judy Elsbury, the clinical education division chief for the hospital. (Juliana Gittler / S&S)

YONGSAN GARRISON, South Korea &#8212; If war breaks out on the peninsula, it will take soldiers such as Maj. Kim Kyeong to ensure the wounded can be treated with ease.

The South Korean Army officer this month finishes a six-month training program at the U.S. Army&#8217;s 121st General Hospital, during which she and five fellow officers will have been shown the U.S. military medical system&#8217;s inner workings.

It&#8217;s an important program with a lengthy name: The Integrated Service of (Republic of Korea) Military Health Care Personnel Program.

&#8220;This program is greatly helpful to get the necessary skills to work with the U.S. troops in time of war,&#8221; Kim said. &#8220;I am really hoping that more ROK military health care soldiers will be assigned to this U.S. medical unit so they [can learn] to cooperate, communicate and understand each other.&#8221;

The program also provides more immediate results. It teaches the South Koreans about U.S. approaches to medicine and hospital administration and introduces Americans to South Korea.

&#8220;The big thing for me is you learn about the culture and the people,&#8221; said Lt. Col. John Beilman, chief of clinical education for the 18th Medical Command, which oversees the hospital.

The South Korean government screens and selects the participants, about a dozen a year, from any branch of service and most medical backgrounds, including administration and logistics.

They spend the six months working in their job areas and rotate through other relevant departments. They also visit other installations, do field work off post and tour the Demilitarized Zone, Elsbury said.

Participants do almost the same jobs as their U.S. counterparts. Nurses work directly with patients at the hospital, for example, although there are some legal restrictions. For instance, they cannot administer medication to patients, Elsbury added.

The South Korean officers participate in continuing education classes and health fairs on base. They also spend the entire time speaking English and interact with Americans socially.

South Korean Capt. U Se-jo, who worked with the medical service corps, has hoped to take part in the program since hearing about it in 1999, he said.

&#8220;I&#8217;ve never been abroad, so personally it is great first-hand experience for me to get exposed to the American culture, especially the U.S. military system,&#8221; he said. &#8220;This program permits two nations to share the strengths of its military systems with each other.&#8221;

After the training, the participants return to their commands and present a detailed report on their experiences. U will return to the ROK Army as an instructor. He said he hopes to pass on the skills learned in the program.

The idea, Beilman said, is not to change or influence the Korean approach to military medicine or health care &#8220;but to show them how we do things. If that invokes change, it comes from within.&#8221;