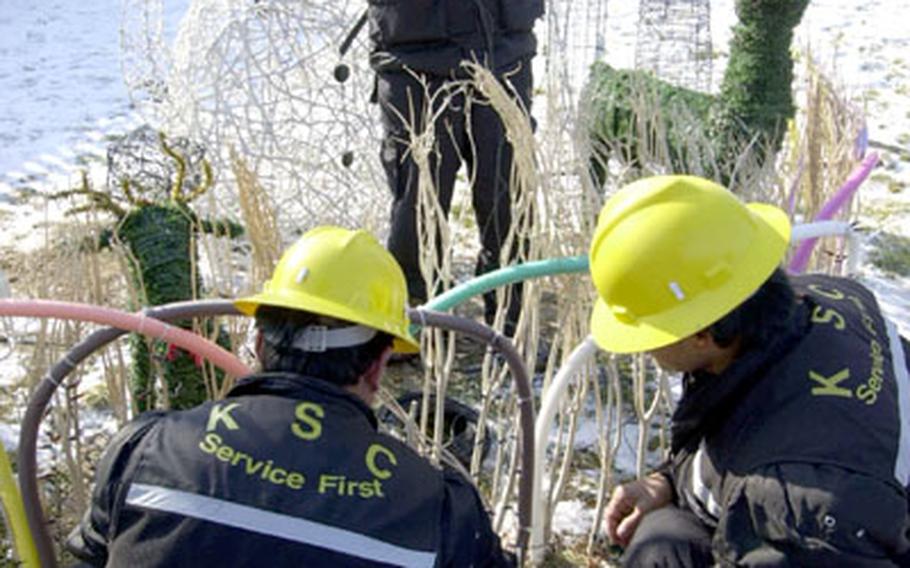 YONGSAN GARRISON, South Korea &#8212; When the switch was flipped and the holiday lights came on at the &#8220;Winter Wonderland&#8221; decorations ceremony a year ago, An Chin-u choked up, with tears in his eyes.

He wasn&#8217;t overwhelmed with holiday cheer; he just was glad the project was completed on deadline.

An, a member of the 19th Korean Service Corps, was in charge of a KSC mobile labor force that had just two weeks to install the thousands of lights and decorations that lined 8th Army Boulevard that season. It was the first year the Corps attempted the job, usually completed by contractors.

An, joined by 19th KSC commander Han Kwang-man, said this week they learned a lot while rushing through the 2004 job. With the right planning, Han said, his people could spend less to produce a better display in 2005.

And that they did.

An said most of this year&#8217;s cost savings came from not having people work costly overtime hours to rush through the job.

Planning began in August and the first decorations started going up on Nov. 1. When the final string of lights was plugged in at Yongsan Garrison on Wednesday, the 24 members of the mobile labor force had connected 6,900 strings of lights, 3,800 yards of &#8216;rope lights&#8217; used to construct glowing objects like trees and reindeer and too many Santa and reindeer statues to count.

Area II Morale, Welfare and Recreation officials fund the project and purchase all the decorations, Han said. His work force provides the manpower to install, maintain and remove the displays. The lights will be turned on daily from the opening ceremony Thursday through Jan. 3, from 5 to 10 p.m. daily. His crew will work from Jan. 6 to Feb. 6 to remove the decorations.

Han said the goal, as directed by Korean Service Corps Battalion commander Lt. Col. Robert J. Paquin, was to bring a feel of &#8220;home&#8221; to the Yongsan Community through the project.

He said the mobile labor force worked through tough conditions, including bitterly cold days, to ensure everything would be prepared for the ceremony.

Shortly after flipping the switch to light the decorations Thursday night, Area II commander Col. Ronald Stephens said he was impressed with the work.

Han said not many community members know about the KSC. It&#8217;s a paramilitary group that provides the U.S. 8th Army logistical support during peacetime. But during war, the group would draw on its reserves and fan across the peninsula to help build infrastructure, maintain weapons supplies and transport supplies for U.S. troops.