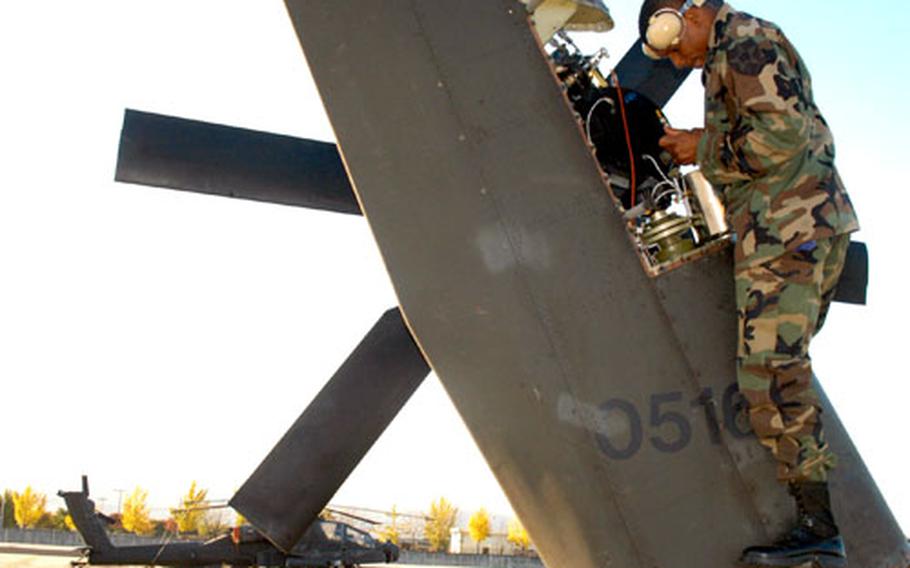 The base, it&#8217;s major feature an airstrip built after Chunchon was recaptured from communist forces in March 1951, is due to close by the end of next month, officials have said. The U.S. 8th Army announced this week that one of the Camp Page units, the 542nd Medical Evacuation Company, including about 120 soldiers and their equipment, will move to Fort Campbell, Ky., by April.

Another Camp Page unit, the 1st Battalion, 2nd Aviation Regiment, will move to Camp Eagle, near the South Korean city of Wonju, about an hour&#8217;s drive south of Chunchon, according to an 8th Army statement.

&#8220;This is the first time I am aware of where a city or province had taken the time and resources to do a farewell ceremony for every soldier and civilian. This was not something they had to do but they wanted to say farewell in the appropriate way,&#8221; he said.

U.S. Forces Korea Korean Employees Union Kangwon chapter representative Yi Un-song said the ceremony was nice, but that it was not a good feeling to see the city spend $30,000 on a party when it had done nothing to help South Korean employees losing their jobs at the base.

Only 80 out of about 270 Camp Page South Korean base workers have had job offers from USFK so far, and all those offered jobs will have to relocate, he said.

Kim Yong-bak, a chief of the planning section for Chunchon City Hall, confirmed the cost of the ceremony but said it is not the city&#8217;s responsibility to help laid-off base workers.

Most Chunchon locals will miss Camp Page, which contributed greatly to postwar restoration in Chunchon during the 1950s and 1960s, Kim said.

&#8220;Since then, Camp Page has played an important role defending our region against the threats of North Korea that is so close to us in Kangwon province (which borders the demilitarized zone separating the two Koreas). That is a big reason why we feel friendly about the U.S. troops here,&#8221; he said.

The city is preparing a plan for the land where Camp Page is located that might include a park, apartments or a shopping mall and is negotiating with the South Korean government over purchase or lease of the land, he said.

People living near the base, some of whom have filed a lawsuit seeking damages for severe noise from U.S. aircraft, will be happy about the base closure. So will landlords who have faced height restrictions on buildings near the base, he said.