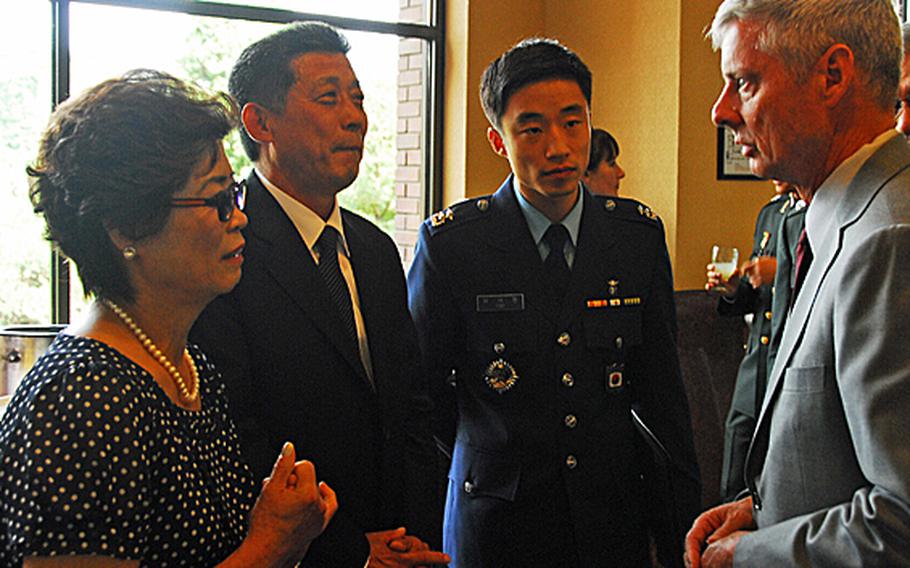 SEOUL &mdash; Kim Je Kwon remembers huddling with her family inside a dark tunnel in war-ridden Korea more than six decades ago and crying as her father left.

Little did the four-year-old know that would be the last time she would see him.

Her father, engineer Kim Jae Hyun, was killed soon afterward as he drove a train through enemy lines to Daejeon, approximately 65 miles south of Seoul, in an attempt to rescue U.S. troops, including their commander, Maj. Gen. William Dean, who had been cut off by advancing North Korean forces.

Kim was shot eight times, and died along with 27 commandos participating in the mission. Only three commandos survived, pulling out of Daejeon on the bullet-riddled train. The mission failed, as the commandos were unable to link up with the trapped Americans, according to the citation for the award.

On Tuesday, nearly 62 years after his death on July 19, 1950, Kim was honored with the Office of the Secretary of Defense&rsquo;s Exceptional Public Service Award during a ceremony at U.S. Army Garrison Yongsan in Seoul.

Kim&rsquo;s widow, now in her 90s and suffering from dementia, did not attend, but several of the couple&rsquo;s children and grandchildren accepted the award on his behalf.

&ldquo;I&rsquo;m aware that this is a very late gesture, but please accept our consolation for your very great loss,&rdquo; Chung Chang-young, president of KORAIL, the Korea Railroad Corporation and Kim&rsquo;s employer, told family members.

Chung said Kim, who is buried at a national cemetery reserved for veterans and figures of national importance, volunteered for the mission knowing there was very little chance he would survive.

&ldquo;Mr. Kim&rsquo;s heroic action has taught us the true meaning of courage and sacrifice,&rdquo; he said.

U.S. Forces Korea spokesperson Jennifer Buschick said the U.S. and South Korean militaries learned of Kim&rsquo;s story several years ago during preparations for 60th anniversary commemorations of the war, which began in June 1950, and wanted to recognize his sacrifice.

Gen. Kwon Oh-sung, deputy commander of the Combined Forces Command, said that of the more than 19,000 train drivers who participated in military transport operations during the war, 287 were killed in action.

Kim&rsquo;s son, Kim Je Keun, was two years old when his father died and doesn&rsquo;t remember him, though he said others have described him as friendly and well-liked. Kim followed in his father&rsquo;s footsteps and worked for KORAIL, though he eventually quit and became a farmer to live near his mother.

Kim, who attended the ceremony with his sister, said he is proud of his father, who was the only engineer available to drive the train.