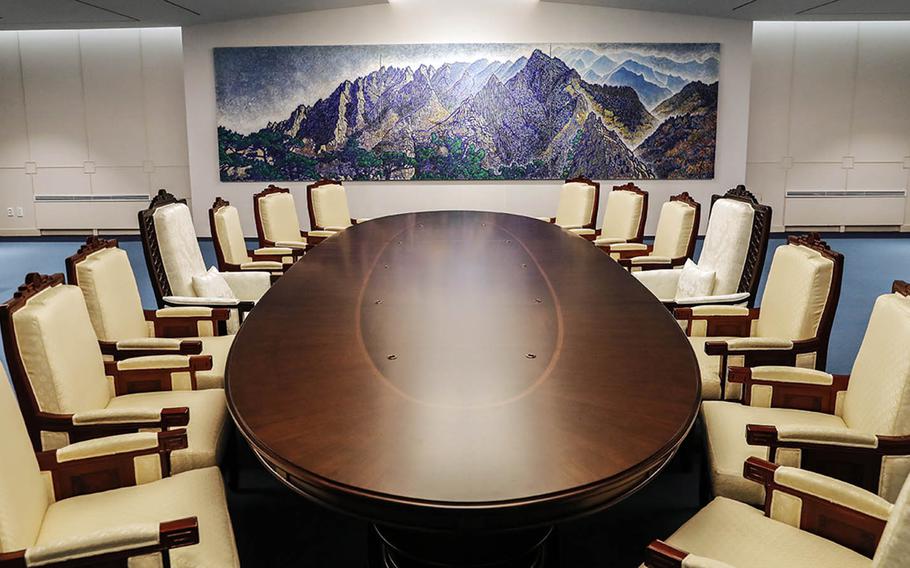 The table and chairs that will be used for the summit between North Korean leader Kim Jong Un and South Korean President Moon Jae-in. The oval-shaped table is exactly 2,018 millimeters in diameter to highlight the historic 2018 summit, according to the president's office. (Courtesy of Inter-Korean Summit Press Corps)

The table and chairs that will be used for the summit between North Korean leader Kim Jong Un and South Korean President Moon Jae-in. The oval-shaped table is exactly 2,018 millimeters in diameter to highlight the historic 2018 summit, according to the president's office. (Courtesy of Inter-Korean Summit Press Corps) 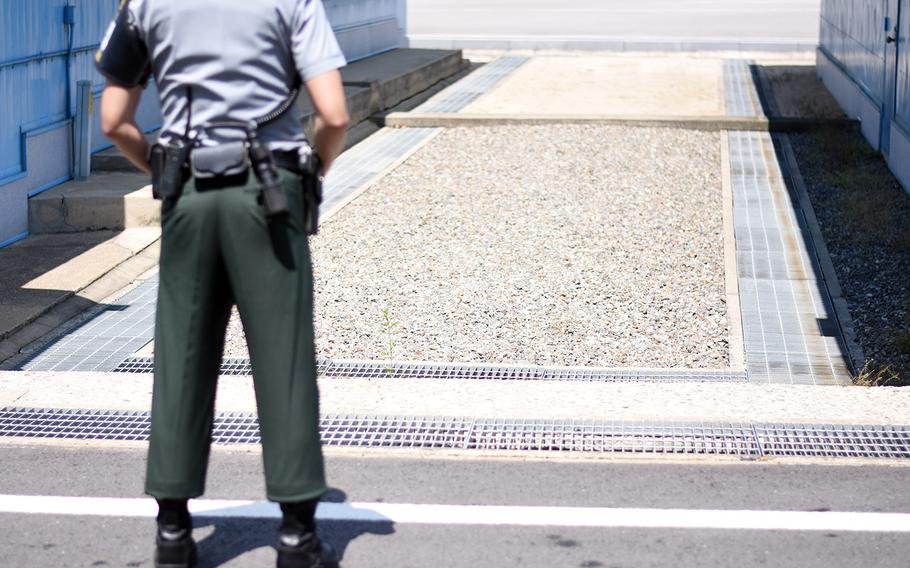 Buy Photo
A South Korean soldier stands guard last year near the border with North Korea in the Joint Security Area of the Demilitarized Zone. (Aaron Kidd/Stars and Stripes)

SEOUL, South Korea — North Korean leader Kim Jong Un will walk across the border Friday to begin a highly choreographed summit with South Korean President Moon Jae-in. But it’s not all about them.

The high-stakes talks will be a prelude to the upcoming meeting between Kim and President Donald Trump, who has said he will accept nothing less than an agreement by the North to abandon its nuclear weapons program.

Moon, who was swept into office last year after his hard-line predecessor was ousted, faces a delicate balancing act in keeping both Kim and Trump at the table after a year that saw the two men trading personal insults and threats of nuclear war.

That won’t leave a lot of room for inter-Korean relations because any economic concessions would risk violating international economic sanctions aimed at punishing the North for its nuclear ambitions.

“Unless North Korea makes progress on the nuclear issue, no improvement can be made in relations,” senior presidential adviser Moon Chung-in said Thursday at a news conference.

“Our government does not want to send the wrong message to Washington,” he added.

That will make Moon’s job considerably harder than that of his liberal predecessors, who met with Kim’s father in 2000 and 2007.

Those summits resulted in the establishment of the joint Kaesong industrial complex and reunions for families who were torn apart by the 1950-53 war, which ended in an armistice instead of a peace treaty.

Moon faces even more of an uphill battle after more than a year of animosities, with the North demonstrating rapid progress toward its goal of developing a nuclear weapons that could target the U.S. mainland.

“So much weight is on the second summit that maybe they can’t push the inter-Korean relations as much as they’d like to,” said John Delury, a professor of international relations at Seoul’s Yonsei University.

No date or venue has been set for what would be the first-ever U.S.-North Korean summit, although Trump has said it will be in May or early June.

Improving relationsExperts said the inter-Korean summit isn’t likely to result in a major announcement on denuclearization but could reach a framework, or at least a declaration of intent, to pave the way for Trump.

“I think North Korea will announce its plan with some conditions. I think these conditions are what will matter,” said Geun Lee, a professor of international politics at Seoul National University.

All sides already have made some concessions.

Kim has announced a moratorium on intercontinental ballistic missile tests and said the North will close its northeastern nuclear testing site.

Skeptics noted that Kim could resume missile tests at any time. A group of Chinese scientists also has said it believes the mountain covering the nuclear testing site has collapsed already.

But Trump welcomed the move, calling it “Big progress!”

The U.S. and South Korean militaries, meanwhile, decided to suspend joint war games on Friday in a nod to the North, which considers the military exercises a rehearsal for an invasion.

That followed an agreement to postpone the start of the annual drills as Moon lobbied the North to join the Winter Olympics, putting the diplomatic process in motion.

A summit with Trump also would be a major gain for Kim, as a meeting with a sitting U.S. president has been a longtime goal for the regime.

Cheong Seong-chang, director of the Unification Strategy Studies program at the Sejong Institute, said distrust between the U.S. and North Korea is too high for the two countries to reach an agreement alone.

“The South Korean government is showing great willingness to establish good relations with Pyongyang. It also has an intimate alliance with the U.S. That means South Korea has the ability to mediate the differences between North Korea and the U.S.,” he said at a forum last week.

“If the inter-Korean summit can create a working draft that can be finalized at the Kim-Trump summit, the latter is more likely to proceed successfully,” he added.

Strong symbolismFirst up to bat, South Korea isn’t taking any chances, sparing no details in planning the historic meeting.

Moon will be at the Military Demarcation Line to welcome Kim, who will become the first North Korean leader to enter the southern section of the heavily fortified border region since the armistice.

The two leaders then will walk together for about 10 minutes to a plaza, where they will inspect a South Korean honor guard, presidential spokesman Im Jong-seok told reporters Thursday.

The men will sign a guest book and will take a photo together at the so-called Peace House before beginning formal talks. Kim will be accompanied by a high-­powered delegation, including sister Kim Yo Jong, although it wasn’t yet clear if his wife, Ri Sol Ju, will attend, Im said.

Following the first round of talks, the leaders will plant a pine tree on the border using a mixture of soil and water from mountains and rivers in both countries, according to Im.

There also will be a stone plaque for the tree engraved with the phrase “peace and prosperity are planted” as well as the leaders’ signatures.

Moon and Kim then will stroll together to a footbridge before convening for afternoon talks, which are expected to be followed by a joint agreement and a banquet.

The conference table that will be used for the talks is exactly 2,018 millimeters wide, commemorating the year the meeting is being held, according to the South Korean president’s office.

The menu for the banquet also is loaded with symbolism, including versions of Swiss dishes inspired by the fact that Kim is believed to have gone to school in Switzerland.

One dessert being offered is a mango mousse decorated with a blue map symbolizing a unified Korean Peninsula. The map will include a dot representing the small island of Dokdo, which is at the center of a territorial dispute with Japan. Tokyo has protested the inclusion of the island.

The main dishes will include fish from the southern area, where Moon was born to North Korean refugees, as well as croaker and rice from the towns of former South Korean presidents, the late Kim Dae-jung and Roh Moo-hyun, who met with Kim’s father in the previous summits in 2000 and 2007.

Grilled beef from cattle at a ranch in the central town of Seosan also will be served. The ranch became famous in 1998 when the late founder of Hyundai, Chung Ju-yung, sent 1,001 cattle to the North as part of reconciliation efforts.

North Korea has agreed to bring “naengmyeon,” or cold buckwheat noodles — a beloved dish in both countries — made by the head chef of the well-known Okryugwan restaurant in Pyongyang.